The Grote Markt (Dutch) or Grand Place (French) is the central market square of Brussels. It is surrounded by guild houses, the city's Town Hall and the Bread House. The square is considered to be one of the most beautiful town squares in Europe.

Archduchess Isabella, daughter of Philip II of Spain wrote about the square during her visit to Brussels on September 5, 1599: Never have I seen something so beautiful and exquisite as the town square of the city where the town hall rises up into the sky. The decoration of the houses is most remarkable.[1]

The Grand Place was named by UNESCO as a World Heritage Site in 1998. It became one of the first of nine sites listed for Belgium.

The Grand-Place in Brussels is a homogeneous body of public and private buildings, dating mainly from the late seventeenth century. The architecture provides a vivid illustration of the level of social and cultural life of the period in this important political and commercial center.

It was chosen as a World Heritage Site because of its preservation of the eclectic and highly successful blending of architectural and artistic styles that characterizes the culture and society of the region. Also because the Grand Place illustrates in an exceptional way the evolution and achievements of a highly successful mercantile city of northern Europe at the height of its prosperity.

Did you know?
Grand Place, the central market square of Brussels, is considered to be one of the most beautiful town squares in Europe.

The original site of Grand Place was a sand bank between two brooks which ran downhill to the Senne River. Once the sand bank was reclaimed it turned into the Niedermerckt, or lower market. By the twelfth century Brussels had become a commercial crossroads between Bruges (in Flanders), Cologne, and France. English wool, French wines and German beer were sold in the harbor and on the market.

During the early Middle Ages small wooden houses were scattered around the market, but beginning in the fourteenth century the rich and powerful patrician families began to build stone mansions. Gradually the market turned into the main commercial and administrative center of the city.[1]

The original Grand Place was a medley of buildings constructed between the fifteenth and seventeenth centuries in a variety of styles. 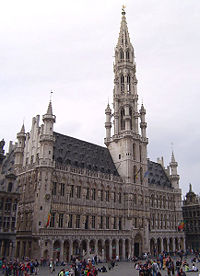 The Town Hall was constructed between 1402 and 1455. The original architect was probably Jacob van Thienen. The gothic tower was designed by architect Jan van Ruysbroeck. At the top of the 97 meter (318 feet) tower stands a statue of St. Michael, the patron of Brussels.

The Grand Place was first laid out after the construction of the town hall, at the center of the city's commercial district. Neighboring streets still reflect the area's origins, named after the sellers of butter, cheese, herring, coal and so on. 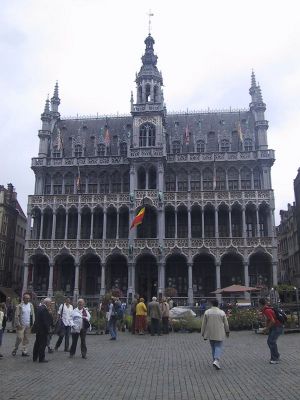 Opposite the Town Hall stands the neo-gothic Maison du Roi in French or "Broodhuis" in Dutch. It is now the historical City Museum.

The Dutch name "Broodhuis" (bread house) indicates the origins of the building. In the beginning of the thirteenth century a wooden structure was where the bakers sold their bread. In 1405 a stone building replaced the original wooden bread hall. In the early fifteenth century, when the bakers turned to selling their products from house to house, the building began to be used more and more for administrative purposes by the Duke of Brabant. When the duchy fell to the Habsburgs, the Maison du Duc (Duke's house) became the Maison du Roi (King's house), the latter being the current French name of the building. During the reign of Emperor Charles V, the King's House was rebuilt in a Gothic style between 1515 until 1536.

The House of the Dukes of Brabant

A group of seven houses, called The Dukes of Brabant is also a part of the Grand Place. On the first floor, under the windows of each building, the statues of the dukes can be seen. No duke or king actually lived here. The names of the houses are: The Fame, The Hermit, The Fortune, The Windmill, The Tin Pot, The Hill, The Beurs.

The name guild houses is most commonly used for the entire set of houses, although in reality they did not all belong to the medieval guilds. Some of the houses were always privately owned. During the Middle Ages and later every city in the Low Countries had guilds or corporations which always had a stake in the city administration. Because they were very wealthy and politically powerful, their importance had to show in their houses in which they regularly met to discuss new rules or regulations within their specific trade or commerce.

On August 13, 1695, a 70,000-strong French army under Marshal François de Neufville, Duke of Villeroy began a bombardment of Brussels in an effort to draw the League of Augsburg's forces away from their siege on French-held Namur in what is now southern Belgium. The French launched a massive bombardment of the mostly defenseless city center with cannons and mortars, setting it on fire and flattening the majority of the Grand Place and the surrounding city. The Town Hall was the principal target of the artillery fire, but more than 4000 houses were completely destroyed. Only the stone shell of the Town Hall and a few fragments of other buildings remained standing.

The square was rebuilt in the following four years by the city's guilds. Their efforts were regulated by the city councilors and the Governor of Brussels, who required that their plans be submitted to the authorities for their approval. This helped to create a harmonious layout for the rebuilt Grand Place, despite the ostensibly clashing combination of Gothic, Baroque and Louis XIV styles.

The Dutch emperor William I left the Belgian region in 1830 after a successful struggle for independence by the Belgian people. In 1831 the first Belgian king, Leopold I, ascended to the throne. Brussels became the capital of the new kingdom of Belgium. A long period of rebuilding the city of Brussels started and at this point new buildings were built, the city walls were demolished and the city expanded. 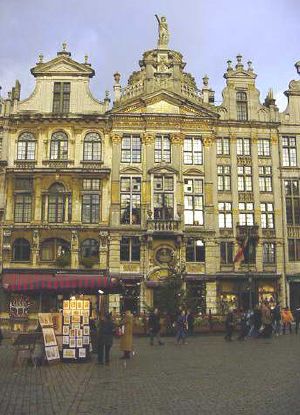 In 1860 the mayor of Brussels, Jules Anspach, had convinced the city authorities to buy the old King's House which was then in a sorry state. The entire building had to be rebuilt from scratch. The restoration was done in the then fashionable neo-gothic style. The architect Jamaer was influenced by the early sixteenth century town hall of the City of Oudenaarde.

During the later part of this rebuilding Charles Buls emerged as the champion of historic preservation. He became the Mayor of Brussels in 1881 and remained in office until 1899. His most lasting achievement was his opposition to the grandiose architectural schemes of King Leopold II, and the resulting preservation of old parts of Brussels. In particular, Buls was a steadfast defender and admirer of the Mont des Arts and the Grand Place, successfully proposing the 1883 city ordinance protecting the facades of the Grand Place buildings and providing funds for their restoration, which took place between 1883 and 1923.

In 1887 the King's House became the City Museum of Brussels. On exhibition are original statues of the town hall, paintings, wall tapestries and different artifacts which have a relation to the history of the city.

In 1899, the architects of Brussels who had been involved in this restoration work paid for a memorial commemorating Buls, designed by Victor Horta and executed by Victor Rousseau, to be placed in the rebuilt L'Etoile or De Ster house on the Grand Place.

Currently the Grand Place is the main tourist attraction of the City of Brussels. Concerts and musical events are organized all through the year on the square. The most famous events are the annual Ommegang and the biennial Flower Carpet.

On the first Thursday in July, Grand Place is the site of Brussels' Ommegang Pageant. It is an historical evocation of the festival held in 1549 for Charles V, his son Don Philip, infant of Spain and Duke of Brabant, and his sisters, Eleanor of Austria, Queen of France and Mary of Hungary. The first mention of the Ommegang dates from 1359 when the procession was initially religious in nature. Today the Ommegang of Brussels has entirely lost its religious character and is now mainly folkloric.[2]

The Flower Carpet is an event held every two years in August at the Grand Place. It involves more than 300 square meters covered with a massive 800,000 fresh begonias. The blooms are so closely packed they create their own microclimate. Volunteers place the flowers in the giant design in four hours, with spaces in the design filled in with sod. If the weather is too hot the sod is watered; if it is wet the grass may grow several centimeters during the four days.[3]

Landscape architect E. Stautemans originated the idea and created the first carpet for Brussels in 1971. He and others hoped to promote begonias, native to the West Indies but intensively cultivated in and near Ghent since 1860.

Retrieved from https://www.newworldencyclopedia.org/p/index.php?title=Grand_Place&oldid=1097401
Categories:
Hidden category:
This page was last edited on 24 January 2023, at 12:17.
Content is available under Creative Commons Attribution/Share-Alike License; additional terms may apply. See Terms of Use for details.