The George Washington and Jefferson National Forests are combined United States National Forests that form one of the largest areas of public land in the Eastern United States. The forests cover 1.8 million acres (7,300 km²) of land in the Appalachian Mountains of Virginia, West Virginia, and Kentucky. The forest extends along the entire length of the Blue Ridge Mountains and the Allegheny Mountains south to the North Carolina border. The northern portion of the Blue Ridge Parkway extends through the Forests.

More than one-third of the forest is actively used for timber harvesting, the bulk of which is used for furniture manufacture and pulp for paper products. Approximately one million acres (4,000 km²) of the forest are remote and undeveloped and 89,862 acres (363.66 km²) have been designated as wilderness areas, eliminating future development. More than 2,000 miles (3,000 km) of hiking trails including the Appalachian Trail go through the forest. The forests are also home to more than 500 various species of plants and trees.

The forests are popular destinations for hiking, camping, mountain biking, hunting, and fishing. Deer, wild turkeys, bear, and other wildlife once hunted almost to extinction have recovered their numbers in protected habitats within the forests and are once again thriving. Fish are plentiful in the forests streams and lakes. 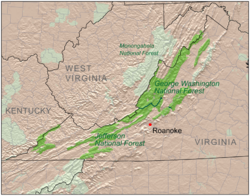 Map showing the location of the George Washington and Jefferson National Forests. 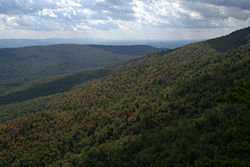 Virginia's highest point, Mount Rogers, is located in the Mount Rogers National Recreation Area, which is part of the forest. Other notable mountains include Elliott Knob, which has one of the last remaining fire lookout towers in the eastern U.S., and White Top Mountain.

There are over 500 species of trees and plants and the forest is dominated by various species of oaks and hickories, with maples and pines also common. The American black bear is common enough that there is a short hunting season to prevent overpopulation. White-tailed deer, bobcat, bald eagles, weasel, otter, and marten are also known to inhabit the forest. The streams and lakes in the forests contain bass as well as brook, brown, and rainbow trout.

Starting in the early 1900s, an ecological catastrophe hit the forests of southwestern Virginia. By the mid 1930s, a fast-spreading introduced fungus, the chestnut blight, had virtually eliminated the American chestnut, so highly prized for its timber value and its abundant crop of nuts used by both man and wildlife. Before the blight, in some parts of the Forest, the chestnut was the dominant tree, accounting for up to 70 percent of the total number of trees in some stands. 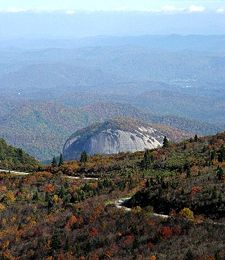 Pilot Mountain as seen from Virginia.

As more people moved into western Virginia, the settlers often viewed the forests as land that had to be cleared for more fields. The mountain lands, though eroded and overcultivated, were still desired by outside mining and timber interests. In the 1820s the combination of iron and trees to feed the iron furnaces made mining a profitable venture in many areas near the Shenandoah Valley. Repeated cuttings cleared the mountains, erosion caused streams to become clogged with silt, and floods came more frequently and caused greater damage. Perhaps the most insidious effect of industry was wildfire, which burned repeatedly over the mountains. Miners, timber operators, and hunters pushed animal species like elk, white-tailed deer, and wild turkey to the brink of extinction. Only the discovery of large deposits of higher-quality iron ore in the Great Lakes States ended the demand for Virginia iron.

As early as 1901, James Wilson, U.S. Secretary of Agriculture, recommended establishing a forest preserve in the Southern Appalachians in these words:

These are the heaviest and most beautiful hardwood forests of the continent. In them, species from East and West, from North and South, mingle in a growth of unparalleled richness and variety. They contain many species of first commercial value and furnish important supplies which cannot be obtained from any other region. … The preservation of these forests is imperative. … Their management under practical and conservative forestry will sustain and increase the resources of this region and of the Nation at large.

A small group of forest reformers introduced bills in Congress to protect the nation's forests. In 1891, the Forest Reserve Act was passed that authorized the creation of Forest Reserves, the forerunner of what was to become the National Forest system.

In 1902, the state legislature of Virginia passed a resolution expressing support for the establishment of an extensive national forest in Virginia and in the southern Appalachians. With this resolution, the state granted the federal government the right to acquire "Forest Reserve" land and at the same time relinquished its right to tax these lands once they became National Forests.

Support for establishing National Forests in the southern Appalachians came from the private sector as well. In 1902, the National Lumber Manufacturers Association threw its support behind the idea, and in 1905 the American Forestry Association also endorsed creation of National Forests in the Appalachians. The battle in Congress took almost 10 years, but finally, in 1911, President William Howard Taft signed the Weeks Law authorizing the purchase of deforested land to protect it for watershed purposes.

In 1911, 13,450 acres of land was bought from Douglas Land Company in the Whitetop "Purchase Unit" in what is now the Mount Rogers National Recreation Area in far southwestern Virginia. Nine years later, in 1920, this purchase would be combined with other newly acquired lands in Tennessee and North Carolina to form the Unaka National Forest.

Finally on April 21, 1936, Franklin Delano Roosevelt created the Jefferson National Forest out of lands formerly contained in the Unaka and Natural Bridge National Forests, and the Clinch and Mountain Lake Purchase Units. At a dedication ceremony held on July 1, 1937, Under-Secretary of Agriculture M.W. Wilson noted that "President Roosevelt has named it the Jefferson. This is fitting, for Thomas Jefferson was a practical conservationist, and this National Forest embraces much of the country he knew and loved. He knew that man's welfare depended in large part on use of natural resources."

In his dedication speech, Wilson went on to describe the value of the Jefferson National Forest:

To control erosion and floods … as sources of inspiration and recreation, they foster spiritual, cultural and other values essential to mankind. As a living resource they can be renewed … producing continuous crops for harvest. Forests help stabilize industries and communities and add to man's physical welfare … [providing] … the greatest good to the greatest number in the long run.

The Cascades along the Blue Ridge Parkway

The Civilian Conservation Corps (CCC) also played an important role in the early days of the Forest Service. The first CCC camp in the nation, Camp Roosevelt, was located in the George Washington National Forest. A total of 14 camps were eventually opened on the Forest's lands. The CCC employed 9,200 men in Virginia during the nine years of the program's existence. Their work is still evident today in the roads, campgrounds, picnic shelters, fire towers, and other projects scattered throughout the Forest.

Between 1945 and 1956, the number of visitors to some areas increased as much as four times. With its proximity to Washington, D.C., and Richmond, Virginia, George Washington National Forest has always been a popular destination for those who enjoy outdoor recreation.

By 1938, most large and small game had been nearly wiped out due to over-harvesting and habitat destruction. That year, the Virginia Commission of Game and Inland Fisheries and the National Forests in Virginia entered into the first cooperative agreement of its kind in the nation. Under this agreement, the two agencies would work closely together to restore wildlife habitat and begin the process of rebuilding huntable game populations on National Forest land. This partnership served as a national model for many other National Forests across the country.

In 1960, the Multiple-use Sustained-Yield Act was passed by Congress. It stated that national forests shall be administered for outdoor recreation, watershed, range, timber, and wildlife purposes. A wildlife management agreement with the Virginia Department of Game and Inland Fisheries has helped to reestablish turkey, bear, deer, and many other species that were nearly driven to extinction due to unregulated hunting and poor land management practices during the late 1800s. The Threatened and Endangered Species Act of 1973 has also served to protect wildlife and their habitat. 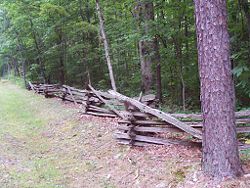 A split rail fence at the entrance to Sherando Lake

The forests are popular hiking, camping, mountain biking, hunting, and fishing destinations. The Appalachian Trail extends for 330 miles (530 km) from the southern end of Shenandoah National Park through the forest and along the Blue Ridge Parkway. The forest is within a two-hour drive for more than 10 million people and receives heavy visitation, especially in the region closest to Shenandoah National Park. Swimming is available in several mountain lakes. Both primitive and developed campgrounds are located throughout the forests.

The George Washington National Forest is a popular destination for trail runners. It is the location for several Ultramarathons, including the Massanutten Mountain Trails 100 miler, the Old Dominion 100 miler, and the Old Dominion Memorial 100 miler. Other activities available include hawk watching, cross-country skiing, horseback riding, nature photography, and orienteering.

Retrieved from https://www.newworldencyclopedia.org/p/index.php?title=George_Washington_and_Jefferson_National_Forests&oldid=869924
Categories:
This page was last edited on 2 December 2008, at 20:36.
Content is available under Creative Commons Attribution/Share-Alike License; additional terms may apply. See Terms of Use for details.