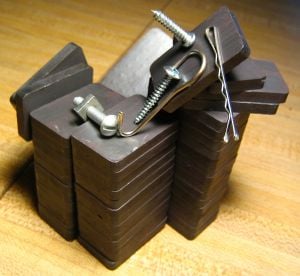 A stack of ferrite magnets.

Ferrites are a class of ferrimagnetic ceramic chemical compounds consisting of mixtures of various metal oxides, usually including iron oxides. Their general chemical formula may be written as AB2O4, where A and B represent different metal cations.

These materials are used in a variety of applications. For example, ferrite cores are used in electronic inductors, transformers, and electromagnets; ferrite powders are used in the coatings of magnetic recording tapes; and ferrite particles are a component of radar-absorbing materials. In addition, radio magnets (such as those used in loudspeakers) are usually ferrite magnets.

Ferrites are electrically non-conductive ferrimagnetic ceramics. They are usually mixtures of iron oxides, such as hematite (Fe2O3) or magnetite (Fe3O4), and oxides of other metals. Like most other ceramics, they are hard and brittle. In terms of their magnetic properties, they are often classified as "soft" or "hard," referring to low or high coercivity of their magnetism, respectively.

Ferrites that are used in transformer or electromagnetic cores contain nickel, zinc, or manganese compounds. They have a low coercivity and are called soft ferrites. Because of their comparatively low losses at high frequencies, they are extensively used in the cores of Switched-Mode Power Supply (SMPS) and radio frequency (RF) transformers and inductors. A common ferrite, abbreviated "MnZn," is composed of the oxides of manganese and zinc.

In contrast, permanent ferrite magnets (or "hard ferrites"), which have a high remanence after magnetization, are composed of iron and barium or strontium oxides. In a magnetically saturated state they conduct magnetic flux well and have a high magnetic permeability. This enables these so-called ceramic magnets to store stronger magnetic fields than iron itself. They are the most commonly used magnets in radios. The maximum magnetic field B is about 0.35 tesla and the magnetic field strength H is about 30 to 160 kiloampere turns per meter (400 to 2000 oersteds) (Hill 2006).

Ferrites are produced by heating an intimate mixture of powdered precursors (which are often carbonates of the metals chosen) and then pressed in a mold. During the heating process, calcination (thermal decomposition) of carbonates occurs. The general reaction of a metal carbonate (where M is the metal ion) may be written as follows:

For example, barium carbonate (BaCO3) and strontium carbonate (SrCO3) are converted to their oxides, BaO and SrO, respectively. The resultant mixture of oxides undergoes sintering (in which the solid particles adhere to one another). The cooled product is then milled to tiny particles (smaller than two micrometers (μm)), the powder is pressed into a shape, dried, and re-sintered. The shaping may be performed in an external magnetic field, to achieve a preferred orientation of the particles (anisotropy).

Small and geometrically easy shapes may be produced with dry pressing. However, in such a process small particles may agglomerate and lead to poorer magnetic properties compared to the wet pressing process. Direct calcination and sintering without re-milling is possible as well but leads to poor magnetic properties.

Electromagnets are pre-sintered as well (pre-reaction), milled, and pressed. However, the sintering takes place in a specific atmosphere, such as that is low in oxygen. The chemical composition and especially the structure vary strongly between the precursor and the sintered product.

Ferrite cores are used in electronic inductors, transformers, and electromagnets, where the high electrical resistance of the ferrite leads to very low eddy current losses. They are commonly seen as a lump in a computer cable, called a ferrite bead, which helps prevent high-frequency electrical noise (radio frequency interference) from exiting or entering the equipment.

Early computer memories stored data in the residual magnetic fields of hard ferrite cores, which were assembled into arrays of core memory. Ferrite powders are used in the coatings of magnetic recording tapes. One such type of material is iron (III) oxide.

Ferrite particles are also used as a component of radar-absorbing materials or coatings used in stealth aircraft and in the expensive absorption tiles lining the rooms used for electromagnetic compatibility measurements.

Most common radio magnets, including those used in loudspeakers, are ferrite magnets. Ferrite magnets have largely displaced Alnico magnets in these applications.

It is a common magnetic material for electromagnetic instrument pickups, because of price and relatively high output. However, such pickups lack certain sonic qualities found in other pickups, such as those that use Alnico alloys or more sophisticated magnets.

Retrieved from https://www.newworldencyclopedia.org/p/index.php?title=Ferrite_(magnet)&oldid=1073478
Categories:
Hidden category:
This page was last edited on 21 July 2022, at 01:08.
Content is available under Creative Commons Attribution/Share-Alike License; additional terms may apply. See Terms of Use for details.