Divine command theory is the metaethical theory that an act is obligatory if and only if, and because, it is commanded by God. It is often argued that divine command theory is confuted by the "Euthyphro dilemma" (so named because a version of it first appeared in Plato's dialogue Euthyphro) which asks, "is an action morally good because God commands it, or does God command it because it is morally good?"

Although philosophers often discuss the divine command theory on purely rational grounds as an ethical theory, the theory also raises questions about the relationship between reason and faith as exemplified in Kierkegaard's philosophy. He discusses Abraham's dilemma of offering his son Isaac by a "leap of faith," a position that transcends the realm of ethics.

In monotheistic terms, this question is rephrased as, "is what is moral commanded by God because it is moral, or is it moral because it is commanded by God?" The latter is a "divine command theory." The dilemma has continued to present a problem for theists since Plato presented it and is still the object of theological and philosophical debate.

Criticisms of the divine command theory

The following are some of the standard objections to the divine command theory:

First, it may imply that morality is arbitrary. If the divine command theory is true, morality is based merely upon God's whim. Divine Command Theory, this objection runs, entails that if it is morally obligatory to do x then this is in virtue of God's commanding that we do x. Thus, if God had commanded that we be cruel and dishonest, and that we not be merciful and charitable then it would have been morally obligatory to do certain harmful (cruel and dishonest) things, and morally impermissible to do certain beneficial (merciful and eleemosynary) things. One reply to this objection denies that God would have commanded such things because, being essentially omnibenevolent, he necessarily does not command evil. Critics of divine command theory suggest that this response is a peritrope; it assumes that God knows that, say, cruelty is evil before he gives the command that, according to divine command theory, makes cruelty bad.

Also, some point out a naturalistic fallacy in the theory. Proponents of this criticism argue that while ethics can and should specify the non-moral properties that make things good, it is always a mistake to use non-moral terms in giving the meaning of the word 'good'. If I ask why I shouldn't commit murder, the divine command answer is: "because God commands you not to," but I can then ask why I should do what God commands. If the answer is that God created me, I can ask why I should obey my creator, and so on. This is not a matter of motivation, but of the explanation of the normativity of morality.

Finally, there is the question of how one comes to know the will of God. Most religions point to their scriptures for answers, but it is still possible to question whether these really state the will of God. Furthermore, few if any religions claim to have texts detailing their deity's will concerning every possible situation. These gaps often concern situations that the writers of ancient religious scriptures couldn't have foreseen, such as those involving advanced technologies, especially biological and medical ones. Because of these problems, critics claim that one can never be sure if a person, including oneself, who claims to know God's will actually does know, or is lying, mistaken, or mad (or indeed if God has subsequently changed his mind, though this possibility is ruled out by many notions of God).

In response to these criticisms, many proponents of divine command theory agree with the point the critic is making but argue that it is not a problem with the theory. For example, writers like William of Ockham (c. 1285 – 1347) argue that if God had commanded murder, then murder would indeed have been morally obligatory. Indeed, Ockham goes so far as to say that God could change the moral order at any time. Thus Ockham embraces the divine command theory wholeheartedly; his view has been characterized as being that "God's command is good" is analytically true. He can be thought of as saying: "God could have commanded us to commit murder, and then it would have been obligatory — but he didn't, so it isn't." It is also possible to bite the bullet regarding the naturalistic fallacy by arguing that defining morality in non-moral terms is not a fallacy at all.

Other writers disagree more directly with these criticisms. Duns Scotus (d. 1308) is responsible for one approach that has been influential in modern times. He argues that, for one set of moral values at least, God could not have commanded otherwise because they are necessary (omnipotence, of course, means being able to do anything, but the logically impossible is essentially nonsensical, and not part of anything). However, this would mean that necessity, not God, is the source of objective morality. God is reduced to a passer-on of moral laws. Some moral values, on the other hand, are contingent on particular decisions of God, and thus he could have commanded otherwise. Thus, for example, that murder is wrong is a truth, and though God commanded us not to murder he couldn't have done otherwise, nor can he revoke his command; keeping the Sabbath day holy, on the other hand, is only contingently wrong, and God could have commanded otherwise and could revoke his command. This is similar to a more recent approach developed by Richard Swinburne.

In developing what he calls a Modified Divine Command Theory, R.M. Adams distinguishes between two meanings of ethical terms like "right" and "wrong": the meaning that Adams explains in roughly emotivist terms, and the meaning that has its place in religious discourse (that is, commanded or forbidden by God). Because God is benevolent, the two meanings coincide; God is, however, free to command other than he has done, and if he had chosen to command, for example, that murder was morally right, then the two meanings would break apart. In that case, even the religious believer would be forced to accept that it was correct to say both that murder was wrong and that God commanded us to commit murder. Saint Thomas Aquinas claimed that God creates moral norms that reflect his own essence, meaning that his demands are not arbitrary. In this case, it would become necessary to examine the essence of God.

There have been two prominent responses to the problem of knowing God's commands. Some writers have argued that the metaethical divine-command theory leads to a normative theory which gives the required moral guidance; that is, God's command gives us the definition of "good" and "bad," but does so by providing practical criteria for making moral decisions. For example, John Gay argued that God had commanded us to promote human happiness, thus marrying divine command theory with a version of utilitarianism. Another response to the epistemological problem was made by the utilitarian Jeremy Bentham. He wrote, "We may be perfectly sure, indeed, that whatever is right is conformable to the will of God: but so far is that from answering the purpose of showing us what is right, that it is necessary to know first whether a thing is right, in order to know from thence whether it be conformable to the will of God." In other words, because God's will and what is right are identical, if we find out what is moral we necessarily discover what God's will is. However, once a human has the practical criteria for determining what is moral, this removes the need for God to dictate morality through divine command. 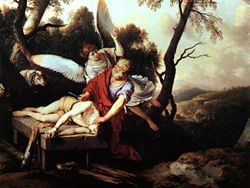 In Fear and Trembling, Johannes de Silentio analyzes Abraham's action to sacrifice Isaac. Silentio argues that Abraham is a knight of faith.

Many philosophers who initially read Kierkegaard, especially Johannes de Silentio's Fear and Trembling, often come to the conclusion that Kierkegaard supports a divine command law of ethics. However, Soren Kierkegaard (through his pseudonym Johannes de Silentio) is not arguing that morality is created by God; instead, he would argue that a divine command from God transcends ethics. This distinction means that God does not necessarily create human morality: it is up to us as individuals to create our own morals and values. But any religious person must be prepared for the event of a divine command from God that would take precedence over all moral and rational obligations. Kierkegaard called this event the teleological suspension of the ethical. Abraham, the knight of faith, chose to obey God unconditionally and was rewarded with his son, his faith, and the title of Father of Faith. Abraham transcended ethics and leaped into faith.

But there is no valid logical argument one can make to claim that morality ought to be or can be suspended in any given circumstance, or ever. Thus, Silentio believes ethics and faith are separate stages of consciousness. The choice to obey God unconditionally is a true existential 'either/or' decision faced by the individual. Either one chooses to live in faith (the religious stage) or to live ethically (the ethical stage).

In Works of Love and Purity of Heart, Kierkegaard skillfully examines Christian ethics and the maxim, Love Thy Neighbour.[2]

Retrieved from https://www.newworldencyclopedia.org/p/index.php?title=Divine_command_theory&oldid=1074767
Categories:
Hidden category:
This page was last edited on 31 July 2022, at 04:18.
Content is available under Creative Commons Attribution/Share-Alike License; additional terms may apply. See Terms of Use for details.