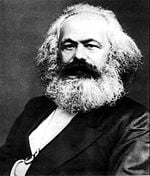 Dialectical materialism is the philosophical expression of Marxism and Marxism-Leninism. The name refers to the notion that Marxism is a materialist worldview with a dialectical method. It was developed by Karl Marx and Frederick Engels in the mid-late eighteenth century and further elaborated by later Marxist theorists.

Dialectical materialism holds that the world, including human beings, is "matter in motion" and that progress occurs through struggle. It follows the Hegelian principle of the philosophy of history, namely the development of the thesis into its antithesis, which is in turn superseded by a synthesis that conserves aspects of the thesis and the antithesis while at the same time abolishing them. While retaining Hegel's dialectical method, however, Marx and Engels reacted against Hegel's idealism. Thus, history is not the result of the progressive unfolding of the Spirit, but of class struggle in society, in which economics is the determining factor. Moreover, while quantitative change may be gradual, qualitative change involves an abrupt, violent leap to a higher stage. In society, this means that only violent revolution can bring about the shift from private ownership to socialism and communism which Marx and Engels envisioned.

All phenomena in the universe consist of "matter in motion." All things are interconnected and develop in accordance with natural law. The physical world is an objective reality and exists independently of our perception of it. Perception is thus a reflection of the material world in the brain, and the world is truly knowable, when objectively perceived.

The ideal is nothing else than the material world reflected by the human mind, and translated into forms of thought (Karl Marx, Das Kapital, Vol. 1).

Marx thus endorsed a materialist philosophy against Hegel's idealism. However, he also criticized classical materialism as type idealist philosophy. According to his and Engels' Theses on Feuerbach (1845), philosophy had to stop "interpreting" the world in endless metaphysical debates, in order to start "transforming" the world. The rising workers' movement, observed by Engels in England and by Marx in France and Germany, was engaging in precisely that transformational revolution.

Historical materialism—the application of dialectical materialism to the analysis of history—thus affords primacy to class struggle over philosophy per se. Philosophy, in fact, is not an objective science but a partisan political act. In this sense, classical materialism—which tended to justify the social status quo—was no better than the outright Idealism of Kant or Hegel's philosophies. "True" philosophy must take the correct position in the class struggle, and the function of Marxist philosophy is to do exact that.

The materialism of Marx and Engels later opened up the way for the Frankfurt School's critical theory, which combined philosophy with the social sciences in an attempt to diagnose the ailments of society. In the later Marxist movement centering on the Soviet Union, however, dialectical materialism would be reduced to the orthodox Marxist theory known as diamat.

Engels observed three laws of dialectics. They are:

The first of these laws was also seen by both Hegel and Lenin as the central feature of a dialectical understanding of things. It has been traced to the ancient Greek philosopher Heraclitus. The second is taken by Hegel from Aristotle, and may be traced to the ancient Ionian philosophers (particularly Anaximenes), from whom Aristotle inherited the concept. The third, the negation of the negation, is Hegel's distinct expression. It refers to the idea a thesis generating its antithesis or negation, which is in turn negated by a synthesis.

The principal features of Marxist dialectics are:

Being concerned primarily with history and society rather than philosophy per se, Marx and Engels were particularly concerned with the application of their philosophy to historical and political reality. The result came to be known as historical materialism.

According to this theory, the primitive communism of tribal societies represented the original "thesis" of human development. This generated the antithesis of private ownership and class society. The synthesis—emerging after various stages of historical development such as slavery, feudalism, mercantilism, and capitalism—will be advanced communism, in which the workers own the means of production in an advanced industrialized society. However, just as a chick must break out of the shell which both protects and encases it, the working class must break free from the institutions of repression which capitalist society has created in order to perpetuate itself. Because such qualitative changes are always sudden and violent, this necessitates a violent revolution and the establishment of a dictatorship of the proletariat as a first step to achieving first socialism, and then the gradual withering away of the state into advanced communism.

According to the Marxist principle of the "partisanship of philosophy," the avowed purpose of this intellectual exercise for Marx and Engels was to create an ideology as a catalyst toward developing revolutionary class consciousness. Indeed, Marx and Engels saw themselves not so much as philosophers but as the voices of a historical inevitability: 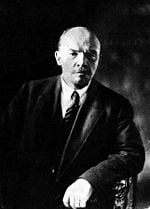 Lenin based his work on that of Engels, and also addressed the writings of more recent philosophers, often in biting and satirical form. He took on the task of distancing Marxist materialism from several other forms of materialist philosophy:

He also took on several Marxist thinkers whom he deemed to have improperly understood the implications of dialectical and historical materialism, resulting in their adopting an insufficient revolutionary outlook based on gradual change and "bourgeois-democratic" socialism. Lenin insisted that gradualism could never achieve qualitative change in the economic base of society.

Following the 1917 October Revolution, the Soviet philosophy divided itself between "dialecticians" (Deborin) and "mechanists" (Bukharin).Stalin ultimately decided the outcome of the debate by publishing a decree which identified dialectical materialism as pertaining solely to Marxism-Leninism rather than any other form of materialism. Stalin would also use diamat as a justification for the establishment of the totalitarian state. In June 1930, he told the Soviet party congress:

Stalin then established the official Soviet version of dialectical materialism in his work, Dialectical and Historical Materialism (1938).[1] Here, he enumerated the "laws of dialectics," which are to serve as the grounds of particular scientific disciplines, especially sociology and the "science" of history, thus guaranteeing their conformity with what he called the "proletarian conception of the world." Thus, the official Soviet philosophy of diamat was imposed on most Communist parties affiliated to the Third International. Under the Stalinist regime and its successors, academic discussion in Soviet intellectual institutions and journals would be constrained to stay within the line of Stalinist philosophical orthodoxy.

As early as 1937, Mao Zedong proposed yet another interpretation, in his essay On Contradiction, in which he rejected Engels' "laws of dialectics" as oversimplified and insisted on the complexity of the contradiction. Mao's text inspired Louis Althusser's work on contradiction, which was a driving theme in his well-known essay For Marx (1965). Althusser attempted to nuance the Marxist concept of contradiction by borrowing the concept of "overdetermination" from psychoanalysis. He criticized the Stalinist "teleological" reading of Marx as a return to Hegel's idealism in which philosophy supersedes reality. Another school of thought, led by Italian philosopher Ludovico Geymonat, constructed a "historical epistemology" from dialectical materialism.

For more than 70 years in the Soviet Union and its satellite countries, dialectical materialism was the official guiding philosophy of state. It attempted to deal with all questions of existence, from atoms to history and economics. It became them most important atheistic ideology of the twentieth century, absolutely denying even the possibility of God's existence and affirming the need for violent revolution that would do away with religion, which it insisted was merely the "opiate" of the masses.

More than a billion young people in the former Soviet Union, China, and many other countries were indoctrinated into the worldview of dialectical materialism in schools from kindergarten through college. In the context of the totalitarian societies which it spawned, dialectical materialism stifled the creative spirit of two entire generations who grew up under Soviet-style rule. The former Communist world even today is still struggling to recover from dialectical materialism's tragic legacy, a philosophy designed to liberate the workers of the world but which itself ended up in the dust bin of history.