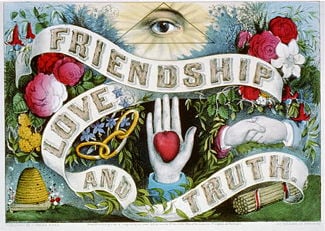 It was founded in New York, in 1835, by Nathaniel T. Currier (1813-88), who had been apprenticed as a youth to the Boston lithographic firm of William S. & John Pendleton. Currier & Ives' lithographs initially appeared under Currier's imprint (his earlier lithographs had been issued in 1834, under the name of Stodart & Currier), and the name Currier & Ives first appeared in 1857, when James Merritt Ives (1824-95), the company's bookkeeper and Currier's brother-in-law, was made a partner.

In the early nineteenth century, newspapers lacked photographs; but the public was interested in some source of pictures of recent news stories. The success of Currier & Ives was part of the larger story of widespread American upward mobility and the mechanization of publishing.[1]

Nathaniel T. Currier was born in Roxbury, Massachusetts, to Nathaniel and Hannah Currier. He attended public school until age fifteen, when he was apprenticed to the Boston printing firm of William and John Pendleton. The Pendletons were the first successful lithographers in the United States, lithography having only recently been invented in Europe, and Currier learned the process in their shop. He subsequently went to work for M. E. D. Brown in Philadelphia, in 1833. The following year, Currier moved to New York City, where he started a new business with John Pendleton. Pendleton backed out, and the new firm became Currier & Stodart, which lasted only one year. In addition to being a lithographer, he was also a volunteer firefighter in the 1850s.

James Merritt Ives was born on March 5, 1824, on the grounds of Bellevue Hospital, where his father was the superintendent. He went to work at the age of twelve; however, he continued his education by visiting art galleries and reading at the Astor Library. He married Caroline Clark in 1852, with whom he had two sons and four daughters. Caroline was the sister-in-law of Nathaniel Currier's brother, Charles Currier, who recommended Ives to his brother. He was hired as a bookkeeper in 1852. However, his talent as an artist, artistic knowledge, and insight into what the public wanted proved invaluable to Nathaniel Currier. Almost immediately after being hired, he became the general manager of the firm. Helping Currier interview potential artists, craftsman, and selecting images the firm would publish, he was made a full partner in 1857. The name of the firm changed from N. Currier lithographer to Currier & Ives.Old Print Shop, [2]

Lithography began in America in the 1820s. It was quicker and less expensive than engraving, hence the remarkable success of the firm of Currier and Ives. Soon after setting up business, they produced extensive folios, usually based on paintings. Some of the work was crude, but the quality varied considerably. The star artists of the firm were Arthur F. Tait, who specialized in sporting scenes; Louis Maurer, who executed genre scenes; Fanny Palmer, who liked to do picturesque panoramas of the American landscape; and George H. Durrie, who supplied winter scenes.

In 1835, Currier produced the print, Ruins of the Planter's Hotel, New Orleans, Which Fell at Two O’clock on the Morning of the 15th of May 1835, Burying 50 persons, 40 of whom Escaped with their Lives, which was moderately successful. 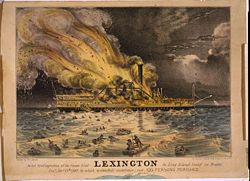 In 1840, he produced Awful Conflagration of the Steam Boat LEXINGTON In Long Island Sound on Monday Eveg, Jany 13th, 1840, by Which Melancholy Occurrence over 100 PERSONS PERISHED, which was very successful. Currier soon had a weekly insert in The New York Sun.

Currier and Ives described itself as "Publishers of Cheap and Popular Pictures." Their pictures were hugely popular; in 1835–1907, Currier and Ives produced more than a million prints by hand-colored lithography. A staff of artists produced the lithographs. The colors were applied by an assembly line, typically German immigrant girls, each of whom added a single color to the print.

The prints depicted a variety of images of American life, including winter scenes; horse-racing images; portraits of people; and pictures of ships, sporting events, and ferocious battles of the American Civil War.

Currier died in 1888. Ives remained active in the firm until his death, in 1895. Because of improvements in offset printing and photoengraving, the public demand for lithographs gradually diminished. Currier and Ives closed in 1907.

Currier and Ives become so well known that it was common to refer to any large mixed batch of prints as Currier and Ives prints. The firm was very prolific and produced prints on practically every aspect of the American scene. In the 1870s, they issued four catalogs featuring 2800 subject titles.

Currier and Ives sometimes focused on current events. (In 1840 Currier produced what may have been the first illustrated "extra" in history when he depicted scenes of the fire that had broken out that year aboard the steamship Lexington in Long Island Sound.) Political cartoons and banners were commonly produced, like the Presidential Fishing Party of 1848, showing the candidates with fishing poles trying to hook fish on which names of various states are inscribed.

The firm of Currier & Ives, which produced two to three new images every week for 64 years (1834-1895), is estimated to have produced 7,450 different images. The small works sold for 20 cents each and the large works sold for $1 to $3 each. The Currier & Ives firm ran a shop in New York City and also consigned prints to pushcart vendors, peddlers, and book stores and sold work through the mail. The works were sold internationally through a London office and agents throughout Europe.

The firm closed in 1907, and today the works are highly prized as valuable records of popular taste and works of art in their own right.[3] 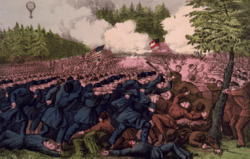 Historical prints were another specialty and copies from the historical paintings of John Trumbull were especially popular. The Civil War print Battle of Fair Oaks, Va., May 31, 1862, shows the first balloon ever used for warfare observation. Sentimental prints included one showing a married couple walking along a riverbank and another showing a girl taking care of her little sister. There were also prints for children, such as Robinson Crusoe and His Pets and Noah's Ark; country and pioneer home scenes, which included Early Winter, a beautiful scene of people skating on a frozen pond before a snow-covered country cottage; and lithographed sheet music. Still other categories were Mississippi River prints, including On the Mississippi Loading Cotton and Midnight Race on the Mississippi; railroad prints that sometimes featured minute descriptions of trains, as in Lightning Express Trains Leaving the Junction; and home prints, which were produced in especially large quantities.

Currier and Ives avoided controversial subjects, although there was at least one print showing the branding of slaves prior to embarkation from Africa. Prints of sporting events focused on prize fights (like the 1835 match between John C. Heeman and the English champion Tom Sayers), boat races, and even, in the early stages of its development, baseball.

As America expanded, so did the demand for Currier and Ives prints. Today they provide a vivid picture of daily life in nineteenth century America.

After Nathaniel Currier retired in 1880, his son Edward ran the firm with Ives. By 1907, both families were out of the business, which folded shortly thereafter. Although the lithographs never lost their appeal, and indeed gained in value after the firm closed, improvements in photography doomed lithography as the chief means of illustrating everyday life.

By the 1920s, there was an upsurge of public interest in artifacts of the American past, and the modern collecting of Currier & Ives prints began in earnest. Foremost among these collectors was Harry T. Peters, who assembled a personal holding of more than 2,800 Currier & Ives prints and, in 1929, published the firm's first history and catalog. In 1956, the Museum of the City of New York organized a major exhibition of his collection, which subsequently was donated to the museum. Peters' gift has encouraged other collectors to donate works by Currier & Ives, thus enhancing the museum's holdings of the prints.[4]

Today, original Currier and Ives prints are much sought by collectors, and modern reproductions of them are popular decorations. Especially popular are the winter scenes, which are commonly used on American Christmas cards.

At the Copley Fine Art Auction held in 2007 the Currier and Ives hand colored lithograph titled The Life of a Hunter, A Tight Fix sold for $40,250.[7]

Mitchell Parish's lyrics to Leroy Anderson's orchestra piece "Sleigh Ride" mention the company by name, stating that a merry indoor scene at a farm during the winter will "nearly be like a picture print by Currier and Ives."