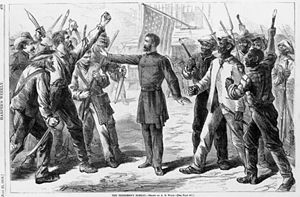 A Bureau agent stands between an armed group of Southern whites and a group of freed slaves in this 1868 image from the popular magazine Harpers' Weekly.

The Bureau of Refugees, Freedmen and Abandoned Lands, popularly known as the Freedmen's Bureau, was a federal agency that was formed during Reconstruction to aid distressed refugees of the American Civil War. It became primarily an agency to help the Freedmen (freed slaves) in the South, including issuing rations, clothing, and medicine. The Bureau also assumed custody of confiscated lands or property in the former Confederate States, border states, District of Columbia, and Indian Territory. The Bureau was established by Congress. It was part of the United States Department of War, and headed by Union General Oliver O. Howard. Fully operational from June 1865 through December 1868, it was disbanded by President Andrew Johnson.

The bureau was put into effect to protect the best interests of former slaves. Seventeen hundred dollars were spent to help establish 4,000 schools, 100 hospitals, and provide homes and food for past slaves. This bureau was also designed to help these former slaves find new jobs and improve their education and health. Howard University was also established in Washington, in 1867, with the help of the Freeman’s Bureau.

The Freedman’s Bureau was named after General Oliver Howard, who was a civil war hero. General Howard was also the commissioner of the Bureau of the Refugees. Nearly a year after the bureau was put into effect, the Radical Republicans, who put commissioned the bureau, attempted to increase its powers. President Andrew Johnson vetoed this request in February 1866.

In 1865, the Freedmen's Bureau's primary role was providing emergency food, housing, and medical aid to refugees. It could also help reunite missing family members. By late 1865, it focused its work on helping the Freedmen adjust to new conditions. The agency provided employment opportunities and supervised labor contracts. It soon became, in effect, a military court that handled legal issues. By 1866, it was providing a base for political mobilization; many officials became carpetbaggers and became involved in southern politics. Conservative whites resented the Bureau, which became a major issue in the election of 1866. The Radical Republicans won that election and blocked efforts of President Johnson to abolish the agency.

The majority of agents were northern whites. George T. Ruby, a northerner who served first with the Army in Louisiana and moved to Texas in 1866, was one of only a handful of African-American agents. His organizational experience and travels throughout Texas gave him the necessary skills to later become one of only two blacks to serve in the Texas legislature during Reconstruction. [1]

As one biographer commenting on Oliver Otis Howard said, "Howard's loose way of interpreting the law to fit his needs. He frequently was too ready to follow the spirit rather than the letter of the law."[2] Howard's loose interpretation of the legislation creating the Bureau allowed it to help blacks in many creative ways. For example, in spending five million dollars for schools between 1865 and 1871, he used money that was supposed to go for repairs toward construction of new school buildings, and money allocated for rent was used to pay teachers. The Bureau was attacked by former Confederate leaders for organizing Blacks against the ruling white classes of the South, including former slaveholders. Bureau agents sometimes falsely promised Blacks that the plantation lands of their former owners would be divided up and given to them if they voted Republican. At the state level, Bureau officials tried to be fair to both freedmen and employers. Although some of their subordinate agents were unscrupulous or incompetent, the majority of local Bureau agents were hindered in carrying out their duties by the opposition of former Confederates, the lack of a military presence to enforce their authority, and an excessive amount of paperwork.[3]

One of the more important—but rarely emphasized—motives of the Bureau was to help solve everyday problems of the refugees. They urgently needed clothing, food, medicine, communication with family members, and jobs. The Bureau gave out about 15 million rations of food to blacks. Also, the Bureau set up a system where planters could borrow rations in order to feed freedmen they employed. Though the Bureau set aside $350,000 for this service, only $35,000 was borrowed.

The Bureau attempted to strengthen existing medical care facilities as well as expand services into rural areas through newly established clinics. The Bureau succeeded in giving medical care to over one million people. Medical assistance and supplies as well as food were in short supply, and civil authorities often were reluctant to cooperate with the Bureau in aiding the former slaves. Despite the good intentions, efforts, and limited success of the Bureau, medical treatment of the freedmen was severely deficient.[4]

Freedmen's Bureau agents at first complained that freedwomen were not working as they should and were refusing to contract their labor. They attempted to make freedwomen work by insisting that their husbands sign contracts obligating the whole family to work on cotton farms, and by declaring that unemployed freedwomen should be treated as vagrants just as men were. The Bureau did allow some exceptions, such as certain married women with employed husbands and some "worthy" women who had been widowed or abandoned and had large families of small children and thus could not work. "Unworthy" women, meaning the unruly and, especially, prostitutes, were the ones usually subjected to punishment for vagrancy.[5] Under slavery, marriages were informal; slavery disrupted many families, as did wartime chaos. Many Freedmen attempted to find their spouses and children, and the Bureau agents helped. The Bureau had an informal regional communications system that allowed agents to send inquiries and provide answers. It sometimes provided transportation to reunite families. Freedmen and freedwomen turned to the Bureau for assistance in resolving issues of abandonment and divorce. 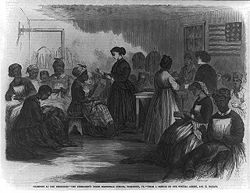 The most widely recognized among the achievements of the Freedmen’s Bureau are its accomplishments in the field of education. George Ruby, an African American, served as teacher and school administrator and as a traveling inspector for the bureau, observing local conditions, aiding in the establishment of black schools, and evaluating the performance of Bureau field officers. His efforts met with enthusiasm for education on the part of blacks and bitter opposition, including physical violence, from many planters and other whites.[6] Overall, the Bureau spent five million dollars to set up schools for blacks. By the end of 1865, more than 90,000 former slaves were enrolled as students in public schools. Attendance rates at the new schools for freedmen were between 79 and 82 percent. An important educator was Brigadier General Samuel Chapman Armstrong; as an agent of the Bureau he created and led Hampton Normal and Agricultural Institute.

By 1870, there were more than 1,000 schools for freedmen in the South. J. W. Alvord, an inspector for the bureau, wrote that the freedmen "have the natural thirst for knowledge," aspire to "power and influence … coupled with learning," and are excited by "the special study of books." Among the former slaves, both children and adults indulged in this new opportunity to learn. It helped African Americans find jobs and homes. About 150 schools were opened in Texas, and 4,300 schools in all were opened for African Americans. After the Bureau was abolished, its achievements collapsed under the weight of white violence against schools and teachers and the gutting of funds for all schools by Redeemer legislatures devoted to limited government.

The freedmen sought the Bureau's aid in establishing churches. After the war, control over existing churches was a highly contentious issue; Northern Methodists seized control of Southern Methodist buildings in some cities. Whereas whites and blacks had worshiped together before the war, now they mutually agreed to separate. The Bureau, with close ties to Northern Methodist and other churches, facilitated new buildings, though it did not spend any government money on churches. Northern mission societies collected funds for land, buildings, teachers' salaries, and basic necessities such as books and furniture.

Most of the assistant commissioners, realizing that blacks would not receive fair trials in the civil courts, tried to handle black cases in their own Bureau courts. Whites objected loudly and said this was unconstitutional. In Alabama, state and county judges were commissioned as Bureau agents. They were to try cases involving blacks with no distinctions on racial grounds. If a judge refused, martial law could be instituted in his district. All but three judges accepted their unwanted commissions, and the governor urged compliance.[7]

Perhaps the most difficult region was Louisiana's Caddo-Bossier district. It had not experienced wartime devastation or Union occupation. Understaffed and weakly supported by federal troops, well-meaning Bureau agents found their investigations blocked and authority undermined at every turn by recalcitrant planters. Murders of freedmen were common, and suspects in these cases generally went unprosecuted. Bureau agents did manage to negotiate labor contracts, build schools and hospitals, and provide the freedmen a sense of their own humanity through the agents' willingness to help.[8] The Ku Klux Klan and various other similar groups had been created by that time.