The cuneiform script (kjuːˈniːəfɔrm) is the earliest known form of written expression. As such, those writings that remain are communications from peoples long gone from the earth. Created by the Sumerians in approximately 3000 B.C.E., cuneiform writing began as a system of pictographs. Over time, the pictorial representations became simplified and more abstract. Cuneiforms were inscribed on clay tablets, on which symbols were drawn with a blunt reed for a stylus. The impressions left by the stylus were wedge shaped, thus giving rise to the name cuneiform ("wedge shaped").

The Sumerian script was adapted for the writing of the Akkadian, Elamite, Hittite (and Luwian), Hurrian (and Urartian) languages, and it inspired the Old Persian and Ugaritic national alphabets. Although it then disappeared when these cultures faded and new scripts, such as the Phoenician alphabet developed, numerous clay tablets, stelae (such as those upon which the Code of Hammurabi is written), and even the sides of cliffs (such as those containing the Behistun inscription) with cuneiform writings remained. Discovered by archaeologists and deciphered by the efforts of a series of linguists, cuneiform inscriptions provide valuable insights into cultures of the past.

The term cuneiform was coined in the seventeenth century, originally a French word that combined the Latin cuneus, which translates as "a wedge" with the French forme, to create cunéiforme, which literally translates as "wedge of unknown origin." This term reflected the early confusion of who had created the many ancient writings Europen travelers encountered.[1] Later, it was added to English as cuneiform.

The cuneiform writing system originated around 3000 B.C.E. in Sumer;[2] its latest surviving use is dated to 75 C.E.[3] The cuneiform script underwent considerable changes over a period of more than two millennia. The image below shows the development of the sign SAG "head."[4]

Stage 1 shows the pictogram as it was drawn around 3000 B.C.E. Stage 2 shows the rotated pictogram as written around 2800 B.C.E. Stage 3 shows the abstracted glyph in archaic monumental inscriptions, from ca. 2600 B.C.E., and stage 4 is the sign as written in clay, contemporary to stage 3. Stage 5 represents the late third millennium, and stage 6 represents Old Assyrian of the early second millennium, as adopted into Hittite. Stage 7 is the simplified sign as written by Assyrian scribes in the early first millennium, and until the script's extinction.[2]

Originally, pictograms were drawn on clay tablets in vertical columns with a pen made from a sharpened reed stylus, or incised in stone. This early style lacked the characteristic wedge-shape of the strokes.[5]

Certain signs to indicate names of gods, countries, cities, vessels, birds, trees, and so forth, are known as "determinants," and were the Sumerian signs of the terms in question, added as a guide for the reader. Proper names continued to be usually written in purely ideographic fashion.[6]

From about 2900 B.C.E., many pictographs began to lose their original function, and a given sign could have various meanings depending on context. The sign inventory was reduced from some 1,500 signs to some 600 signs, and writing became increasingly phonological. Determinative signs were re-introduced to avoid ambiguity.[6] 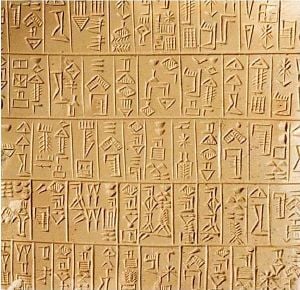 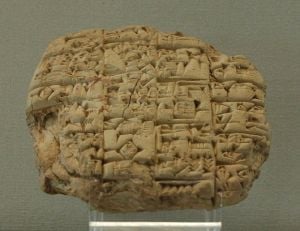 Letter sent by the high-priest Lu'enna to the king of Lagash (maybe Urukagina), informing him of his son's death in combat, c. 2400 B.C.E., found in Telloh (ancient Ngirsu).

In the mid-third millennium, the direction of writing was changed from columns running downwards and signs were written from left to right in horizontal rows (rotating all of the pictograms 90° counter-clockwise in the process). At the same time, a new wedge-tipped stylus was used which was pushed into the clay, producing wedge-shaped ("cuneiform") signs. These two developments made writing quicker and easier. By adjusting the relative position of the tablet to the stylus, the writer could use a single tool to make a variety of impressions.

Cuneiform tablets could be fired in kilns to provide a permanent record, or they could be recycled if permanence was not needed. Many of the clay tablets found by archaeologists were preserved because they were fired when attacking armies burned the building in which they were kept.

The script was also widely used on commemorative stelae and carved reliefs to record the achievements of the ruler in whose honor the monument had been erected.

The archaic cuneiform script was adopted by the Akkadians from c. 2500 B.C.E., and by 2000 B.C.E., had evolved into Old Assyrian cuneiform, with many modifications to Sumerian orthography. The Semitic equivalents for many signs became distorted or abbreviated to form new "phonetic" values, because the syllabic nature of the script as refined by the Sumerians was unintuitive to Semitic speakers.[7]

At this stage, the former pictograms were reduced to a high level of abstraction, and were composed of only five basic wedge shapes: horizontal, vertical, two diagonals, and the Winkelhaken impressed vertically by the tip of the stylus.[5] 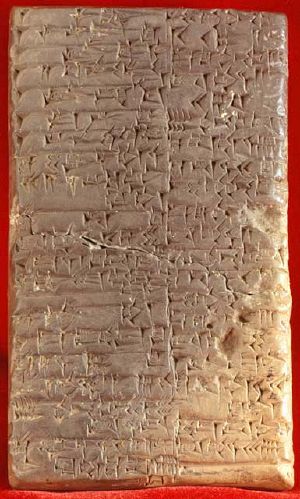 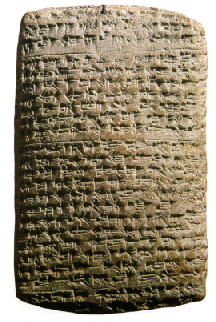 One of the Amarna letters, fourteenth century.

Neo-Assyrian ligature KAxGUR7 the KA sign was a Sumerian compound marker, and appears frequently in ligatures enclosing other signs. GUR7 is itself a ligature of SÍG.AḪ.ME.U, meaning "to pile up; grain-heap" (Akkadian kamāru; karû).

Typical signs usually have in the range of about five to ten wedges, while complex ligatures can consist of twenty or more (although it is not always clear if a ligature should be considered a single sign or two collated but still distinct signs); the ligature KAxGUR7 consists of 31 strokes.

Most later adaptations of Sumerian cuneiform preserved at least some aspects of the Sumerian script. Written Akkadian included phonetic symbols from the Sumerian syllabary, together with logograms that were read as whole words. Many signs in the script were polyvalent, having both a syllabic and logographic meaning.[7]

This "mixed" method of writing continued through the end of the Babylonian and Assyrian empires, although there were periods when "purism" was in fashion and there was a more marked tendency to spell out the words laboriously, in preference to using signs with a phonetic complement. Yet even in those days, the Babylonian syllabary remained a mixture of ideographic and phonetic writing.[6]

Hittite cuneiform is an adaptation of the Old Assyrian cuneiform of c. 1800 B.C.E. to the Hittite language. When the cuneiform script was adapted to writing Hittite, a layer of Akkadian logographic spellings was added to the script, with the result that we no longer know the pronunciations of many Hittite words conventionally written by logograms.

The complexity of the system prompted the development of a number of simplified versions of the script. Old Persian was written in a subset of simplified cuneiform characters known today as Old Persian cuneiform. It formed a semi-alphabetic syllabary, using far fewer wedge strokes than Assyrian used, together with a handful of logograms for frequently occurring words like "god" and "king." The Ugaritic language was written using the Ugaritic alphabet, a standard Semitic style alphabet (an abjad) written using the cuneiform method. 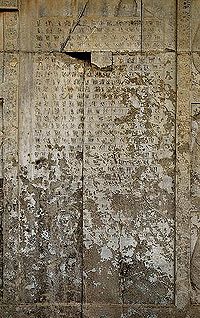 Early European travelers to Persepolis noticed carved cuneiform inscriptions and were intrigued. Carsten Niebuhr copied them in the eighteenth century, publishing them after his return to Europe in 1767. In 1802, Georg Friedrich Grotefend realized the introductory lines were likely to contain names and titles and began the process of decipherment. Yet, it was not until 1835, when Henry Rawlinson, a British East India Company army officer, visited the Behistun Inscriptions in Iran that a breakthrough in understanding was made. Carved in the reign of King Darius of Persia (522 B.C.E.–486 B.C.E.), they consisted of identical texts in the three official languages of the empire: Old Persian, Akkadian (language used in Babylon), and Elamite.[8] The Behistun inscription was to the decipherment of cuneiform what the Rosetta Stone was to the decipherment of Egyptian hieroglyphs. 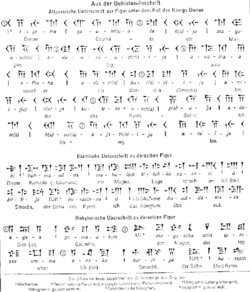 Transcription of a part of the Behistun inscription

Rawlinson correctly deduced that the Old Persian was a phonetic script and he successfully deciphered it. In two years, he completed a version of about half of the Persian text, forwarding to the Royal Asiatic Society a translation of the two first paragraphs of the Behistun inscription, recording the titles and genealogy of Darius.[8] After translating the Persian, Rawlinson and, working independently of him, the Anglo-Irish Egyptologist Edward Hincks, began to decipher the others. The actual techniques used to decipher the Akkadian language have never been fully published; Hincks described how he sought the proper names already legible in the deciphered Persian while Rawlinson never said anything at all, leading some to speculate that he was secretly copying Hincks.[9] They were greatly helped by Paul Émile Botta's discovery of the city of Nineveh in 1842. Among the treasures uncovered by Botta were the remains of the great library of Assurbanipal, a royal archive containing tens of thousands of baked clay tablets covered with cuneiform inscriptions.

By 1851, Hincks and Rawlinson could read 200 Babylonian signs. They were soon joined by two other decipherers: Young German-born scholar Julius Oppert, and versatile British Orientalist William Henry Fox Talbot. Hincks had come to a number of important conclusions regarding the nature of Assyro-Babylonian cuneiform. He believed that the script was essentially syllabic, comprising open syllables (such as "ab" or "ki") as well as more complex closed syllables (like "mur"). He also discovered that cuneiform characters were "polyphonic," by which he meant that a single sign could have several different readings depending on the context in which it occurred. In 1857, the four men met in London and took part in a famous experiment to test the accuracy of their method on an undeciphered cuneiform text. In all essential points the translations produced by the four scholars were found to be in close agreement. The "jury" declared itself satisfied, and the decipherment of cuneiform was adjudged a fait accompli.[10] 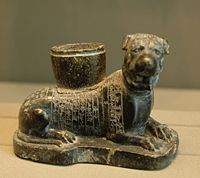 Votive dog statuette made of Steatite (soapstone) from the Sumerian city of Lagash, with cuneiform inscription.

Another important step in cuneiform studies was made at the site of Hattusa, the capital of the Hittite Empire in the late Bronze Age, excavated in the twentieth century beginning in 1906. One of the most important discoveries at the site was a collection of cuneiform royal archives, consisting of official correspondence and contracts, as well as legal codes, procedures for cult ceremony, oracular prophecies, and other items. One particularly important tablet details the terms of a peace settlement between the Hittites and the Egyptians under Ramesses II, c. 1283 B.C.E. The interpretation of the script, which proved to be a variation on Akkadian cuneiform, was aided by its partially ideographic nature, revealing elements of meaning that were independent of linguistic factors, as well as a series of bilingual texts.

In the early days of cuneiform decipherment, the reading of proper names presented the greatest difficulties. However, there is now a better understanding of the principles behind the formation and the pronunciation of the thousands of names found in historical records, business documents, votive inscriptions, and literary productions. The primary challenge was posed by the characteristic use of old Sumerian non-phonetic ideograms in other languages that had different pronunciations for the same symbols. Until the exact phonetic reading of many names was determined through parallel passages or explanatory lists, scholars remained in doubt, or had recourse to conjectural or provisional readings. Fortunately, in many cases, there are variant readings, the same name being written phonetically (in whole or in part) in one instance, and ideographically in another.