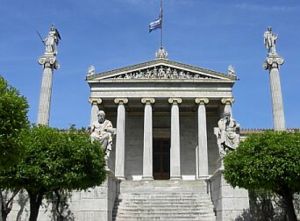 The National Academy in Athens, with Apollo and Athena on their columns, and Socrates and Plato seated in front represents the intellectual legacy of the Classic Age that continues to inform how humans understand life, truth and the universe.

Classical antiquity, era, or period is a broad term for a long period of cultural history centered on the Mediterranean Sea, which begins roughly with the earliest-recorded Greek poetry of Homer (eighth-seventh century B.C.E.), and continues through the rise of Christianity and the fall of the Western Roman Empire (fifth century C.E.), ending in the dissolution of classical culture with the close of Late Antiquity (300—600 AD), or the similar and better known periodization of history, the Early Middle Ages (500-1100 C.E.). Such a wide sampling of history and territory covers many rather disparate cultures and periods. "Classical antiquity" typically refers to an idealized vision of later people, of what was, in Edgar Allan Poe's words, "the glory that was Greece, the grandeur that was Rome!"

The foundations of the modern world derive from the Classic Age as it was reformulated during the Renaissance followed by the Enlightenment, which subsequently emerged within what is usually described as liberal humanism. For some, God's rightful place as the author of values and as the director of history has been usurped as a result of confidence in human ingenuity inspired by the great minds of the Classic Age. Positively, however, the contemporary universal outlook, respect for the dignity of all people on which democracy is based—inspired by Athenian democracy in the Classic Age—thirst for knowledge and for ways of bettering the human lot can all be traced back to the enduring influence of the Classical legacy.[1][2] The relevance of the classical to the contemporary suggests that there is a great deal of continuity in human experience and that values that served humanity well in the past retain meaning in the present.

Ancient Greece is the period in Greek history lasting for close to a millennium, until the rise of Christianity. It is considered by most historians to be the foundational culture of Western civilization. Greek culture was a powerful influence in the Roman Empire, which carried a version of it to many parts of Europe.

The civilization of the ancient Greeks has been immensely influential on the language, politics, educational systems, philosophy, science, art and architecture of the modern world, fueling the Renaissance in Western Europe and again resurgent during various neo-classical revivals in eighteenth– and nineteenth–century Europe and The Americas.

"Ancient Greece" is the term used to describe the Greek-speaking world in ancient times. It refers not only to the geographical peninsula of modern Greece, but also to areas of Hellenic culture that were settled in ancient times by Greeks: Cyprus and the Aegean islands, the Aegean coast of Anatolia (then known as Ionia), Sicily and southern Italy (known as Magna Graecia), and the scattered Greek settlements on the coasts of Colchis, Illyria, Thrace, Egypt, Cyrenaica, southern Gaul, east and northeast of the Iberian peninsula, Iberia and Taurica.

The Hellenistic period of Greek history was the period between the death of Alexander the Great in 323 B.C.E. and the annexation of the Greek peninsula and islands by Rome in 146 B.C.E. Although the establishment of Roman rule did not break the continuity of Hellenistic society and culture, which remained essentially unchanged until the advent of Christianity, it did mark the end of Greek political independence

The Roman Forum was the central area around which ancient Rome developed.

Ancient Rome was a civilization that grew out of the city-state of Rome, founded in the Italian Peninsula circa the ninth century B.C.E.. During its 12-century existence, the Roman civilization shifted from a monarchy to an oligarchic republic to a vast empire. It came to dominate Western Europe and the entire area surrounding the Mediterranean Sea through conquest and assimilation. However, a number of factors led to the eventual decline of the Roman Empire. The western half of the empire, including Hispania, Gaul, and Italy, eventually broke into independent kingdoms in the fifth century; the eastern empire, governed from Constantinople, is referred to as the Byzantine Empire after AD 476, the traditional date for the "fall of Rome" and subsequent onset of the Middle Ages.

Roman civilization is often grouped into "classical antiquity" with ancient Greece, a civilization that inspired much of the culture of ancient Rome. Ancient Rome contributed greatly to the development of law, war, art, literature, architecture, and language in the Western world, and its history continues to have a major influence on the world today. Ancient Rome was republican and even when an imperial system developed the institutions of the republic were preserved. The "city state" or "polis" which had been the main political organization among the Greeks then yielded to empire with strong central authority, which tended to be more authoritarian. Religion, too, was given more prominence in terms of official patronage and a demand for conformity. The Greeks had taken religion seriously—indeed Socrates was tried for corrupting the youth with his ambivalent attitude towards the Gods—but they never took their religion too seriously because they knew that their myths were painted human emotions and human conflicts onto a divine canvas. Thus, Euripides could satirize the deities without censure. At its deepest core, Greek civilization was profoundly humanist, valuing free enquiry into the cause of events, the meaning and purpose of life, with humanity at the center of the moral universe.[3]

Looking back on the classical

The Renaissance discovery of Classical Antiquity (1969) is a book by Roberto Weiss on how the Renaissance was partly caused by the rediscovery of classic antiquity. This included a confidence in human ability to decipher the mysteries of the universe, as well as a revival of classical art and medicine and science which itself resulted in the Enlightenment. The Art of the Renaissance, like that of the ancient world, celebrated the human form and threw off some of the constraints that Christianity had placed on art, regarding nudity as immoral. The Enlightenment valued, as did the Greeks, reason very highly, which also tended to clash with the church’s insistence on the higher authority of Revelation.

The term "Classical antiquity" can be understood as how ancient Greek and Roman culture is viewed by their admirers from the more recent past. It remains a vision that many people in the twenty-first century continue to find compelling.

In the eighteenth and nineteenth centuries reverence for classical antiquity was much greater in Western Europe and the United States than it is today. Respect for the ancients of Greece and Rome affected politics, philosophy, sculpture, literature, theatre, education, and even architecture and sexuality. The study of classics at leading Universities was considered an elite subject. Classics in the academy today is a less prestigious subject, while classicism generally is less influential. However, the philosophy of Socrates, Plato and of others and the literary works of Homer and Virgil, the Histories of Herodotus continue to be respected, studied and analyzed and few students of philosophy or of literature would ignore the value of the legacy of the ancients to their discipline.

In politics, the presence of a Roman Emperor was felt to be desirable long after the empire fell. This tendency reached its peak when Charlemagne was crowned "Roman Emperor" in the year 800, an act which led to the formation of the Holy Roman Empire. The notion that an emperor is a monarch who outranks a mere king dates from this period. In this political ideal, there would always be a Roman Empire, a state whose jurisdiction extended to the entire civilized western world. However, Athenian democracy would provide the model for the emergence of constitutional, parliamentary government (although in Athens citizens represented themselves in the Assembly, while parliamentary government is representative—citizens elect delegates as their representatives in the legislature.)

Epic poetry in Latin continued to be written and circulated well into the nineteenth century. John Milton and even Arthur Rimbaud got their first poetic education in Latin. Genres like epic poetry, pastoral verse, and the endless use of characters and themes from Greek mythology left a deep mark on Western literature.

In architecture, there have been several Greek Revivals, which seem more inspired in retrospect by Roman architecture than Greek. Still, one needs only to look at Washington, DC to see a city filled with large marble buildings with façades made out to look like Roman temples, with columns constructed in the classical orders of architecture.

In philosophy, the efforts of St Thomas Aquinas were derived largely from the thought of Aristotle, despite the intervening change in religion from paganism to Christianity. Greek and Roman authorities such as Hippocrates and Galen formed the foundation of the practice of medicine even longer than Greek thought prevailed in philosophy. In the French theatre, tragedians such as Molière and Racine wrote plays on mythological or classical historical subjects and subjected them to the strict rules of the classical unities derived from Aristotle's Poetics. The desire to dance like a latter-day vision of how the ancient Greeks did it moved Isadora Duncan to create her brand of ballet.