Cave lion, also known as European cave lion and Eurasian cave lion, is the common name for a extinct, large, wild felid, Panthera leo spelaea (or P. spelaea), which lived from about 370,000 to 10,000 years ago. Known from fossils and multiple examples of prehistoric art, the cave ion is characterized by large size (larger than the modern lion), rounded, protruding ears, tufted tail, and perhaps faint, tiger-like stripes. While commonly considered an extinct subspecies of the lion (Panthera leo), the cave lion is considered by some as a separate species.

Inhabiting Europe until about the time of the last European Ice Age, the cave lion lived at the same time as Neanderthals (250,000 years ago until 30,000 years ago) and Cro-Magnon man (40,000 to 10,000 years ago) and have been depicted in cave paintings, among other art. The common name comes from their graphic appearance in caves, although they probably did not live in them.

During its time, the cave lion was one of the key members of the Pleistocene fauna in Eurasia, during which time it was widespread. For human beings, various archaeological artifacts suggest that they were featured in Paleolithic religious rituals. Also, they were hunted by human beings. 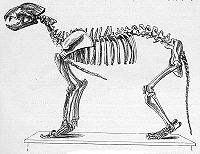 The cave lion is a member of the Panthera genus, which includes four large cats among its extant members: The lion (Panthera leo), the tiger (Panthera tigris), the jaguar (Panthera onca), and the leopard (Panthera pardus).

The cave lion generally is placed as a subspecies of the lion, as Panthera leo spelaea. However, some authorities—such as Sotnikova and Nikolskiy (2006), Harington (1969) and Vereshchagin (1971)—consider the cave lion as a separate species, Panthera spelaea (Goldfuss). Sotnikova and Nikolskiy (2006) base their finding on the cave lion being a separate species on an analysis of skull characters and note many advanced characters relative to P. leo that support separate evolution. They maintain that recent molecular data also provides additional proof that the cave lion was highly distinct from its living relatives. They also assign the fossil lion of northwestern North American, Panthera atrox, as part of Panthera spealea.

Some authorities, based on a comparison of skull shapes, consider the cave lion to be more closely related to the tiger, which would result in the formal name Panthera tigris spelaea (Groiss 1996). However, recent genetic research suggests that the cave lion was a close, but separate, relative of the modern lion and leopard (Burger 2004; Christiansen 2008). Sotnikova and Nikoskiy (2006) likewise did not find any synapomorphies in the cranial structure to support a close relationship of cave lions with tigers in the genus Panterha.

The cave lion is one of the largest known members of the Panthera genus. The remains of an adult male, which was found in 1985 near Siegsdorf in Germany, had a shoulder height of around 1.2 meters (4 feet) and a body length of 2.1 meters (7 feet) without the tail. This is similar to the size of a very large modern lion. The size of this male has been exceeded by other specimens of cave lions, which may have had an overall head/body length of 3.5 meters and males may have weighed in at 400 kilograms (882 pounds) (WMM 2004). This cat may have been approximately 5 to 33 percent larger than modern lions, and maybe even larger than the largest extant cat, the Siberian tiger, Panthera tigris altaica, although it was smaller than the earlier eurasian panterines, Panthera fossilis, and the larger American lion, Panthera atrox (Lessem and Sovak 1999; Koenigswald 2002).

Because of not only fossils, but also depictions of the cave lion in prehistoric cave paintings and Paleolithic clay figurines and ivory carvings, we are able to gain some understanding of what these animals looked like and their behavior. These representations indicate that cave lions had rounded, protruding ears, tufted tails, possibly faint tiger-like stripes, and that at least some had a "ruff" or primitive mane around their neck, indicating males. Their body color possibly varied from a ochre-tinted gray to dark ochre brown on the upper parts of the body, while the rest of the coat was light brown. 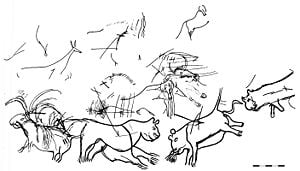 The cave lion received its common name from the fact that large quantities of its remains are found in caves (Arduini and Teruzzi 1993), but it is doubtful whether they lived in them. It had a wide habitat tolerance, but probably preferred conifer forests and grasslands (Hublin 1984), where medium-sized to large herbivores occurred. Fossil footprints of lions, which were found together with those of reindeer, demonstrate that these cats once occurred even in subpolar climates.

These active carnivores (Arduini and Teruzzi 1993) probably preyed upon the large, herbivorous animals of their time, including horses, deer, boars, and bison. Some paintings of them in caves show several hunting together, which suggests the hunting strategy of contemporary lionesses.

Small prey likely were brought down usually with a blow of the front paw and then held down with both front feet. The animals would finally be killed by a powerful bite of the sharp teeth (Lessem and Sovak 1999), at the back of the neck, in the region of the throat and even in the chest. A cave lion usually could not run as fast as its prey, but could pounce on it from behind or run up next to it and bring it down with the paws. In this manner, a running animal's balance could very easily be disturbed.

The cave lion appeared after the earlier species Panthera leo fossilis, which first appeared in Europe about 700,000 years ago, but generally is poorly represented in the European records and so far unknown in Asia (Sotnikova and Nikolskiy 2006). The cave lion itself lived from 370,000 to 10,000 years ago, during the Pleistocene epoch. Apparently, it became extinct about 10,000 years ago (Hublin 1984, Lessem and Sovak 1999), during the Würm glaciation, although there are some indications it may have existed into historic times in southeastern Europe, as recently as 2,000 years ago in the Balkans (Guggisberg 1975).

The cave lions extinction appears linked to the Quaternary extinction event, which wiped out most of the megafauna prey in those regions. Cave paintings and remains found in the refuse piles of ancient camp sites indicate that they were hunted by early humans, which also may have contributed to their demise (WMM 2004)..

Retrieved from https://www.newworldencyclopedia.org/p/index.php?title=Cave_Lion&oldid=1030135
Categories:
Hidden category:
This page was last edited on 3 January 2020, at 00:12.
Content is available under Creative Commons Attribution/Share-Alike License; additional terms may apply. See Terms of Use for details.