Bourges Cathedral (Cathédrale Saint-Étienne de Bourges) is a cathedral, dedicated to Saint Stephen, located in Bourges, France. It is the seat of the Archbishop of Bourges.

It is based on the Notre-Dame in Paris but with significant differences in design. The cathedral is noted for its unique feats of architecture, impressive sculptures and thirteenth-century stained glass windows.

The Gothic Cathedral was perhaps the highest achievement of the period and at Bourges the stained-glass windows are outstanding examples of how an art form was used to illustrate the Bible for people who could not read, as well as to light up formerly dim interiors.

Bourges Cathedral was designated a World Heritage Site by UNESCO in 1992.

Located in central France along the Yèvre River, Bourges is the capital of the French department of Cher. Originally founded by Bituriges, the powerful Gallic tribe living there when the Romans invaded more than 2000 years ago. The Romans, impressed by the wealth of this settlement, decided that instead of sacking it they would stay and live there. They renamed the place Avaricum and built bathhouses and a defensive wall.

As ancient Avaricum it was defended valiantly in 52 B.C.E. by Vercingetorix against Julius Caesar, who in his commentaries deemed it one of the most beautiful cities in Gaul.

During the Hundred Years War, Charles VII resided there (1422–37), and Joan of Arc wintered there (1429–1430). In 1438 the Pragmatic Sanction was signed at Bourges. Louis XI, who was born there, endowed the city in 1463 with a university (abolished during the French Revolution) at which Jacques Cujas (1522–1590) was once a renowned teacher of Roman law. John Calvin was converted to Martin Luther’s ideas in Bourges.

The cathedral has been a site of Christian worship since the third century, when the Roman city of Avaricum sheltered the first Christian community in Gaul. Successive monumental crypts were built here in the 3rd, 4th and 9th centuries.

The first Cathedral of Bourges was a Romanesque edifice, built in the eleventh century by Archbishop Gozlin, the brother of Robert II of France. A century later, this was determined to be too small; rebuilding in the brand-new Gothic style began in 1195. Funding was provided in large part by a donation from Henri de Sully, Bishop of Bourges (and brother of the Bishop of Paris).

Construction began in 1195, the same time as Chartres Cathedral. The lower church was built about 1200, followed by the choir above it in 1214. Glazing of the windows in the ambulatory was underway between about 1215 and 1225. The nave was finished by about 1230, then work slowed down considerably. The architect was Paul-Louis Boeswillwald and the master builder was Philip Berruyer.

The west facade was constructed throughout the latter half of the thirteenth century. In 1313, great cracks began to appear in the southern tower, which had to be supported by extensive buttressing. Structural problems made it impossible to mount bells so it came to be called a "deaf tower."

The new Cathedral of Bourges was finally dedicated on May 13, 1324, but the north tower was still incomplete. This was finished by the end of the fifteenth century, but then came crashing down in 1505. The north tower was rebuilt in 1542 in a Gothic style harmonious with the much older facade, although some Renaissance elements crept in. It is known as the Tour de Beurre (Butter Tower), since it was funded by offering donors an exemption from fasting during Lent.[1]

The cathedral was added to the list of the World Heritage Sites by UNESCO in 1992.

The cathedral's nave is 15m wide by 37m high; its arcade is 20m high; the inner aisle is 21.3m and the outer aisle is 9.3m high. The use of flying buttresses was employed to help the structure of the building. However, since this was a fairly new technique, one can easily see the walls were still made quite thick to take the force. Sexpartite vaults are used to span the nave.

Bourges Cathedral has a highly unique floor plan. It has no transepts, which form the cross-shape of most churches. This lends the cathedral a unique appearance inside and out. On the exterior, thick walls and a myriad of flying buttresses support the unbroken weight of the long nave (122m/400 ft).[1]

Bourges is also notable for the unity of its design, seen in no other cathedral of the High Gothic era. It features two distinct horseshoe aisles that wrap around a central nave and choir). The inner aisle has a higher vault than the outer aisle.[2] Each ambulatory/aisle has its own portal at the west end. The five portal entrance necessitated more careful design to create a more coherent façade. This also eliminated the usual cross-shaped transept design.[3] The gallery is absent; instead the inner aisle has been raised. This gives the cathedral a pyramidal shape under the buttresses. The flying buttresses are very structurally efficient (particularly compared to those at Chartres, which is a contemporary structure) as the steep angle channels the thrust from the nave vaults and from wind loading more directly to the outer buttress piers. 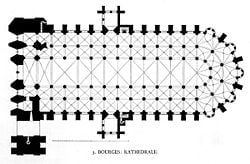 Floorplan of the cathedral

The Great Tower is a copy of one found at the Louvre and symbolizes royal power. The statues on the façade smile at the tympanum of the Last Judgment, welcoming the Judgment of Christ. The Romanesque carved portals from about 1160-70, probably intended for the facade of the earlier cathedral, have been reused on the south and north doors. The profuse ornamentation is reminiscent of Burgundian work. 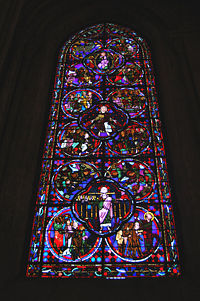 An example of the stained glass at Bourges Cathedral

Bourges Cathedral retains almost all its original ambulatory glass (apart from the axial chapel), dating from about 1215. The iconography used in many of these windows uses typology (such as Old Testament episodes prefiguring events in the life of Christ) and symbolism (such as the pelican who pecks her breast to feed her young on her own blood and the lioness who licks the malformed cub into shape) to communicate theological messages. Other windows show the parables of the Good Samaritan and the Prodigal Son, the story of Dives and Lazarus, and the Apocalypse.

Of the original 25 windows, 22 survive. The three windows in the central east chapel were lost. The large windows in the main wall of the ambulatory are entirely original. Unfortunately the narrower windows in the chapels have lost their original lower registers, due to Baroque altar installation in the seventeenth century. These panels were replaced in the nineteenth century with medieval-style stained glass of high quality, but without reference to the lost originals.[1]

The discovery of emblematic murals (in the sacristy of the Chapter House decorated by Jacques Coeur in honor of Charles VII around 1450) was followed by another more enigmatic one: the frescoes of the Crucifixion on a seascape background and of the resurrection of Christ in the Chapel of Du Breuil, which date from about 1475.

The astronomical clock and clockface representing the signs of the Zodiac, painted by Jean d'Orleans, have been restored. The original mechanism, which is the work of Canon Jean Fusoris (1424), is well-preserved.[4]

Retrieved from https://www.newworldencyclopedia.org/p/index.php?title=Bourges_Cathedral&oldid=1064638
Categories:
Hidden category:
This page was last edited on 9 February 2022, at 15:10.
Content is available under Creative Commons Attribution/Share-Alike License; additional terms may apply. See Terms of Use for details.