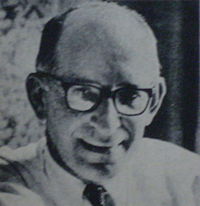 Bernard Malamud (April 26, 1914 – March 18, 1986) was an American writer, allegorist, and a well-known Jewish-American author. He has received international acclaim for his novels and short stories. His stories prominently reflect important themes from the spiritual tradition of Judaism. Malamud's stories are uplifting without being naive about the challenges of modern, urban life. They demonstrate characters confronting those challenges by relying on the values, such as love and forgiveness which derive from the Judeo-Christian tradition.

Bernard Malamud was born April 26, 1914, in Brooklyn, New York to Russian Jewish immigrants, Max and Bertha (Fidelman) Malamud. His brother, Eugene, was born in 1917. Bernard attended high school in Brooklyn and during those years he often visited the movie houses and after would describe the plots to his schoolhood friends. He was especially fond of Charlie Chaplin's comedies. From 1928 to 1932 he attended Erasmus Hall High School in Brooklyn, receiving his Bachelor's degree from City College of New York in 1936. He worked for a year at $4.50 a day as a teacher-in-training, before attending college on a government loan. Malamud later earned his Master's degree from Columbia University in 1942. Malamud aspired to teach English, however, the scarcity of work in pre-World War II New York led him to find work in Washington, D.C., with the Bureau of the Census. In 1949 he began teaching at Oregon State University, an experience that he would later fictionalize in his novel A New Life (1961). He left this post in 1961 to teach creative writing at Bennington College in Vermont.

Ann Malamud, a 1939 Cornell University graduate, typed 100 application letters for a college teaching job for her husband. She also typed and reviewed his manuscripts.

Janna Malamud Smith relates her memories of her father in her memoir, My Father is a Book.

Malamud began actively writing short stories in 1941 and in 1943 he published his first stories, "Benefit Performance" in Threshold and "The Place Is Different Now" in American Preface.

In 1948, at the age of 34, he had completed his first novel but he eventually burned it. In the early 1950s, many stories began appearing in Harper's Bazaar, Partisan Review, and Commentary.

The Natural, Malamud's first novel, was published in 1952. The novel is one of his best remembered and most symbolic works. The story traces the life of Roy Hobbs, an unknown middle-aged baseball player who reaches legendary status with his stellar talent. Malamud’s fiction touches lightly upon mythic elements and explores themes as initiation and isolation. The Natural also focuses upon a recurring writing technique that marked much of Malumud’s works.

Malamud’s second novel, The Assistant (1957), set in New York and drawing on Malamud's own childhood, is an account of the life of Morris Bober, a Jewish immigrant who owns a grocery store in Brooklyn. Although he is struggling financially, Bober takes in a drifter of dubious character.

Most of the short stories in Malamud’s first collection, The Magic Barrel (1958), depict the search for hope and meaning within the bleak enclosures of poor urban settings. The title story focuses on the unlikely relationship of Leo Finkle, an unmarried rabbinical student, and Pinye Salzman, a colorful marriage broker. Finkle has spent most of his life with his nose buried in books and thus isn’t well-educated in life itself. However, Finkle has a greater interest—the art of romance. He engages the services of Salzman, who shows Finkle a number of potential brides from his “magic barrel” but with each picture Finkle grows more disinterested. After Salzman convinces him to meet Lily Hirschorn, Finkle realizes his life is truly empty and lacking the passion to love God or humanity. When Finkle discovers a picture of Salzman’s daughter and sees her suffering, he sets out on a new mission to save her. Other well-known stories included in the collection are: The Last Mohican, Angel Levine, Idiots First, and The Mourners, a story which focuses on Kessler, the defiant old man in need of 'social security' and Gruber, the belligerent landlord who doesn't want Kessler in the tenement anymore.

He is most renowned for his short stories, oblique allegories often set in a dreamlike urban ghetto of immigrant Jews. His prose, like his settings, is an artful pastiche of Yiddish-English locutions, punctuated by sudden lyricism. On Malamud's death, Philip Roth wrote: "A man of stern morality, [Malamud was driven by] a need to consider long and seriously every last demand of an overtaxed, overtaxing conscience torturously exacerbated by the pathos of human need unabated."

The Fixer, won the National Book Award in 1966 and the Pulitzer Prize for Fiction. Malamud's novel The Natural was made into a movie starring Robert Redford (described by the film writer David Thomson as "poor baseball and worse Malamud"). Among his other novels were Dubin's Lives, a powerful evocation of middle age which uses biography to recreate the narrative richness of its protagonists' lives, and The Tenants, an arguably meta-narrative on Malamud's own writing and creative struggles, which, set in New York, deals with racial issues and the emergence of black/African American literature in the American 1970s landscape. Malamud taught at Oregon State University from 1949-1961.

Writing in the last third of the twentieth century, Malamud was aware of the social problems that are prevalent in modern urban society: rootlessness, infidelity, abuse, divorce, and more, but he believes in love as redemptive and sacrifice as uplifting. Often, success depends on cooperation between antagonists. In The Mourners, for example, landlord and tenant learn from each other's anguish. In The Magic Barrel, the matchmaker worries about his "fallen" daughter, while the daughter and the rabbinic student are drawn together by their need for love and salvation.

If Malamud's readers are sometimes disappointed by ambiguous or unhappy endings, they are often reassured about the existence of decency in a corrupt world. Malamud's guarded optimism reflects several influences. He cites American authors, Nathaniel Hawthorne and Henry James, as guides to moral and spiritual struggles. Like them, Malamud holds individuals responsible for their behavior. He also admires Russian writers, Fyodor Dostoevsky and Anton Chekhov, for their vibrant portrayal of the self versus society. Although he does not mention other Jewish writers as influences, he concedes "a common fund of Jewish experience and possibly an interest in the ethical approach."

"Where there's no fight for it there's no freedom. What is it Spinoza says? If the state acts in ways that are abhorrent to human nature it's the lesser evil to destroy it."

"All men are Jews, though few men know it."

"Without heroes we would all be plain people and wouldn't know how far we can go."

"Life is a tragedy full of joy."

"I write...to explain life to myself and to keep me related to men."

His 1952 baseball novel The Natural was adapted into a film starring Robert Redford.

PEN/Malamud Award: Given annually since 1988 in honor of the late Bernard Malamud, The PEN/Malamud Award recognizes excellence in the art of the short story. The basis of the award fund was a $10,000 bequest from Mr. Malamud to the PEN American Center; the fund continues to grow through the generosity of many members of PEN and other friends, and with the proceeds from the annual readings.

Retrieved from https://www.newworldencyclopedia.org/p/index.php?title=Bernard_Malamud&oldid=1063308
Categories:
Hidden category:
This page was last edited on 21 January 2022, at 00:02.
Content is available under Creative Commons Attribution/Share-Alike License; additional terms may apply. See Terms of Use for details.