Map of the Belgian colonial empire around 1920.

The Belgian colonial empire consisted of three African colonies possessed by Belgium between 1901 to 1962. This empire was unlike those of the major European imperial powers, since 98 percent of it was just one colony (about 76 times larger than Belgium)—the Belgian Congo—and that had originated as the private property of the country's king, King Leopold II, rather than being gained through the political action of the Belgian state. It was, however, the third largest colonial territory in Africa; in contrast, the possessions of Belgium's more powerful neighbor, Germany, came sixth in size.

Leopold II became known as the "Butcher of the Congo," where millions of Africans died as a result of the brutality of his rule. Conditions in the colonies did improve after the Belgian government assumed direct control after 1908. However, when independence came, the territories were ill-prepared for self-governance since little effort had been made to train and equip an African leadership. Belgians, including their government, adopted an ambivalent, even indifferent attitude towards their empire. Political instability created by tension between clan and central leadership in what is now the Democratic Republic of Congo, and tribal rivalry leading to genocide in Rwanda are at least in part the result of a colonial legacy that took far more from Africa than it gave. Autocratic rule did not need to find ways of negotiating how different factions could cooperate within a sustainable, participatory system of governance or access a fair share of resources.

Belgium itself had only been independent since 1830, prior to that it was part of the Netherlands (and had a role in that country's colonies) or of France, or was governed by Spain or Austria. By the time independent Belgium might have been in a position to consider an overseas empire, major imperial powers such as the United Kingdom and France already had the most economically promising territories for colonization within their spheres of influence. Leopold II tried to interest his government in establishing colonies, but it lacked the resources to develop the candidate territories and turned down his plans. As early as 1860, he was urging his state to imitate its neighbors in acquiring overseas territory, "extend beyond the sea whenever an opportunity is offered," he said, "you will find there precious outlets for your products, food for your commerce … and a still better position in the great European family."[1] In 1876, he told delegates at an international conference on geography which he sponsored in Brussels that:

To open to civilization the only part of our globe which it has not yet penetrated, to pierce the darkness which hangs over entire peoples, is, I dare say, a crusade worthy of this century of progress.[1]

Much of the initial infrastructure was the work of Stanley Morton Stanley who, having extensively explored the Congo, was employed by Leopold from 1878. Stanley "built roads along the entire stretch of the Congo" and set up "a chain of trading stations." He was, in fact, so successful in making the Congo profitable that at the Berlin Conference of 1884-85 the French struck a secret deal with Leopold that they would only support his territorial claim if he agreed "never again to employ Stanley in Africa."[2]

Leopold II exploited the Congo for its natural rubber, which was starting to become a valuable commodity. His regime in the Congo operated as a forced labor colony, with murder and mutilation as punishment for villagers who did not collect and supply the rubber quota they were given. It is estimated that millions of Congolese died during this time. Yet, Leopold personally subscribed to what was sometimes called the "progressive" view of imperialism: That it had a moral justification as a civilizing mission. He described his view of the colonial enterprise in these words:

Our only program, I am anxious to repeat, is the work of moral and material regeneration, and we must do this among a population whose degeneration in its inherited conditions it is difficult to measure. The many horrors and atrocities which disgrace humanity give way little by little before our intervention.[3]

Although the Congo Free State was not officially a Belgian colony, Belgium was its chief beneficiary, in terms of its trade, the employment of its citizens, and the wealth which Leopold extracted which was used for the construction of numerous fine public buildings in Brussels, Ostend, and Antwerp. This led to him being remembered in Belgium today as the "Builder-King." Through the Royal Trust he left most of his property to the nation. Joseph Conrad's book, Heart of Darkness (1899), was based on an 1890 visit to the Congo.[4] 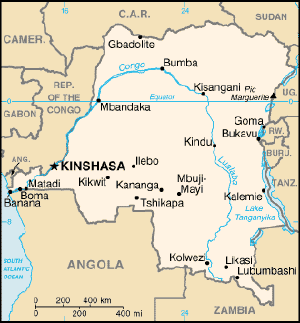 The former Belgian Congo in relation to its contemporary political neighbors (from the CIA World Factbook).

The Belgians were always somewhat indifferent towards their colonies, which were not regarded as a vital aspect of their national identity or place in the world, despite the value that Leopold had attached to them. After the Government assumed direct control, the treatment of the people did improve but only marginally. No democratic institutions were established. Very little money was invested in education—which was left to missionaries, mainly Roman Catholic, and consisted of basic literacy and numeracy. Christian missionaries were very successful in the Congo, where the Catholic Church is one of the largest in Africa (approximately 30 million members, or 55 percent of the population). Protestant missionaries were also active and Protestants today comprise 29 percent with an additional 10 percent belonging to the Kimbanguists (an African Independent Church banned in colonial times). What has been described as an Apartheid-like system also existed in that the mobility of Africans, but not of Europeans, was restricted and curfews applied to the former. A governor general exercised more or less absolute power. Towards the end of colonial rule, the governor general at the time, Léon Antoine Marie Petillon (in office 1952-1958), wanted to grant Africans more civil rights. However, the Government was not in favor, arguing that this could result in political instability. By the mid-1950s, an independence movement was underway. Some argued for a gradual shift to self-governance because of the lack of personnel equipped to take over the responsibilities of governance. Others cited Belgian's ratification of Article 73 of the United Nations Charter (on self-determination) and argued for a swifter hand-over of power than the 30 years favored by some. Supporters of the second option led by Patrice Lumumba (1925-1961) won the day and the Belgian Congo became independent on June 30, 1960. Lumumba was assassinated within a few months of becoming Prime Minister.

Along with several other European powers and the United States, as a result of the Boxer Rebellion, Belgium also gained a Concession of two square kilometers in Tientsin (or Tianjin; a Chinese Treaty port). This was essentially a trading post rather than a colony, and reverted to China in 1930.

During the East African Campaign of World War I, the north-east part of German East Africa, Ruanda-Urundi, was invaded by Belgian and Congolese troops in 1916, and was still occupied by them at the end of the war in 1918. As part of the Treaty of Versailles, the major part of German East Africa was handed over to British control but Ruanda-Urundi, twice the size of Belgium but only about 2 percent of the size of the Congo, was confirmed as a Belgian colony by a League of Nations Mandate in 1924, later renewed as a United Nations Trust Territory. The territory was granted independence in 1962, as the separate countries of Rwanda and Burundi in 1962, bringing the Belgian colonial empire to an end.

Following the independence of both colonies, Belgium kept strong but eventful political and economical relationships with the three succeeding African republics, which still refer to the "special relationship" whenever that seems to suit: Zaire (now Democratic Republic of the Congo), Rwanda, and Burundi.

The former Belgian colonies have experienced a series of coups, civil wars and have a history of political instability. The former colonial power cannot be solely blamed for all the atrocities and political instability that has characterized life in its now defunct empire, but a significant degree of responsibility is attributable. Arguably, in comparison with other colonial powers in Africa, Belgium did less to prepare its overseas subjects for political independence, investing little in education and training, and extracted the riches of its colonies at enormous human cost.

Retrieved from https://www.newworldencyclopedia.org/p/index.php?title=Belgian_colonial_empire&oldid=1023550
Categories:
Hidden category:
This page was last edited on 26 August 2019, at 16:00.
Content is available under Creative Commons Attribution/Share-Alike License; additional terms may apply. See Terms of Use for details.