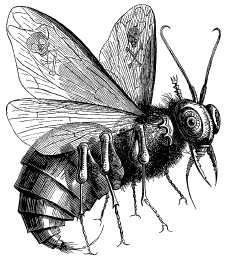 Beelzebub, also Ba‘al Zebûb or Ba‘al Zəvûv (Hebrew בעל זבוב, with numerous variants—in addition to Beelzebub, Ba‘al Zebûb, and Ba‘al Zəvûv, (בעל זבוב), there are several variants such as Belzebud, Beezelbub, Beezlebub, Beazlebub, Belzaboul, Beelzeboul, Baalsebul, Baalzebubg, Belzebuth Beelzebuth, and Beelzebus) was reportedly the name of a deity worshiped in the Philistine city of Ekron. Little is known about this god and his worship, and the name itself appears to be a Hebrew variation designed to denigrate the deity as the "Lord of the Flies." Originally, it may have referred to a "Lord of the High Place (Zebul)" or possibly the god of a place called Zebub. The term appears in Christian texts as the name of a demon or devil, often interchanged with Beelzebul.

In the Old Testament, the Israelite king Ahaziah inquired of Ba‘al Zebûb, the god of Ekron, seeking a prognosis for his recovery from a serious fall. The prophet Elijah condemned him for this, and he soon died. In the New Testament, Jesus was alleged by his opponents to be an agent of Beelzebub, the "prince of demons." In medieval times, Beelzebub was seen as one of the chief demons of Hell, sometimes identified with Satan. Beelzebub was also often associated with the practice of witchcraft and became a feature of the Salem witch trials.

In the twentieth century, G.I. Gurdjieff used Beelzebub as the name of the main character in his mystical book Beelzebub's Tales to His Grandson. Later, an influential novel by William Golden, examining the reality of evil in a group of "civilized" children, was entitled Lord of the Flies.

The oldest biblical source of the name Ba‘al Zebûb is a story in 2 Kings 1:2-16, where King Ahaziah of Israel, the son of King Ahab and Queen Jezebel, is seriously injured in a fall and sends messengers to inquire of Ba‘al Zebûb, the god of the Philistine city of Ekron, to learn if he will recover. The prophet Elijah condemns Ahaziah for this act, saying: 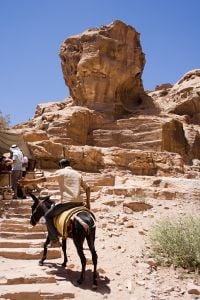 Steps leading to the monastery at Petra, Jordan. "Ba'al Zebul" may have originally meant "Lord of the high place."

Is it because there is no God in Israel for you to consult that you have sent messengers to consult Baal-Zebub, the god of Ekron? Because you have done this, you will never leave the bed you are lying on. You will certainly die!

Ahaziah soon succumbs and his succeeded by his brother, Jehoram (also called Joram).

If the term originally meant "Baal of Flies," it may be that Ahaziah turned to this deity to rid himself of flies which swarmed around the wounds he suffered during his fall. A god who dispersed flies was indeed worshiped at Elis in Greece, and "fly gods" also exist in several other cultures.

However, the original Ba‘al Zebûb might simply mean "Lord of Zebûb," referring to an unknown place called Zebûb. Several similar instances are found in the biblical text, where "Baal Peor," for example, refers to the Baal of a place named Peor (Numbers 25:3), also called Bethpeor (Deuteronomy 3:29).

It has also been suggested that Ba‘al Zebûl was the "Lord of the High Place," worshiped at one or more mountaintop shrines. A similar construction is found in 1 Kings 8:13, where Solomon declares that he has built a heavenly temple for God. Here, the Hebrew term "Beth Zebul" is usually translated "house of dwelling," but the NASB version is probably more accurate in its rendition: "Lofty house." The Jewish Encyclopedia translates "Baal Zebul" as "Baal of the heavenly mansion."

Many scholars thus consider Beelzebub to be a derogatory term invented by the Israelites as a play on its original meaning. In this view, a deity known to the Philistines as the "Lord of the High Place," was denigrated as the "Lord of the Flies." A similar principle is evident in the biblical writers' denigration of King Saul's son Ish-baal—meaning "man of the Lord (Baal)"—by calling him "Ish-bosheth," meaning "man of shame."

In Christianity, the name Beelzebub or Beelzebul may appear as an alternate name for Satan, or else may refer to the name of a lesser devil. This apparently derives from the New Testament's preservation of an otherwise unknown Jewish tradition in which Baal Zebub was thought of as the "prince of demons."

The form Beelzebub was substituted for Belzebul in the Syriac translation and Latin Vulgate translation of the gospels, and this substitution was repeated in the King James Version. The result of this is that the form Beelzebul was mostly unknown to western European and related cultures until more recent translations restored it.

In the Testament of Solomon, chapter 6, Beelzebul appears as prince of the demons and says that he was formerly a leading heavenly angel who was associated with the star Hesperus, the Greek name for the planet Venus (Αφροδíτη) as evening star. This correlates with the traditional interpretation of Lucifer as the "morning star." Seemingly Beelzebul here is either identical with Satan/Lucifer or is his counterpart. Beelzebul claims to cause destruction through tyrants, to inspire men to worship demons, to excite priests to lust, to cause jealousy and murders, and to bring on war.

Texts of the Acts of Pilate (also known as the Gospel of Nicodemus) vary as to whether they use Beelzebul or Beelzebub. Here term comes into use after Jesus has "laid hold on Satan the prince and delivered him unto the power of Hell." The name Beelzebul is then used by Hades—the lord or personification of Hell but not the devil himself—as a secondary name for Satan. 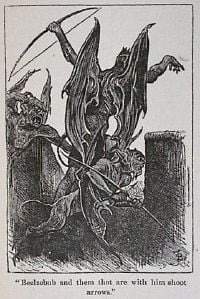 "Beelzebub and them that are with him shoot arrows" from John Bunyan's The Pilgrim's Progress (1678).

In later Christian literature, Beelzebub is usually described as holding a high place in Hell's hierarchy. He is said to have originated in the order of the cherubim. According to the sixteenth century occultist Johannes Wierus, Beelzebub is the chief lieutenant of Lucifer, who is the emperor of Hell, and presides over the "Order of the Fly." Similarly, the seventeenth century exorcist Sebastien Michaelis, in his Admirable History (1612), placed Beelzebub among the three most prominent fallen angels, the other two being Lucifer and Leviathan. Michaelis associated Beelzebub with the deadly sin of pride. However, others identified him as the demon of gluttony.

John Milton featured Beelzebub as the second-ranking of the many fallen cherubim in his epic poem, Paradise Lost, first published in 1667. Milton wrote of Beelzebub: "Than whom, Satan except, none higher sat." Beelzebub is also a character in John Bunyan's The Pilgrim's Progress, first published in 1678. Two eighteenth century works identified an unholy trinity consisting of Beelzebub, Lucifer, and Astaroth.

The earliest case associating Beelzebub with witchcraft was the accusation of Jesus acting as a sorcerer and exorcist through his power. In the various later witchcraft scares, Beelzebub was frequently named as an object of supplication by confessed witches. He was also responsible for a famous case of alleged demon possession which occurred in Aix-en-Provence in 1611 involving a nun who named a certain Father Jean-Baptiste Gaufridi as a bewitcher of young nuns. Beelzebub was famously influential in Massachusetts, where his name came up repeatedly during the Salem witch trials. Cotton Mather wrote a pamphlet entitled Of Beelzebub and his Plot.[1]

In the twentieth century, the name Beelzebub took on an entirely different meaning when the Greek-Armenian mystic G. I. Gurdjieff used it as the name of the main character in Beelzebub's Tales to His Grandson. The plot of the book revolves around the ruminations of a space alien known as Beelzebub to his grandson Hussein, as they travel towards Beelzebub's home planet. William Golden's influential novel The Lord of the Flies portrayed a group of English boys who turned to primitive evil and superstition after being shipwrecked on a deserted island.

Retrieved from https://www.newworldencyclopedia.org/p/index.php?title=Beelzebub&oldid=1062961
Categories:
Hidden category:
This page was last edited on 17 January 2022, at 00:20.
Content is available under Creative Commons Attribution/Share-Alike License; additional terms may apply. See Terms of Use for details.