Battles of the Marne

There were two Battles of the Marne fought during World War I. The first (also known as the Miracle of the Marne) was a battle fought from September 5, to September 12, 1914. It resulted in a Franco-British victory against the German army under Chief of Staff Helmuth von Moltke the Younger. The second (also known as the Battle of Reims) was a major battle fought from July 15 to August 5, 1918, near the Marne River. It was the last major German offensive on the Western Front, and failed when an Allied counterattack led by French forces overwhelmed the Germans, inflicting a severely number of casualties. The loss caused the Germans to tactically retreat and they never regained the offensive. The allies' successive victories following the second battle of the Marne led to the signing of the armistice on November 11, 1918, and the Treaty of Versailles. The war can be represented as totalitarian regimes verses democratic regimes, but that is a somewhat simplistic analysis because rivalry and jealousy between the two sides was a fundamental issue. Germany felt that it was entitled to an empire; Great Britain, France, and even Belgium possessed extensive overseas territory while Germany had a small number of colonies. The democratization process, though, was more advanced among the Allies than in Germany and her main ally, the Ottoman Empire. The hope of many that such battles as those along the Marne River would be part of the war that ended all war proved to be far too optimistic, as the world continued to experience war despite many efforts to create a lasting peace that were initiated in the years after 1918.

By the end of August 1914, the whole Allied army on the Western Front had been forced into a general retreat back towards Paris. Meanwhile the two main German armies continued through France. It seemed that Paris would be taken as both the French Army and the British Expeditionary Force fell back towards the Marne River.

British troops suffered heavy casualties during the German attack into France. Field Marshal Sir John French, commander of the British Expeditionary Force (BEF), blamed his heavy losses on French vacillation and uncoordinated withdrawals. In particular, he blamed French General Lanrezac, commander of the French Fifth Army, for Lanrezac's failure to fight and unannounced pullbacks. This notwithstanding, the fact that communications between the French and BEF were very poor, and that Lanrezac's timely and often necessary withdrawals in the face of superior German forces probably saved the bulk of the French Fifth Army from being destroyed in the early weeks of the war.

As the German First and Second Armies approached Paris, they began to swerve to the southeast away from Paris, exposing their right flank to the allies. By September 3, Joffre recognized the German armies' tactical error, and quickly made plans to halt the French and British withdrawal and attack the Germans all along the front. The British army and the French Sixth Army were given the job of attacking the exposed right flank of the German First Army. Joffre personally visited Field Marshal French and secured French's agreement to participate in the attack. The attack was set to begin on the morning of September 6. However, General Alexander von Kluck, the commander of the German First Army detected the approach of the Allied forces on September 5, and, too late, began to wheel his Army to face the west. In the morning of September 5, battle commenced when the advancing French Sixth Army came into contact with cavalry patrols from Gen. Hans H. K. Gronau's IV Reserve Corps on the right flank of the German First Army near the Ourcq River. Seizing the initiative in the early afternoon, Gronau's two divisions attacked with light artillery and infantry into the gathering Sixth Army and pushed it back into a defensive posture before the planned allied assault for the following day, but the threat to the French offensive by Kluck's wheeled First Army in this preliminary Battle of the Ourcq was later reduced both by the arrival of the taxicab reinforcements from Paris and orders for Kluck to retreat to the Aisne River, delivered by Moltke's staff officer, Lieutenant Colonel Richard Hentsch.[1]

Von Kluck, in turning to meet the French preparations for attack on his right flank, opened up a 50 km (30 mile) wide gap in the German lines between his First Army and the German Second Army, commanded by the cautious General Karl von Bülow, which was located to the left of the First Army. Allied reconnaissance planes discovered the gap and reported it to commanders on the ground.[2] The Allies were prompt in exploiting the break in the German lines, dispatching troops from the BEF to join the French Fifth Army in pouring through the gap between the two German armies, the right wing of the Fifth Army simultaneously attacking the German Second Army.

Nevertheless, the German forces were close to achieving a breakthrough against Maunoury's beleaguered Sixth Army between September 6, and September 9—the Sixth Army was aided on September 7, by 6,000 French reserve infantry troops ferried from Paris in around 600 taxi cabs. The following night, on September 8, the aggressive French commander General Franchet d'Esperey and his Fifth Army launched a surprise attack against the German Second Army, serving to further widen the gap between the German First and Second Armies. D'Esperey was a recent appointment, Joffre having given him command of the Fifth Army in place of the dismissed General Charles Lanrezac, who was deemed, by Joffre, to be too cautious and lacking in "offensive spirit."

By September 9, it looked as though the German First and Second Armies would be totally encircled and destroyed. General von Moltke suffered a nervous breakdown upon hearing of the danger. His subordinates took over and ordered a general retreat to the Aisne River to regroup. The Germans were pursued by the French and British, although the pace of the Allied advance was slow—a mere 19 km (12 miles) a day. The German armies ceased their retreat after 65 km (40 miles), at a point north of the Aisne River, where they dug in, preparing trenches that were to last for several years.

The German retreat between September 9 and September 13, marked the abandonment of the Schlieffen Plan. Moltke is said to have reported to the Kaiser: "Your Majesty, we have lost the war." In the aftermath of the battle, both sides dug in and four years of stalemate ensued.

Following the failures of the Spring Offensive to end the war, Erich Ludendorff, Chief Quartermaster-General and virtual military ruler of Germany, believed that an attack through Flanders (a region overlapping parts of northern Belgium, France, and the Netherlands) would give Germany a decisive victory over the British Expeditionary Force (BEF), the most potent Allied force on the Western Front at that time. To shield his intentions and draw Allied troops away from Belgium, Ludendorff planned for a large diversionary attack along the Marne.

Large numbers of British soldiers and 85,000 American troops joined the French for the battle. The German attack to the east of Reims was stopped on the first day, but the attack to the west broke through the French Sixth Army and advanced nine miles before the French Ninth Army, helped by American, British, and Italian troops, stalled the advance on July 17.

The German failure to break through prompted Ferdinand Foch, the Allied Supreme Commander, to authorize a major counter-offensive on July 18; 24 French divisions, joined by other Allied troops including 8 large U.S. divisions and 350 tanks, attacked the recently formed German salient. The French were entirely successful, with Mangin's Tenth Army and Degoutte's Sixth Army advancing five miles on the first day alone. Berthelot's Fifth Army and Eben's Ninth Army launched additional attacks in the west. The Germans ordered a retreat on July 20, and were forced all the way back to the positions where they had started their Spring Offensives earlier in the year. The Allied counterattack petered out on August 6, when well-entrenched German troops ground it to a halt.

The disastrous German defeat led to the cancellation of Ludendorff's planned invasion of Flanders and was the first step in a series of Allied victories that ended the war. 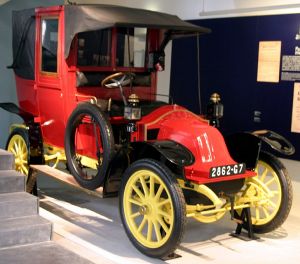 One of the taxi cabs of the Marne.

The war became a stalemate when the Allies won the Battle of the Marne. It was the second major clash on the Western Front (after the Battle of the Frontiers) and one of the most important single events of the war. The German retreat left in ruins the Schlieffen Plan and German hopes of a quick victory in the west. Its army was left to fight a long war on two fronts.

The Battle of Marne was also one of the first major battles in which reconnaissance planes played a decisive role, by discovering weak points in the German lines and allowing the allies to take advantage of them.[3]

The First Battle of the Marne is best remembered for the approximately six hundred Parisian taxicabs, mainly Renault AG's, commandeered by French authorities and used to transport six thousand French reserve infantry troops to the battle. Their arrival has traditionally been described as critical in stopping a possible German breakthrough against the 6th Army. Today, some historians question their real impact. Their impact on morale, however, is undeniable: The taxis de la Marne were perceived as a manifestation of the union sacrée of the French civilian population and its soldiers at the front, reminiscent of the people in arms who had saved the French Republic in 1794.

More than two million men fought in the First Battle of the Marne, of whom more than 500,000 were killed or wounded.

These losses were the highest sustained in a single battle for the rest of the war.

Retrieved from https://www.newworldencyclopedia.org/p/index.php?title=Battles_of_the_Marne&oldid=1062918
Categories:
Hidden category:
This page was last edited on 16 January 2022, at 22:10.
Content is available under Creative Commons Attribution/Share-Alike License; additional terms may apply. See Terms of Use for details.