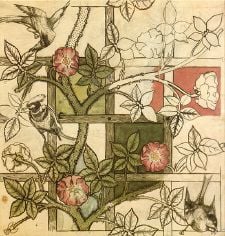 In the United States, the terms Arts and Crafts movement, American Craftsman, or Craftsman style are often used to denote the style of architecture, interior design, and decorative arts that prevailed between the dominant eras of Art Nouveau and Art Deco, or roughly the period from 1910 to 1925. 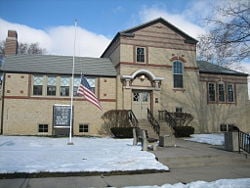 The Oregon Public Library in Oregon, Illinois, U.S.A. is an example of Arts and Crafts in a Carnegie Library. 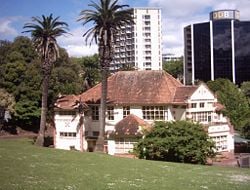 The Arts and Crafts Movement began primarily as a search for authentic and meaningful styles for the nineteenth century and as a reaction to the eclectic revival of historic styles of the Victorian era and to "soulless" machine-made production as a consequence of the technological shift brought on by the Industrial Revolution. Considering the machine to be the root cause of all repetitive and mundane evils, some of the protagonists of this movement turned entirely away from the use of machines and towards handcraft, which tended to concentrate their productions in the hands of sensitive but well-heeled patrons.

Yet, while the Arts and Crafts movement was in large part inspired by a reaction to industrialization, if looked at on the whole, it was neither anti-industrial nor anti-modern. Some of the European factions believed that machines were in fact necessary, but they should only be used to relieve the tedium of mundane, repetitive tasks. At the same time, some Arts and Crafts leaders felt that objects should also be affordable. The conflict between quality production and 'demo' design, and the attempt to reconcile the two, dominated design debate at the turn of the twentieth century.

Those who sought compromise between the efficiency of the machine and the skill of the craftsman thought it a useful endeavor to seek the means through which a true craftsman could master a machine to do his bidding, in opposition to the reality which was much more prevalent during the Industrial Age, name that humans had become virtual extensions of the industrial machine.

The need to reverse the human subservience to the unquenchable machine was a point on which everyone agreed. Yet the extent to which the machine was ostracized from the process was a point of contention debated by many different factions within the Arts and Crafts movement throughout Europe. This conflict was exemplified in the German Arts and Crafts movement, by the clash between two leading figures of the Deutscher Werkbund (DWB), Hermann Muthesius and Henry Van de Velde. Muthesius, also head of design education for German Government, was a champion of standardization. He believed in mass production, in affordable democratic art. Van de Velde, on the other hand, saw mass production as threat to creativity and individuality.

Though the spontaneous personality of the designer became more central than the historical "style" of a design, certain tendencies stood out: reformist neo-Gothic influences, rustic and "cottagey" surfaces, repeating designs, vertical and elongated forms. In order to express the beauty inherent in craft, some products were deliberately left slightly unfinished, resulting in a certain rustic and robust effect. There were also socialist undertones to this movement, in that another primary aim was for craftspeople to derive satisfaction from what they did. This satisfaction, the proponents of this movement felt, was totally denied in the industrialized processes inherent in compartmentalized machine production.

In fact, the proponents of the Arts and Crafts movement were against the principle of a division of labor, which in some cases could be independent of the presence or absence of machines. They were in favor of the idea of the master craftsman, creating all the parts of an item of furniture, for instance, and also taking a part in its assembly and finishing, with some possible help by apprentices. This was in contrast to work environments such as the French Manufactories, where everything was oriented towards the fastest production possible. For example, one person or team would handle all the legs of a piece of furniture, another all the panels, another assembled the parts and yet another painted and varnished or handled other finishing work, all according to a plan laid out by a furniture designer who would never actually work on the item during its creation.

The Arts and Crafts movement sought to reunite what had been ripped asunder in the nature of human work, having the designer work with his hands at every step of creation. Some of the most famous apostles of the movement, such as Morris, were more than willing to design products for machine production, when this did not involve the wretched division of labor and loss of craft talent, which they denounced. Morris designed numerous carpets for machine production in series.

History of the movement 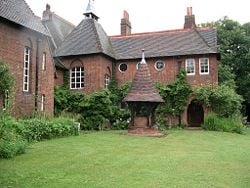 Red House, Bexleyheath, London (1859), by architect Philip Webb for Morris himself, is an exemplary work of this movement in its early stages. There is a deliberate attempt at expressing surface textures of ordinary materials, such as stone and tiles, with an asymmetrical and quaint building composition. Morris later formed the Kelmscott Press and also had a shop where he designed and sold products such as wallpaper, textiles, furniture, etc. Morris's own ideas emerged from the thinking that had informed Pre-Raphaelitism, especially following the publication of Ruskin's book The Stones of Venice and Unto this Last, both of which sought to relate the moral and social health of a nation to the qualities of its architecture and designs. The decline of rural handicrafts, corresponding to the rise of industrialized society, was a cause for concern for many designers and social reformers, who feared the loss of traditional skills and creativity. For Ruskin, a healthy society depended on skilled and creative workers. Morris and other socialist designers such as Crane and Ashbee looked forward to a future society of free craftspeople. The aesthetic movement, which emerged at the same period, fed into these ideas. In 1881 the Home Arts and Industries Association was set up by Eglantyne Louisa Jebb in collaboration with Mary Fraser Tytler (later Mary Watts) and others to promote and protect rural handicrafts. A group of reformist architects, followers of Arthur Mackmurdo, later established the Art Workers Guild to promote their vision of the integration of designing and making. Crane was elected as its president.

In America in the late 1890s, a group of Boston's most influential architects, designers, and educators, determined to bring to this country the design reforms begun in Britain by William Morris, met to organize an exhibition of contemporary craft objects. The first meeting was held on January 4, 1897, at the Museum of Fine Arts (MFA) to organize an exhibition of contemporary crafts. When craftsmen, consumers, and manufacturers realized the aesthetic and technical potential of the applied arts, the process of design reform in Boston started. Present at this meeting were General Charles Loring, Chairman of the Trustees of the MFA; William Sturgis Bigelow and Denman Ross, collectors, writers and MFA trustees; Ross Turner, painter; Sylvester Baxter, art critic for the Boston Transcript; Howard Baker, A.W. Longfellow, Jr.; and Ralph Clipson Sturgis, architect.

The first American Arts and Crafts Exhibition opened on April 5, 1897 at Copley Hall, featuring over 1,000 objects made by 160 craftsmen, half of whom were women. Some of the supporters for the exhibit were Langford Warren, founder of Harvard's School of Architecture; Mrs. Richard Morris Hunt; Arthur Astor Carey and Edwin Mead, social reformers; and Will Bradley, graphic designer.

The huge success of this exhibition led to the incorporation of The Society of Arts and Crafts, on June 28, 1897, with a mandate to "develop and encourage higher standards in the handicrafts." The 21 founders were interested in more than sales, and focused on the relationship of designers within the commercial world, encouraging artists to produce work with the highest quality of workmanship and design.

This mandate was soon expanded into a credo, possibly written by the SAC's first president, Charles Eliot Norton, which read:

This Society was incorporated for the purpose of promoting artistic work in all branches of handicraft. It hopes to bring Designers and Workmen into mutually helpful relations, and to encourage workmen to execute designs of their own. It endeavors to stimulate in workmen an appreciation of the dignity and value of good design; to counteract the popular impatience of Law and Form, and the desire for over-ornamentation and specious originality. It will insist upon the necessity of sobriety and restraint, or ordered arrangement, of due regard for the relation between the form of an object and its use, and of harmony and fitness in the decoration put upon it.

Widely exhibited in Europe, the Arts and Crafts movement's qualities of simplicity and honest use of materials negating historicism inspired designers like Henry van de Velde and movements such as Art Nouveau, the Dutch De Stijl group, Viennese Secessionstil and eventually the Bauhaus. The movement can be assessed as a prelude to Modernism, where pure forms, stripped of historical associations, would be once again applied to industrial production.

In Russia, Viktor Hartmann, Viktor Vasnetsov and other artists associated with Abramtsevo Colony sought to revive the spirit and quality of medieval Russian decorative arts in the movement quite independent from that flourishing in Great Britain.

The British Utility furniture of World War II was simple in design and based on Arts and Crafts ideas.

In the United States, the Arts and Crafts Movement took on a distinctively more bourgeois flavor. While the European movement tried to recreate the virtuous world of craft labor that was being destroyed by industrialization, Americans tried to establish a new source of virtue to replace heroic craft production: the tasteful middle-class home. They thought that the simple but refined aesthetics of Arts and Crafts decorative arts would ennoble the new experience of industrial consumerism, making individuals more rational and society more harmonious. In short, the American Arts and Crafts Movement was the aesthetic counterpart of its contemporary political movement: Progressivism.

In the United States, the Arts and Crafts Movement spawned a wide variety of attempts to reinterpret European Arts and Crafts ideals for Americans. These included the "Craftsman"-style architecture, furniture, and other decorative arts such as the designs promoted by Gustav Stickley in his magazine, The Craftsman. A host of imitators of Stickley's furniture (the designs of which are often mislabeled the "Mission Style") included three companies formed by his brothers, the Roycroft community founded by Elbert Hubbard, the "Prairie School" of Frank Lloyd Wright, the Country Day School movement, the bungalow style of houses popularized by Greene and Greene, utopian communities like Byrdcliffe and Rose Valley, and the contemporary studio craft movement. Studio pottery—exemplified by Grueby, Newcomb, Teco, Overbeck and Rookwood pottery, Bernard Leach in Britain, and Pewabic Pottery in Detroit—as well as the art tiles by Ernest A. Batchelder in Pasadena, California, and idiosyncratic furniture of Charles Rohlfs also demonstrate the clear influence of Arts and Crafts Movement. Mission, Prairie, and the California Craftsman styles of homebuilding remain tremendously popular in the United States today.

The New Zealand architect James Walter Chapman-Taylor was a follower of the Arts and Crafts Movement.