Gustav Stickley (March 9, 1858 – April 21, 1942) was a furniture maker and the leading spokesperson for the American Craftsman movement, a descendent of the British Arts and Crafts Movement.

Stickley was the most well-known name of the American Arts and Crafts Movement. To this day, the Stickley name is affiliated with the very distinctive clean and simple style of mission furniture, also known as Craftsman style. Original Stickley furniture pieces are expensive and sought after. In addition to being a furniture designer, manufacturer, and entrepreneur, Gustav Stickley was known as a dreamer, who developed a philosophy about initiating young men to adulthood through a combination of hard work, mastery of crafts, academic study, and deep thinking. Stickley conceived of and built Craftsman Farms in Morris Plains, New Jersey with the purpose of establishing a school for young men based on his ideas. His family lived at Craftsman Farms for ten years, enjoying the life as gentleman farmers, but the school never attracted any students.

Stickley was born Gustavus Stoeckel, the oldest boy of eleven children, on March 9, 1858. His parents, Leopold and Barbara Stoeckel had immigrated from Germany to Osceola, Wisconsin. At the time, Osceola was a frontier settlement near the St. Croix River. Leopold scratched out a living as a farmer, cultivating four out of his forty acres. He also worked as a stone mason on occasion. The Stoeckel family was one of the poorer families in the area.

Gustav began working with his father on stone mason jobs, helping to contribute to the family finances. But he quickly developed a distain for heavy work.

At age twelve, Gustav left school. Shortly thereafter, his father abandoned the family for a time. Leopold did return, and moved his family downriver to Stillwater, Minnesota, where work was easier to come by.

Five years later, Leopold abandoned his wife and children for good. Gustav was just seventeen years old. His mother, Barbara packed all the children up and headed for Pennsylvania to be closer to her family, in particular her well-to-do brother, Jacob Schlager. Schlager and his partner Henry William Brandt owned and operated a pair of tanneries and a chair factory in Brandt, Pennsylvania.

At age eighteen, Gustav entered the employ of his uncle Jacob and began learning the furniture making trade. He enjoyed the work and took to it readily. Four short years later, Stickley had shown such mastery of the business, both furniture making and management ability, that the partners promoted him to foreman of the factory that could produce 96,000 chairs a year at full capacity.

Stickley's life was stable and secure. He was surrounded by prosperity, which gave him a new perspective as well as the time and opportunity to educate himself through reading and exposure to cultural opportunities. This gave rise to an ambitious drive in Stickley.

In 1883, the 25-year-old Stickley married 23-year-old seamstress, Eda Simmons. This same year, Gustav and his brothers Charles and Albert went into business together, founding Stickley Brothers and Company in Susquehanna, Pennsylvania.

For the first year of operations, the brothers' business was none other than furniture manufacture. By the beginning of the second year in business, the brothers had opened both a wholesale and retail outlet in Binghamton, New York. The city of Binghamton was a small but steadily growing city with a strong economy rooted in agriculture, manufacture, and retailing. It provided a great market for the furniture the Stickley brothers had to offer, both their own and that of other manufacturers in New England and the Midwest.

Gustav Stickley turned thirty in 1888. He and his wife Eda were the parents of two small children.

Even though his enterprise with his brothers was modestly successful, Stickley aspired to accomplish more. He designed and planned a large department store, although this did not yet manifest. Stickley became part owner of a streetcar line, later partnering with G. Tracy Rogers, a financier in acquiring and operating rail lines that brought shoppers into Binghamton. His most significant step in business in 1888 was to leave his partnership with his brothers and form a new partnership to manufacture furniture with Elgin Simonds. Simonds had already made a name for himself in the furniture business as a salesman. At the time, Gustav Stickley was known only in association with his brothers. It was this same year that the Arts and Crafts Movement was born in England.

As Stickley and Simonds Company came to be, Stickley oversaw manufacture and held the title of treasurer. Simonds was company president and directed sales from an office in New York City. The business grew. Stickley minimized manufacture costs by taking over the furniture workshop at the state prison as prisoners were paid less than a regular wage. This step was controversial and showed that Stickley did not mind going against industry norms. He also found that he enjoyed the role of mentor that he experienced as he trained the inmates in furniture making.

Stickley and Simonds opened a major new manufacturing plant in 1893 in Eastwood, New York. This forced Stickley to divide his time between Auburn where his family lived, and Eastwood. Business demands often kept him away from his family.

Eventually, both the Simonds and the Stickley family made their permanent home in Syracuse. Stickley visited Europe on business once in 1895 and again the following year. Stickley dabbled in real estate investment with his old friend G. Tracy Rogers. He also invented a better wood-bending machine and a belt sander, securing patents in both the United States and Canada.

Financial success allowed the Stickleys to move in to a large, well-appointed home in Syracuse. The Stickley family grew during these years from two children to six.

As Gustav turned 40 in 1898, he began to grow restless with the mass production of elaborate and ornate revivalist reproductions of Stickley and Simonds. He started experimenting with furniture designs that had simpler, cleaner lines and were sturdily built. Around him the Arts and Crafts Movement was growing. Stickley and Simonds began to differ as to the direction the company should take. Ultimately, that same year, Stickley forced Simonds out by buying him out and essentially firing Simonds, the president of the company.

Initially, the Gustav Stickley Company continued to manufacture designs very similar to those of Stickley and Simonds but within two years the furniture designs shifted distinctly toward those simpler designs of his experiments. Within a year, Stickley's new furniture designs had been presented for market nationwide. He began making larger pieces as well.

In 1901, Stickley founded The Craftsman, a periodical which began by expounding the philosophy of the English Arts and Crafts Movement, but which matured into the voice of the American movement. Gustav used the magazine as a tool to educate the middle class on sound design principles and ideas. He worked with architect Harvey Ellis to design house plans for the magazine. Plans for 221 different homes were published in The Craftsman over a fifteen-year period.

Stickley also established the Craftsman Home Builders Club in 1903 to spread his ideas about domestic organic architecture. These ideas had an enormous influence on Frank Lloyd Wright. Stickley believed that:

The word that is best loved in the language of every nation is home, for when a man's home is born out of his heart and developed through his labor and perfected through his sense of beauty, it is the very cornerstone of his life.[1]

Between 1900 and 1916 a style of furniture featuring "…a severely plain and rectilinear style which was visually enriched only by expressed structural features and the warm tones of the wood…" gained popularity in the U.S.[2] This furniture, referred to as mission oak, was an "…American manifestation of the Arts and Crafts movement…."[3] Stickley began making furniture in the mission oak style with the founding of the Craftsman Workshops in Eastwood, New York (now a part of Syracuse, New York) in 1904. His furniture was all handmade rather than machine made, crafted to be simple and useful. It was primarily built from native American oak. The woodworking joints were exposed. Upholstery was carried out with natural materials (canvas and leather). Wood could be varnished but never painted, and there were no unnecessary lines.

He moved his headquarters to New York City in 1905 and planned to establish a rural learning community for boys in Morris Plains, New Jersey to provide an environment where young men could learn furniture building, put in a hard day's work on the farm, and gain exposure to culture and challenging academics. Craftsman Farms was designed to be self-sufficient, with vegetable gardens, orchards, dairy cows, and chickens. The main house there is constructed from chestnut logs and stone found on the property, and exemplifies Stickley's building philosophy. 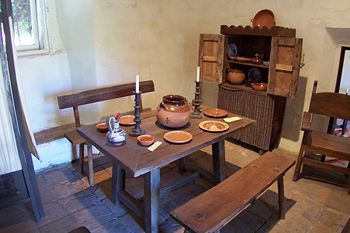 Although initially conceived of as a place for students, the school never attracted any students. Craftsman Farms became the family home. Stickley lived there with his family for ten years. This was a happy time for the family. Stickley indulged his daughters, allowing them to hold parties and dances. His two oldest girls had their weddings at Craftsman Farms. But the planned community never became a reality.

Both the Craftsman magazine and Craftsman Farms were a drain on the profits of the company. This was not a problem during strong financial times but in the face of global tensions leading up to World War I, Americans found themselves in tougher economic times, with less discretionary money. Stickley's business began to struggle and deteriorate. In 1915, he filed for bankruptcy, stopping publication of The Craftsman in 1916, and selling Craftsman Farms in 1917. Stickley never recovered from this business failure.

Following the business failure, the family moved back to Syracuse. Gustav suffered a period of dark despondency. Sadly, also in 1917, Eda suffered a severe stroke. Gustav and Eda's oldest daughters Barbara and Mildred came to stand in the role of caregivers for their parents and their younger siblings. Eda's health never returned. She died quietly in 1919. Gustav spent the remainder of his days experimenting with furniture stains, certain that he was about to create the next best furniture stain. This aspiration never materialized. His daughter Barbara and her husband supported Stickley financially until his death from pneumonia in April of 1942.

In recent years, the Stickley style and Craftsman furniture have become popular once more. In 1988, Barbra Streisand paid $363,000 for a Stickley sideboard from Craftsman Farms. Magazines such as Style 1900 and American Bungalow cater to those interested in the Arts and Crafts Movement.

To this day, the Stickley name is affiliated with the very distinctive clean and simple style of mission furniture, also known as Craftsman style. Original Stickley furniture pieces are expensive and sought after.

Craftsman Farms is on the registry of National Historical Landmarks and is open to the public as a museum. The Stickley's original log home and the surrounding buildings were spared from developers in 1989 when the township of Parsippany, New Jersey bought the property.