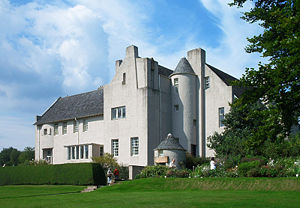 Charles Rennie Mackintosh (June 7, 1868 – December 10, 1928) was a Scottish architect, designer, and watercolorist who was a designer in the Arts and Crafts movement and also the main exponent of Art Nouveau in Scotland. Mackintosh began an apprenticeship with an architect at the age of sixteen, during which he attended evening classes in art at the Glasgow School of Art, where he met his future wife, Margaret MacDonald, her sister Frances MacDonald, and Herbert MacNair. Known as "The Four," they exhibited their works in Glasgow, London and Vienna. Mackintosh developed his own architectural style, a contrast between strong right angles and floral-inspired decorative motifs with subtle curves, evident in works such as the Mackintosh Rose motif. Although moderately popular (for a period) in his native Scotland, most of his more ambitious designs were not built. His most famous works are the Glasgow School of Art (1897-1909) building (now renamed "The Mackintosh Building"), regularly cited by architectural critics as among the very finest buildings in the UK, and the “Art Lover’s House.”

Later in life, disillusioned with architecture, Mackintosh worked largely as a watercolorist, painting numerous landscapes and flower studies, often in collaboration with his wife Margaret. He was interested in the relationships between man-made and naturally occurring landscapes.

Charles Rennie Macintosh was born June 7, 1868, in Glasgow, Scotland, and attended the Allan Glen's School in Scotland. At the age of sixteen he was apprenticed to an architect named John Hutchison and worked under him from 1884 until 1889. Around the time of Mackintosh’s apprenticeship, he became a draftsman for a new architectural practice called Honeyman and Keppie and, in 1901, he joined the practice. During his apprenticeship, Mackintosh attended evening classes in art at the Glasgow School of Art. It was at these classes that he first met Margaret MacDonald (whom he later married), her sister Frances MacDonald, and Herbert MacNair, a fellow apprentice with Mackintosh at Honeyman and Keppie. The group of artists, known as "The Four," exhibited in Glasgow, London and Vienna; these exhibitions helped establish Mackintosh's reputation. The so-called "Glasgow" style was exhibited in Europe and influenced the Viennese Art Nouveau movement known as Sezessionstil (in English, The Secession) around 1900.

Rennie joined a firm of architects in 1889 and developed his own style: a contrast between strong right angles and floral-inspired decorative motifs with subtle curves, such as the Mackintosh Rose motif, along with some references to traditional Scottish architecture. The project that helped make his international reputation was the Glasgow School of Art (1897-1909).

The House for an Art Lover is based on a concept design produced in 1901 by Charles Rennie Mackintosh with his wife, Margaret MacDonald. The building is situated in Bellahouston Park in Glasgow, Scotland. Construction began in 1989 and the house was finally opened to the public in 1996. Mackintosh's original designs were interpreted and realized by John Kane and Graeme Robertson (up to 1990) under Andrew MacMillan, with contributions by many contemporary artists. Original portfolio designs are displayed in each room to allow comparisons.

The house was originally designed for an ideas competition set by the German design magazine Zeitschrift für Innendekoration for a "Haus eines Kunstfreundes" (Art Lover's House). Despite disqualification due to late entry, the portfolio was awarded a prize for "pronounced personal quality, novel and austere form and the uniform configuration of interior and exterior." 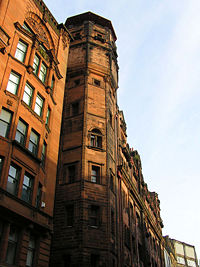 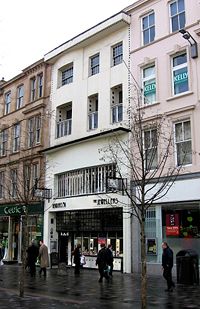 The Willow Tearooms in Sauchiehall Street

Amongst his noted architectural works are: 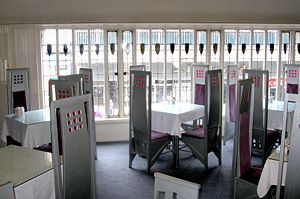 The Room de Luxe at The Willow Tearooms features furniture and interior design by Mackintosh and Margaret Macdonald. 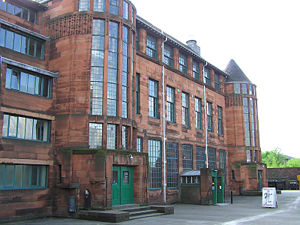 Although moderately popular (for a period) in his native Scotland, most of his more ambitious designs were not built. His designs of various buildings for the 1901 Glasgow International Exhibition were not constructed, as was his "Haus eines Kunstfreundes" (Art Lover's House) in the same year. He competed in the 1903 design competition for Liverpool Cathedral, but lost the commission to Giles Gilbert Scott.

Although the House for An Art Lover was subsequently (1989-1996) built after his death, Mackintosh left many unbuilt designs.

Although Mackintosh's architectural output was fairly small he had a considerable influence on European design. Especially popular in Austria and Germany, Mackintosh's work was highly acclaimed when it was shown at the Vienna Secession Exhibition in 1900. It was also exhibited in Budapest, Munich, Dresden, Venice and Moscow. The Fort, circa 1925 - 1926. Fort Mailly, a ruined sixteenth-century fortification on the outskirts of Port Vendres.

Mackintosh also worked in interior design, furniture, textiles and, metalwork. Much of this work combines Mackintosh's own designs with those of his wife, whose flowing, floral style complimented his more formal, rectilinear work. Like his contemporary Frank Lloyd Wright, Mackintosh's architectural designs often included extensive specifications for the detailing, decoration, and furnishing of his buildings. His work was shown at the Vienna Secession Exhibition in 1900.

Later in life, disillusioned with architecture, Mackintosh worked largely as a watercolorist, painting numerous landscapes and flower studies (often in collaboration with Margaret, with whose style Mackintosh's own gradually converged) in the Suffolk village of Walberswick (to which the pair moved in 1914). By 1923, he had entirely abandoned architecture and design and moved to the south of France with Margaret where he concentrated on watercolor painting. He was interested in the relationships between man-made and naturally occurring landscapes. Many of his paintings depict Port Vendres, a small port near the Spanish border, and the nearby landscapes.

Mackintosh's designs gained in popularity in the decades following his death. His House for an Art Lover was finally built in Glasgow's Bellahouston Park in 1996, and the University of Glasgow (which owns the majority of his watercolor work) rebuilt a terraced house Mackintosh had designed, and furnished it with his and Margaret's work (it is part of the University's Hunterian Museum). The Glasgow School of Art building (now renamed "The Mackintosh Building") is regularly cited by architectural critics as among the very finest buildings in the UK. The Charles Rennie Mackintosh Society tries to encourage a greater awareness of the work of Mackintosh as an important architect, artist and designer.

Retrieved from https://www.newworldencyclopedia.org/p/index.php?title=Charles_Rennie_Mackintosh&oldid=1003150
Categories:
Hidden category:
This page was last edited on 6 February 2017, at 22:21.
Content is available under Creative Commons Attribution/Share-Alike License; additional terms may apply. See Terms of Use for details.