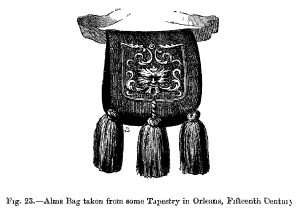 Alms or almsgiving is the general practice of charitable giving to the poor; it is based upon any number of religious teachings. In the Abrahamic religions, alms are given as charity to benefit the poor. In Buddhism, alms are given by lay people to monks to nurture laic virtue, merit and blessings and to ensure monastic continuity. It was a common practice in the ancient world that extended from Greece to China to give away a portion of one's profit or spoils of war.

Related to almsgiving is the practice of giving a tithe. In English, Greek, and Hebrew, the word “tithe” comes from a derivative of the number “ten.” Cuneiform tablets contain frequent references to tithing in ancient Chaldea and Ugarit in Syria. The great temples of Babylonia were largely supported by the esra, or tithe, which was levied on prince and peasant alike. Tithing in ancient cultures is invariably associated with a sacrificial system and offerings to a god or gods.[1]

Giving generously to the poor and to support one's religion is invaluable for one's personal development, as it cultivates the habit of living for the sake of others. Almsgiving also benefits society by redistributing wealth to the most needy. It provides a way for wealthy people to practice virtue, by offering of their wealth to benefit the public good (see philanthropy).

Tithing in the Jewish tradition shows up some five centuries before the Law was given to Moses. In the Book of Genesis, Abraham journeys through the land of Canaan and encounters Melchizedek, who was both king of the city of Salem (modern Jerusalem) and priest of the most High God. In Genesis 14:18–20, Abraham was blessed by Melchizedek and Abraham in return gave Melchizedek “a tithe of all.”

Some Jewish scholars argue, however, that Abraham was giving a tenth of the spoils of war that mostly belonged to the kings of Sodom and Gomorrah. The argument is that this giving was in compliance with ancient traditions but not the tradition of tithing which didn't come until later.

Judaism made charity a central and imperative duty for each believer. In the fifth book of Moses (Deut. 14:22), tithing was made a compulsory obligation.

In 1201 the medieval writer Moses Maimonides codified the Talmudic rules in the Eight Degrees of Charity. The highest sanction given was to the kind of helpfulness that anticipated charity by preventing poverty.[2]

Whereas the principle of almsgiving in Christianity is not a legal concept as in Islam, giving to the poor is regarded as one of the highest duties for any Christian. The offertory is the traditional moment in every Roman Catholic Mass, when alms are collected. In all Christian forms of worship, a collection is made of "tithes and offerings" given for the support of the church and for the relief of the poor, as a central act of Christian worship. In addition, private acts of charity, considered virtuous only if not done for others to admire, are a Christian duty:

Take heed that you do not do your charitable deeds before men, to be seen by them. Otherwise you have no reward from your father in heaven. (Matt. 6:1)

Roman Garrison analyzes how and why the early Christian doctrine that riches prevent entrance into the kingdom of God came to be replaced by a doctrine of "redemptive almsgiving" in the Apostolic Fathers. This new doctrine, which "emerges unchallenged in early Christianity" (10), promotes almsgiving as an alternate form of atonement, "earning the individual entrance into the kingdom of God" (10) and competing with the death of Jesus as "the unique atonement for sin

Islamic scriptural rules on alms are quite reminiscent of the biblical instructions:

In Islam, zakat, or the giving of alms, is the third of the five pillars of Islam. Various rules attach to the practice, but in general terms, it is obligatory to give away 2.5 percent of one's savings and business revenue, as well as 5-10 percent of one's harvest, to the poor. The recipients include the destitute, the working poor, those who are unable to pay off their own debts, stranded travelers, and others who need assistance, with the general principle of zakaah always being that the rich should pay it to the poor. 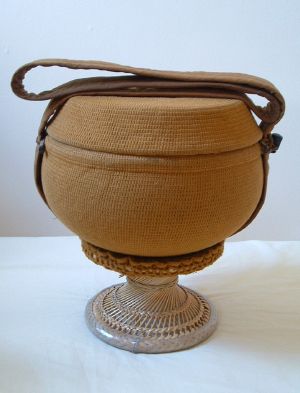 In Buddhism, alms or almsgiving is the respect given by a lay Buddhist to a Buddhist monk. The monk will then pray for the giver's family or requested others. It is not charity as presumed by Western interpreters. It is closer to a symbolic connection to the spiritual and to show humbleness and respect in the presence of normal society. The visible presence of monks is a stabilizing influence. The act of alms giving assists in connecting the human to the monk and what he represents. As the Buddha has stated:

Householders & the homeless [monastics]
in mutual dependence
both reach the true Dhamma.... (Itivuttaka 4.7)[3]

In Theravada Buddhism, many monks (Pāli: bhikkhus) go on a daily almsround (or pindabat) to collect food. This is often perceived as giving the laypeople the opportunity to make merit (Pāli: puñña). Money should not be accepted by a Buddhist monk, although nowadays not many monks keep to this rule (the exception being the monks of the Thai Forest Tradition and other Theravada traditions which focus on vinaya and meditation practice). In countries that follow Mahayana Buddhism, it has been impractical for monks to go on a daily almsround. In China, Korea and Japan, monasteries were situated in remote mountain areas where it could take days to reach the nearest town, thus making the daily almsround impossible. In the Himalayan countries, the large number of bikshus would have made an almsround a heavy burden on families. Competition with other religions for support also made daily almsrounds difficult and even dangerous; the first monks in the Silla dynasty of Korea were said to be beaten due to prevailing attitudes toward the Buddhist minority at the time.

Total willingness to give is the wish-granting gem for fulfilling the hopes of wandering beings.
It is the sharpest weapon to sever the knot of stinginess.
It leads to bodhisattva conduct that enhances self-confidence and courage,
And is the basis for universal proclamation of your fame and repute.
Realizing this, the wise rely, in a healthy manner, on the outstanding path
Of (being ever-willing) to offer completely their bodies, possessions, and positive potentials.
The ever-vigilant lama has practiced like that.
If you too would seek liberation,
Please cultivate yourself in the same way.[6]

In Buddhism, giving of alms, is the beginning of one's journey to Nirvana (Pāli: nibbana). In practice, one can give anything with or without thought for Nibbana. This would lead to faith (Pāli: saddha), one key power (Pāli: bala) that one should generate within oneself for the Buddha, Dhamma and Sangha.

According to the Pāli canon:

Of all gifts [alms], the gift of Dhamma is the highest.[7]