Acts of Paul and Thecla

The Acts of Paul and Thecla is a story of Saint Paul's influence on a young virgin named Thecla, whose devotion is rewarded by miraculous signs including several dramatic rescues from martyrdom by fire and wild beasts.

One of the writings of the New Testament Apocrypha, the Acts of Paul and Thecla was widely read in the early Christian churches and survives in numerous manuscripts. It contributed to Saint Thecla's veneration as a "protomartyr" and even as an "equal of the apostles" in Orthodox tradition. However, it also raised concerns over its negative attitude toward marital sex and its approval of Thecla's performing various acts, such as preaching the Gospel, baptizing herself, and dressing in men's clothing.

The text preserves a detailed description of Paul's physical appearance, which influenced many later writers and artists. It is seen by some modern commentators as having feminist implications.

Saint Thecla was venerated widely in late antiquity and is recognized today by both the Roman Catholic and Eastern Orthodox traditions. Several churches are dedicated to her.

Early on in these Acts, Saint Paul receives a full physical description that may reflect oral tradition. In the Syriac text, "he was a man of middling size, and his hair was scanty, and his legs were a little crooked, and his knees were projecting, and he had large eyes." His eyebrows met, "his nose was somewhat long, and he was full of grace and mercy. At one time he seemed like a man, and at another time he seemed like an angel." The Armenian text adds that his eyes were blue.[1]

Paul is described as traveling to Iconium, proclaiming "the word of God about abstinence and the resurrection." He gave his sermons in the house of Onesiphorus, including a series of beatitudes. Among them are the following:

Thecla, a virgin of noble birth who was betrothed to a man named Thamyris, listened to Paul's "discourse on virginity" from her window in an adjacent house. She became enraptured, without moving from the spot for days. Thecla's mother and fiancée became concerned that Thecla had fallen under a trance: "Thecla, my betrothed, why sittest thou thus?" implored Thamyris, "and what passion is it that holdeth thee in amaze."

Thamyris soon discovered that Paul taught a deeply disturbing doctrine: "He defrauds the young men of their wives and the maidens of their husbands, saying, 'You have no resurrection unless you continue in chastity and do not defile the flesh, but keep it pure.'" 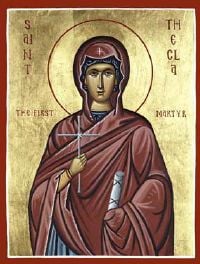 Thamyris then brought city officials, together with an angry mob, to arrest Paul and bring him to the governor, Castelius. The governor questioned the apostle, and Paul admitted that "God has sent me that I may sever them from corruption and uncleanness and all pleasure and death, that they may sin no more." This was enough to convince Castelius that Paul should be held in prison until the matter could be more fully investigated.

Thecla, meanwhile, bribed a guard to gain entrance to the prison and sat at Paul's feet all night listening to his teaching and "kissing his bonds." When her family found her in this posture, both she and Paul were brought before the governor for sentence. "Why won't you marry Thamyris, in accordance with the law of the Iconians?" Castelius asked Thecla. She, however, said nothing in reply, gazing steadfastly at Paul instead. He now understood that Thecla had shamefully abandoned Thamyris after spending the night with Paul. At her mother's shocking request, the governor sentenced Thecla to be burned at the stake, in order that "all the women who have been taught by this man may be afraid." Paul, meanwhile, was sentenced to scourging and expulsion.

Stripped naked before a huge crowd, Thecla was put to the fire, but she was saved by a miraculous storm which God sent to put out the flames. After her joyous reunion with Paul, Thecla requested baptism as a Christian, but Paul declined, prophetically predicting that she would receive "the water" in due course.

Paul and Thecla then traveled to Pisidian Antioch, in today's Turkey, where a nobleman named Alexander desired Thecla and offered Paul money for her. Paul pretended not to know her, and Alexander then attempted to take Thecla by force. Thecla successfully fought him off, beating him in the process, to the amusement of the townspeople. Alexander then dragged her before the governor for assaulting a nobleman. Despite the protests of the city's women, Thecla was sentenced to be torn by wild beasts. To grant Thecla's request that her virginity be kept intact at her death, a certain "queen" Tryphaena took her into protective custody overnight.

Thecla was then tied to a fierce lioness and paraded through the city, but the lioness only licked her feet. Later she was again stripped and thrown to additional wild beasts in the city's arena, accused now of "sacrilege." The women of the city again protested against the injustice, and Thecla was once more protected from death, first by the lioness, who fought off the other beasts, and then by a series of other miracles.

Near the end of her ordeal, Thecla famously baptized herself in a tank of water containing wild seals which were meant to kill her, saying: "In the name of Jesus Christ do I baptize myself on the last day." A miraculous fire then flashed, and the seals floated to the surface dead. A cloud of fire protected Thecla from further harm from the other beasts, as well as—the author is careful to note—from being seen naked by the crowd. Finally Tryphaena and the other women of the city intervened, and the governor officially pardoned Thecla from further persecution. Thecla then preached the Gospel to Tryphaena and her household, most of whom became Christians.

Finally, Thecla, who still "yearned for Paul" disguised herself as a man and returned to Paul at Myra, declaring with joy that she herself was now a baptized Christian. Paul commissioned her to continue to preach the Gospel. She returned to Iconium, finding that her betrothed husband had died. After a brief reunion with her mother, she went on to Seleucia, where she "enlightened many."

Some manuscripts add that at the age of 90, Thecla was living as a hermit on a mountain where young men went up to ill-treat her. She prayed, and the mountain miraculously opened to protect her, closing behind her after she entered it. Some texts also add that she went underground to Rome, to account for the reported presence of her body on one of the catacombs there.

The story of Paul and Thecla was probably written in the second century. It stands as a distinct manuscript in numerous copies that are still extant. However, the discovery of a Coptic text of the longer Acts of Paul containing the Thecla narrative suggests that the abrupt opening of the Acts of Paul and Thecla is probably due to its being an excerpt of that larger work.[2]

The story is attested to as early as Tertullian, De bapistero 17:5 (c. 190 C.E.). Tertullian, a critic of the work, states that it was written in honor of Saint Paul by a presbyter of Asia who was degraded from his office when his fraud was exposed about 160 C.E.

In the Eastern Church, the Acts of Paul and Thecla was widely circulated in Greek, Syriac, and Armenian is evidence of the veneration of Thecla of Iconium. There are also Latin, Coptic, and Ethiopic versions, sometimes differing widely from the Greek. In the Ethiopic edition the story of Thecla's preaching and baptizing is omitted. 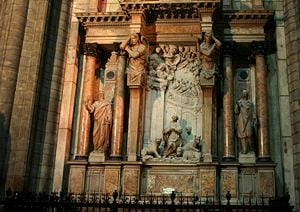 Saint Thecla among the lions, from the altar of Santa Thecla in in the Cathedral of Milan, Italy.

Some believe that a legend concerning a local martyr named Tecla may have inspired the story, in which she was connected to Paul of Tarsus and miraculously saved from actual martyrdom. The cult of Saint Thecla was in wide evidence, and the story made her the most famous early female saint.

Tertullian complains that some Christians in Alexandria were using the example of Thecla to legitimize women's roles of teaching and baptizing in the church (De Baptismo 17). This in itself is significant for reconstructing the second-century struggles against women in positions of authority, notably among Gnostic and Montanist Christians. (Tertullian himself was a Montanist, but opposed women acting as priests.)

Some modern scholars see the Acts of Paul and Thecla as a proto-feminist text. In this understanding, Thecla is abused by men and their world and yet refuses to conform to its expectations, marriage patterns, dress code, and definition of the priesthood. She boldly asserts her independence, receiving support from many women.

Paul himself is also an ambiguous figure in this work. His teachings lead Thecla into trouble, and yet Paul is never there when the trouble comes, even denying he knows her and inexplicably leaving her to defend herself against an attempted rape.

The presentation of Paul as an ardently ascetic preacher, actively discouraging marriage, is very different from that of the (probably pseudonymous) Pastoral Epistles. For instance, 1 Timothy 4:1-3 has Paul explicitly condemning anyone who forbids marriage. In the unchallenged Pauline epistles, Paul indeed seems to prefer celibacy to marriage, but is careful not to forbid marriage. In 1 Corinthians 7, Paul says: "it is well for a man not to touch a woman" (7:1). This text has been interpreted as ideologically closer to Paul and Thecla. However, the text continues:

”Now to the unmarried and the widows I say: It is good for them to stay unmarried, as I am. But if they cannot control themselves, they should marry, for it is better to marry than to burn with passion." (1 Cor: 8-9)

In any event, Paul and Thecla indicates one possible understanding of Paul's legacy in the second century, and it is well known that there were Christian groups who practiced abstinence from sex, even among those who were married. 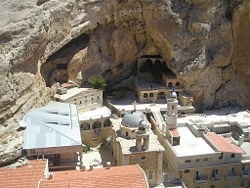 The Church of Saint Thecla in Maaloula, Syria

In the Eastern Church, the wide circulation of the Acts of Paul and Thecla is evidence of her veneration. She was called "Apostle and protomartyr among women" and even "equal to the apostles." She was widely cited as an ascetic role model for women. Her cult flourished particularly at Seleucia (one site where she was said to be buried), Iconium (present day Konya), and Nicomedia. The cult also appeared, at least as early as the fourth century, in Western Europe.

In Bede's martyrology, Saint Thecla is celebrated on September 23, which is still her feast day in the Roman Catholic Church. The Orthodox churches commemorate her on September 24. Her name is given on several other days in the Martyrologium Hieronymianum.

In Maalula, Syria, there is a monastery of St. Thecla, built near what is said to be her cave. Santa Tecla is the patron saint of Tarragona, Spain, where her feast day is the major fiesta of the city and the cathedral is dedicated to her. A Roman Catholic parish in Pembroke, Massachusetts is named for Saint Thecla.