Abba Eban (Hebrew: אבא אבן, born Aubrey Solomon Meir) (February 2, 1915 - November 17, 2002) was an Israeli diplomat and politician who was for many years the voice of the young nation of Israel to the international community.

Born in South Africa, he excelled as a student of foreign languages and served as a major in the British Army during WWII. After the war, he worked for the Jewish Agency as an information officer and served as the Agency's liaison with the United Nations, playing a key role in the formulation and passage of the UN Resolution 181 to partition Palestine in 1947. In 1949, Eban became Israel's permanent ambassador to the UN, remaining in that position until 1959 and also serving as his country's envoy to the United States.

In 1959, Eban was elected to the Israeli Knesset. He served as the nation's minister of education and culture from 1960 to 1963; from 1959 to 1966, he also headed the Weizmann Institute of Science. From 1966 to 1974, during which period Israel fought two major wars, he was the nation's foreign minister, eloquently speaking on his country's behalf at the UN Security Council. Known as a "dove" in Israel's internal foreign policy debates, he then returned to the Knesset as a Labour Party member until 1988.

The winner of the Israel Prize in 2000, Eban was the author of several books on Israeli history and foreign policy. It was Eban who famously quipped: "The Arabs never miss an opportunity to miss an opportunity" in the peace process.

Born in Cape Town, South Africa, Eban moved to England at an early age. As a child, he was sent to his grandfather's house every weekend to study the Hebrew language and biblical literature. He was educated at St. Olave's Grammar School, Southwark before studying classics and Oriental languages at Queens' College, Cambridge. After graduating with high honors, he researched Arabic and Hebrew as a fellow of Pembroke College from 1938–1939.

At the outbreak of World War II, Eban went to work for Chaim Weizmann at the World Zionist Organization in London beginning in December 1939. A few months later he joined the British Army as an intelligence officer, where he rose to the rank of major. He also served as a liaison officer for the Allies to the Jewish Yishuv—the body of Jewish residents in the Holy Land before the establishment of the State of Israel. Drawing on his linguistic skills, in 1947, he translated the 1937 novel, Maze of Justice: Diary of a Country Prosecutor by the prominent Egyptian writer Tawfiq al-Hakim, from the original Arabic.

Israel voice to the world 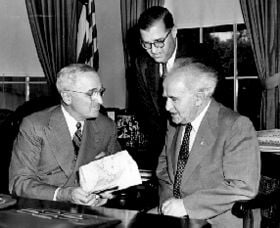 Eban then moved back to London to work in the Jewish Agency's information department and was posted from there to New York City, where the General Assembly of the United Nations was considering the "Palestine Question." He was appointed as a liaison officer to the United Nations Special Committee on Palestine, where he was successful in attaining approval for the partition of Palestine into Jewish and Arab segments—Resolution 181.

At this stage, Eban officially changed his name from Aubrey to the Hebrew word Abba, meaning "Father," as he could foresee himself as a father of the nation of Israel. However, he did not use the title informally among friends.

Eban spent a decade at the United Nations, where he became known as the face and voice of Israel. During the same period, he also served as his country's ambassador to the United States and was Israel's best known spokesman to the American public. In addition to being a skilled diplomat, Eban was renowned for his oratorical skills. His polished presentation, grasp of history, and powerful speeches gave him authority in a United Nations that was generally skeptical of Israel or even hostile to it. He was fluent in ten languages. In the words of Henry Kissinger:

I have never encountered anyone who matched his command of the English language. Sentences poured forth in mellifluous constructions complicated enough to test the listener’s intelligence and simultaneously leave him transfixed by the speaker’s virtuosity.

Eban often faced difficult odds at the UN. He thus quipped: "If Algeria introduced a resolution declaring that the earth was flat and that Israel had flattened it, it would pass by a vote of 164 to 13 with 26 abstentions." 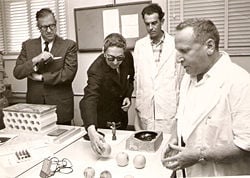 Abba Eban (left) escorting the King of Nepal in a 1958 visit at the Weizmann Institute in Rehovot.

Eban left the United States in 1959 and returned to Israel, where he was elected to the Knesset (the Israeli parliament) as a member of Mapai, the center-left "Land of Israel Workers' Party," then the dominant force in Israeli politics. He served under David Ben-Gurion as minister of education and culture from 1960 to 1963, then as deputy to prime minister Levi Eshkol until 1966. Through this entire period (1959–1966), he also served as president of the Weizmann Institute in Rehovot.

From 1966 to 1974, Eban was Israel's foreign minister. He articulately defended the country's reputation after the 1967 Six-Day War. However, he was also a strong supporter of giving back the territories occupied in the war in exchange for peace. He played an important part in the shaping of UN Security Council Resolution 242 calling for "the establishment of a just and lasting peace in the Middle East," based on Israeli withdrawal from the occupied territories, as well as UN Security Council Resolution 338 in 1973, calling for a cease fire in the Yom Kippur War and urging the implementation of Resolution 242.

Eban was at times criticized for not voicing his opinions in Israel's internal debates. However, he was generally known to be on the "dovish" side of Israeli politics and was increasingly outspoken after leaving the cabinet. In 1977 and 1981, it was widely understood that Shimon Peres intended to name Eban as foreign minister, had the Labour Party won those elections, and Eban's accommodationist views may have been a factor in the Labour coalition's first-ever electoral defeat, to the Likud party under Menachem Begin.

Eban was offered the chance to serve as minister without portfolio in the 1984 national unity government, but chose to serve instead as chair of the Knesset's Foreign Affairs and Defense Committee from 1984 to 1988. In 1988, after three decades in the Knesset, Eban lost his seat over internal splits in the Labour Party.

He devoted the rest of his life to writing and teaching, including serving as a visiting academic at Princeton University, Columbia University and The George Washington University. He also narrated television documentaries including Heritage: Civilization and the Jews (PBS, 1984), for which he was host, Israel, A Nation Is Born (1992), and On the Brink of Peace (PBS, 1997). He died in 2002, and was buried in Kfar Shmaryahu, north of Tel Aviv.

Abba Eban was for decades Israel's most well-known face and voice to the international community, using his gifts for language and oratory to great effect on his country's behalf. In 2001, Eban received the Israel Prize, his country's highest honor.

He and his wife, Shoshana (Suzy) Ambache had a son and one daughter. Eban's brother-in-law is the late Chaim Herzog, the sixth president of Israel. Herzog's son Isaac Herzog is a minister in Israel's Knesset. Eban's cousin, Oliver Sacks, is a neurologist and author and his son, Eli Eban, is a renowned clarinetist who teaches at Indiana University. Eli has two children, Yael and Omri Eban. His nephew, Jonathan Lynn is a filmmaker and script writer known for satirical BBC shows Yes Minister and Yes, Prime Minister.

Eban's comment that "Arabs never miss an opportunity to miss an opportunity" (for peace) made after the Geneva peace talks in December 1973, is often quoted. His many books on Israeli history and foreign policy are still widely read today.