Masada (a romanization of the Hebrew מצדה, Mitzada, from מצודה, metzuda, "fortress") is the name for a site of ancient palaces and fortifications in the South District of Israel on top of an isolated rock plateau on the eastern edge of the Judean Desert overlooking the Dead Sea. Masada became famous for its significance in the First Jewish-Roman War (Great Jewish Revolt), when a siege of the fortress by troops of the Roman Empire allegedly led to a mass suicide of the site's Jewish Sicarii or Zealot defenders when defeat became imminent.

Masada came to symbolize courage, patriotism, and self-defense for Jews. Its story has helped to counter the sentiment that Jews were always victims, always subject to other peoples' action, and never actors in their own right. In this view, the defenders of Masada resisted and died bravely, whether by their own hand or at the hands of others. Modern Israeli soldiers have often made vows to defend the State of Israel standing atop the fortress. The Masada story also helped to inspire the Warsaw Uprising during World War II, one of the first modern instances when Jews put aside their traditional submissive posture to take up heroic though futile resistance against an overwhelming oppressor.

The cliffs on the east edge of Masada are about 1,300 feet high, dropping off to the Dead Sea, and the cliffs on the west are about three hundred feet high; the natural approaches to the cliff top are very difficult. The top of the plateau is flat and rhomboid-shaped, about 1,800 by 900 feet. There was a casemate wall around the top of the plateau totaling 4,300 feet long and 12 feet thick with many towers, and the fortress included storehouses, barracks, an armory, the palace, and cisterns that were refilled by rainwater. Three narrow, winding paths led from below to fortified gates.

Dovecote at Masada, where ashes were probably stored—the openings have been shown to be too small for pigeons to fit.

According to Flavius Josephus, a first century Jewish Roman historian, Herod the Great fortified Masada between 37 and 31 B.C.E. as a refuge for himself in the event of a revolt. In 66 C.E., at the beginning of the First Jewish-Roman War (also called the Great Jewish Revolt) against the Roman Empire, a group of Jewish rebels called the Zealots (kana'im, "zealous ones," commanded by Elazar ben Ya'ir (who may have been the same person as Eleazar ben Simon), who objected to Roman rule of Judea (as the Roman province of Iudaea, its Latin name) took Masada from the Roman garrison stationed there. In 70 C.E., they were joined by additional Zealots and their families who were expelled from Jerusalem by the other Jews living there shortly before the destruction of Jerusalem (and the Second Temple), and for the next two years used Masada as their base for raiding and harassing Roman and Jewish settlements alike.

Remnants of one of several legionary camps at Masada, just outside the circumvallation wall which can be seen next to it.

In 72 C.E., the Roman governor of Iudaea, Lucius Flavius Silva, marched against Masada with the Roman legion X Fretensis and laid siege to the fortress. After failed attempts to breach the wall, they built a circumvallation wall and then a rampart against the western face of the plateau, using thousands of tons of stones and beaten earth. Josephus does not record any major attempts by the Zealots to counterattack the besiegers during this process, a significant difference from his accounts of other sieges against Jewish fortresses, suggesting that perhaps the Zealots lacked the equipment or skills to fight the Roman legion. Some historians also believe that Romans may have used Jewish slaves to build the rampart, whom the Zealots were reluctant to kill because of their beliefs.

A view of the ramp from the top.

The rampart was complete in the spring of 73 C.E., after approximately two to three months of siege, allowing the Romans to finally breach the wall of the fortress with a battering ram on April 16. When they entered the fortress, however, the Romans discovered that its approximately one thousand defenders had set all the buildings but the food storerooms ablaze and committed mass suicide rather than face certain capture or defeat by their enemies (which would probably have led to slavery or execution). Because Judaism strongly discourages suicide, however, the defenders were reported to have drawn lots and slain each other in turn, down to the last man, who would be the only one to actually take his own life. The storerooms were apparently left standing to show that the defenders retained the ability to live and chose the time of their death over slavery. This account of the siege of Masada was related to Josephus by two women who survived the suicide by hiding inside a cistern along with five children and repeated Elazar ben Yair's final exhortation to his followers, prior to the mass suicide, verbatim to the Romans. Josephus records that the besieged swore that while they could still do so, they would die free rather than enslaved:

But certainly our hands are still at liberty, and have a sword in them; let them then be subservient to us in our glorious design; let us die before we become slaves under our enemies, and let us go out of the world, together with our children and our wives, in a state of freedom.[1]

Josephus has Elazer admitting that it had been wrong to resist Rome, and attributing the Jew's defeat to God's displeasure:

Wherefore, consider how God hath convinced us that our hopes were in vain, by bringing such distress upon us in the desperate state we are now in, and which is beyond all our expectations; for the nature of this fortress which was in itself unconquerable, hath not proved a means of our deliverance; and even while we have still great abundance of food, and a great quantity of arms, and other necessaries more than we want, we are openly deprived by God himself of all hope of deliverance; for that fire which was driven upon our enemies did not of its own accord turn back upon the wall which we had built; this was the effect of God's anger against us….[2]

Josephus describes the deaths of 960 men, women, and children.

Josephus's account has been disputed on several grounds. Some doubt that Jews would have agreed to commit suicide, which is forbidden in Jewish law. Others do not think that the archeological evidence supports Josephus. The bodies of 32 people have been found at the site, in some cisterns and in a cave, apparently hiding, which casts doubt on the claim that all the defenders died in the suicide pact. Others suggest that the speech he attributed to Elazar at Masada, encouraging suicide, is a type of literary “antilogos” to the speech against suicide which he has himself give, “at Jotapata under similar circumstances.”[3] Rather as Josephus himself survived the earlier suicide pact, Cohen suggests that what took place did not represent "unanimity of purpose and unity of action among the Sicarii in their final hours." What happened was probably much more haphazard with some Sicarii trying to hide and some taking their own lives.[4] However, it is equally doubtful that Josephus would have invented the entire story. He had no reason to do so. Thus, Cohen concluded:

that Josephus attempted to be reasonably accurate in matters which were verifiable by Silva and the Romans. He refrained from inventing glorious military actions for the Sicarii, and, we may assume, had some basis in fact for the ascription of murder-suicide to them. At least some of the Sicarii killed themselves rather than face the Romans. This fact was exaggerated and embellished.[5]

Cohen later suggests it likely that Josephus, in his efforts at apology for Jews and at rehabilitating their image in Roman eyes, "realized that the murder-suicide of some of the Sicarii at Masada would be far more dramatic and compelling if it became the murder-suicide of all the Sicarii" and so "sitting in his study in Rome" he "improved on his story."[6] 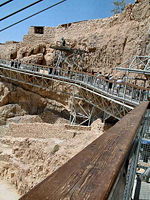 The site of Masada was identified in 1842 and extensively excavated in from 1963 to 1965 by an expedition led by Israeli archeologist Yigael Yadin. A pair of cable cars now carries those visitors who do not wish to climb the ancient Snake Path, now restored on the eastern side of the mountain (access via the Dead Sea road). The area remained largely untouched by humans or nature in the past two millennia, due to the location's remoteness from human habitation and its arid environment. The Roman ramp still stands on the western side and can be climbed on foot. Many of the ancient buildings were restored from their remnants, as were the wall-paintings of Herod's two main palaces, and the Roman-style bathhouses that he built. The synagogue, storehouses, and houses of the Jewish rebels were also found and restored. The meter-high circumvallation wall that the Romans built around Masada can be seen, together with 11 barracks for the Roman soldiers just outside this wall. Water cisterns two-thirds of the way up the cliff drain the nearby wadis by an elaborate water system, which explains how the rebels managed to have enough water for such a long time. Other excavation took place after the Six-Day War.

When Moshe Dayan was the Israel Defense Forces' Chief of Staff, troops finishing their basic training started to regularly participate in swearing-in ceremonies at Masada, where participants swear an oath that "Masada shall never fall again." Hundreds of soldiers climb at night in rows along the Snake Road and then swear in with torches lighting the background. This was customary for troops of the Israeli Armor Corps, the Givati Brigade, and others. Marches to Masada are still popular in the IDF and a requirement for many units such as Nahal.

The Masada legacy was used in a similar context by the British Mandate of Palestine, which conceived the Masada Plan to man defensive positions on Mount Carmel with Palmach fighters in order to stop Erwin Rommel’s expected drive through Palestine in 1942. The plan was abandoned following Rommel's defeat at El Alamein.

Masada has been a UNESCO World Heritage Site since 2001. An audio-visual light show is presented nightly on the western side of the mountain (access by car from the Arad road or by foot, down the mountain via the Roman ramp path).

Retrieved from https://www.newworldencyclopedia.org/p/index.php?title=Masada&oldid=1086208
Categories:
Hidden category:
This page was last edited on 7 November 2022, at 16:17.
Content is available under Creative Commons Attribution/Share-Alike License; additional terms may apply. See Terms of Use for details.