Zhang Binglin (December 25, 1868-June 14, 1936) was a Chinese philologist, textual critic and anti-Manchu revolutionary. His philological works include Wen Shi (文始 "The Origin of Writing"), the first systematic work of Chinese etymology. He developed a system of shorthands based on the seal script, called jiyin zimu (記音字母), later adopted as the basis of zhuyin. Though innovative in many ways, he was skeptical of new archaeological findings, regarding the oracle bones as forgery.

An activist as well as scholar, he produced a great amount of political works. Because of his outspoken character, he was jailed for three years by the Qing Empire and was put under house arrest for another three by Yuan Shikai. While in prison, Zhang Binglin studied Buddhism and enhanced his critical perspective to both Manchurian rule of Qin Dynasty and monarchy as a political system based upon Buddhist idea of equality of all.

Zhang Binglin opposed Western powers ruling over China. During late nineteenth century and early twentieth century, Zhang Binglin tried to establish a social, cultural, and spiritual identity of Chinese, which could counterbalance dominant influences of the West. Republic of China is the name he gave to a newly emerged Chinese nation after the overthrow of Qin Dynasty. 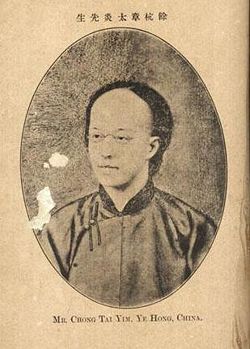 Zhang was born with the given name Xuecheng (學乘) in Yuhang (now a district in Hangzhou), Zhejiang province to a scholarly family, later chainging his given name to Jiang (絳) with the sobriquet Taiyan, to show his admiration for Gu Yanwu (Chinese: 顧炎武) (1613-1682), also known as Gu Tinglin (顧亭林), a Chinese philologist and geographer in the early Qing dynasty. When he was 23, he began to study under the great philologist Yu Yue (俞樾) (1821-1907), immersing himself in the Chinese classics for seven years.

After the first Sino-Japanese War, he came to Shanghai, becoming a member of the Society for National Strengthening (強學會) and writing for a number of newspapers, including Liang Qichao's Shi Wu Bao (時務報). In September 1898, after the failure of the Wuxu Reform, Zhang escaped to Taiwan with the help of a Japanese friend and worked as a reporter for Taiwan Riri Xinbao (台灣日日新報), writing for Qing Yi Bao (清議報)) produced in Japan by Liang Qichao.

In May of the following year, Zhang went to Japan and was introduced to Sun Yat-sen by Liang Qichao. He returned to China two months later to be a reporter for the Shanghai-based Yadong Shibao (亞東時報), and later published his most important political work, Qiu Shu (訄書).

In 1901, under the threat of arrest from the Qing Empire, Zhang taught at Soochow University for a year before he escaped to Japan for several months. Upon return, he was arrested and jailed for three years until June 1906. He began to study Buddhist scriptures during his time in jail.

In 1908, Min Bao, a newspaper, was banned by the Japanese government. This caused Zhang to focus on his philological research. He coined the phrase "Zhonghua Minguo" which（中華民國）eventually became the name of the Chinese Republic.

Because an ideological conflict with Sun Yat-sen and his Three Principles of the People, Zhang established the Tokyo branch of Guangfu Hui in February 1909. Guangfu Hui (光復會, "Revive the Light Society"), or the Restoration Society, was an anti-Qing Empire organization established by Cai Yuanpei in 1904.

After the Wuchang Uprising, Zhang returned to China to establish the Republic of China Alliance (中華民國聯合會) and chief-edit the Dagonghe Ribao (大共和日報).

After Yuan Shikai became the President of the Republic of China in 1913, Zhang was his high-ranking adviser for a few months until the assassination of Song Jiaoren. Song Jiaoren (Chinese: 宋教仁; pinyin: S®∞ng Ji®§or®¶n; Wade-Giles: Sung Chiao-jen) (April 5, 1882 ®C March 22, 1913) was a Chinese republican revolutionary, political leader and a founder of the Kuomintang (KMT). After criticizing Yuan for possible responsibility of the assassination, Zhang was put under house arrest, in Beijing's Longquan Temple, until Yuan's death in 1916. After release, Zhang was appointed Minister of the Guangzhou Generalissimo (大元帥府秘書長) in June 1917.

In 1924, Zhang left Kuomintang, entitling himself a loyalist to the Republic of China, he became critical of Chiang Kai-shek. Zhang established the National Studies Society (國學講習會) in Suzhou in 1934 and chief-edited the magazine Zhi Yan (制言).

He died two years later at 67 and was buried in a state funeral. In April 3, 1955, the People's Republic of China removed the coffin from Suzhou to Nanping Mountain, Hangzhou. The People's Republic established a museum devoted to him beside Xi Lake.

He had three daughters with his first wife. With Cai Yuanpei as witness, he married again in 1913, with Tang Guoli (湯國梨), an early Chinese feminist. They had two sons, Zhang Dao (章導) and Zhang Qi (章奇).

Zhang Binglin is known as a philologist, linguist, and a social, cultural, political philosophy theorist.

His philological works include Wen Shi (文始 "The Origin of Writing"), the first systematic work of Chinese etymology. He also made contributions to historical Chinese phonology, proposing that "the niang (娘)) and ri (日)) initials [in Middle Chinese] come from the ni (泥)) initial [in Old Chinese]" (known as niang ri gui ni 娘日歸泥).

Zhang Binglin was one of key figures for Xinhai Revolution together with Sun Yat-sen and Huang Xing, which led Qing Dynasty to the end, and the rise of a new state which Zhang Binglin named Republic of China (ROC).

Zhang Binglin tried to clarify social, historical, cultural, and spiritual identity of China and her people by the studies of philology, phonology, Confucianism and Buddhist philosophy. His theory gave a theoretical basis for Chinese to establish their identity against the Western powers in the late nineteenth century and early twentieth century.

When Zhang Binglin criticized Qing Dynasty, he criticized not only Manchurian rule, but monarchy itself. Zhang Binglin adopted concepts in Buddhism such as equality among people as a theoretical foundation, showing a sharp contrast with Kang Youwei, who supported Monarchy and idealized Confucianism.

Zhang Binglin is remembered as a scholar of philology, a revolutionary, and a patriotic thinker who contributed to the modernization of China.

Retrieved from https://www.newworldencyclopedia.org/p/index.php?title=Zhang_Binglin&oldid=1044019
Categories:
Hidden category:
This page was last edited on 16 October 2020, at 17:25.
Content is available under Creative Commons Attribution/Share-Alike License; additional terms may apply. See Terms of Use for details.