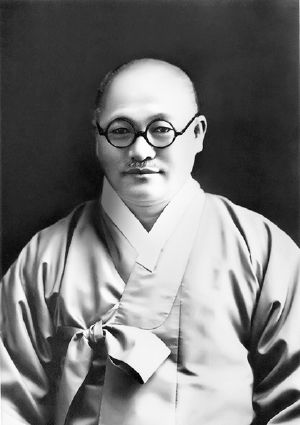 Won Buddhism, Wonbulgyo, a compound of the Korean won (circle) and bulgyo (Buddhism), means literally Circular Buddhism, or Consummate Buddhism. It is the name of an indigenous religion founded in Korea in the twentieth century. Instead of a statue or painting of Buddha figures, believers meditate before a won, or circle. During different stages in Korean history leading up to the to the twentieth century, Buddhism and Confucianism took turns as Korea's leading ideology. Won Buddhism seeks a way to synthesize some of the conflicting teachings of Buddhism and Confucianism.

Pak Chung-bin (1891-1943; Great Master Sotaesan) attained great enlightenment in 1916 and had a precognition of the world entering an era of advancing material civilization, to which humans would be enslaved. The only way to save the world was by expanding spiritual power through faith in genuine religion and training in sound morality. With the dual aims to save sentient beings and cure the world of moral ills, Sotaesan began his religious mission. He opened a new religious order with the buddhadharma as the central doctrine, establishing the Society of the Study of the Buddha-dharma at Iksan North Cholla province, in 1924. He edified his followers with newly drafted doctrine until his death in 1943. The central doctrine was published in the Pulgyo cheongjeon (The Correct Canon of Buddhism) in 1943.

The central doctrine lies in the tenets of Ilwonsang, which states that Ilwon (one circle), the Wŏnbulgyo name for the Dharmakāya Buddha, is the source of all sentient and non sentient beings in the universe, the original nature of all buddhas and patriarchs, and the Buddha-nature of all sentient beings. Won Buddhist faith begins with a belief in Ilwonsang as an all encompassing source and center, where there is no distinction between great and small, between self and other, between void and being. Just like a finger pointing at the moon, Ilwonsang, enshrined as the symbol of the dharmakaya of the Buddha, refers to the Buddha-nature of the Tathāgatha and the fundamental source of one's life. The worship of Ilwon lies in acknowledging our indebtedness to the Fourfold Grace The Fourfold Grace, signifying our indebtedness to elements in the universe:

The Threefold Study is carried out through timeless Zen, which holds as its central principle that when the six sense organs are at rest, one should nourish One Mind by clearing the mind of worldly thoughts; when they are at work, one should forsake injustice and cultivate justice.

Traditional Buddhist paths to enlightenment often involve withdrawal from the world, living in a monastery and many hours each day spent in meditation. This model for religious mastery came into strong conflict with some of the most basic teachings of Confucianism. To be a good Confucianist, it is centrally important to care for one's parents. This is very difficult if one has withdrawn from society into isolation and meditation. This is the kind of idealogical conflict that Won Buddhism addresses, trying to provide an appropriate balance between spiritual life and material life. This balance can be expressed in many aspects:

Won Buddhism has a network of about 350 temples in Korea, organized in 16 districts. In contrast to traditional Seon and Hwaeom Temples, Won Temples are located in cities so that people can visit them easily, to pray, to hold memorial services, to find peace, to attend Dharma services, and to meditate. There are also 50 Won Buddhist temples in Europe, Asia, Africa and North & South America and 20 Won Buddhist-affiliated middle schools, high schools and colleges, including a graduate school in the United States.

There are five major holy places revered by Won Buddhists:

Retrieved from https://www.newworldencyclopedia.org/p/index.php?title=Won_Buddhism&oldid=1089360
Categories:
Hidden category:
This page was last edited on 25 November 2022, at 22:28.
Content is available under Creative Commons Attribution/Share-Alike License; additional terms may apply. See Terms of Use for details.