William III of the Netherlands 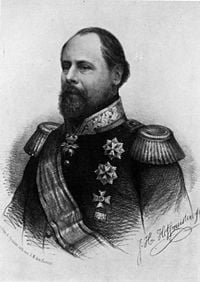 William III of the Netherlands

William III (Willem Alexander Paul Frederik Lodewijk van Oranje-Nassau; anglicized: William Alexander Paul Frederick Louis of Orange-Nassau) (February 19, 1817 – November 23, 1890) was from 1849 King of the Netherlands and Grand Duke of Luxembourg until his death and the Duke of Limburg until the abolition of the Duchy in 1866. He was opposed to the constitutional changes of 1848, which transformed the nation into a parliamentary democracy effectively making the monarch's role ceremonial and advisory. Never content with this role, he constantly tried to intervene politically. On the other hand, he remained generally popular as Holland prospered economically, developed new transport and communication infrastructure. The Dutch people preferred stability and continuity of governance rather than revolution, and shrugged off the king's behavior which at no time endangered the nation's security or its people's quality of life. He was also somewhat preoccupied with the military in a nation that was rather indifferent towards this institution.[1]

He was succeeded by his daughter, Wilhelmina of the Netherlands who was in her turn succeeded by her daughter, Juliana whose daughter, Beatrix became the third regnant Queen of Holland in succession. Perhaps being these women's ancestor was William's most valuable contribution to his nation. Not only have these women refrained from political interference but they have personified the values of the Dutch people, who have increasingly positioned Holland in the forefront of peace-keeping, international development and as champions of European unity as a mechanism to end war and ensure that all in the European space enjoy freedom, civil rights and a reasonable living standard.

William was born in Brussels as son of William II of the Netherlands and Queen Anna Paulowna, daughter of Tsar Paul I of all the Russians and Empress Maria Fyodorovna. In his early years, he served in the military.

He married his first cousin, Sophie, daughter of King William I of Württemberg and Grand Duchess Catherine Pavlovna of Russia, in 1839. This marriage was unhappy and was characterized by struggles about their children. Sophie was a liberal intellectual, hating everything leaning toward dictatorship, such as the army. William was simpler, more conservative, and loved the military. He prohibited intellectual exercise at home, for which action Queen Victoria of the United Kingdom, who corresponded with Sophie, called him an uneducated farmer. (His extramarital enthusiasms, however, led the New York Times to call him "the greatest debauchee of the age".) Another cause of marital tension (and later political tension) was his capriciousness; he could rage against someone one day, and be extremely polite the next.

William loathed the 1848 constitutional changes initiated by his father (William II) and Johan Rudolf Thorbecke which "gave more power to the middle classes and made the government's ministers responsible to the Estates General and not to the King."[2] William II and Sophie saw them as key to the monarchy's survival in changing times. William himself saw them as useless limitations of royal power, and wished to govern like his grandfather, William I.

He tried to relinquish his right to the throne to his younger brother Prince Henry of the Netherlands, asking that "news of his abdication be made public."[2] His mother convinced him to cancel this action. The constitutional changes transformed Holland into a democratic constitutional monarchy "peacefully" at a time when "more violent revolution was sweeping through many European countries."[2] One year later (1849) William became King upon the death of his father. Constitutional changes included "direct elections to the Second Chamber and Municipal Councils by those who paid a certain amount of taxes" and "introduction of the right of the Estates General to question ministers."[3]

King William III repeatedly contemplated abdicating as soon as his eldest son William, Prince of Orange turned eighteen. This occurred in 1858, but as William was uncomfortable making a decision he remained King. His first act was the inauguration of the parliamentary cabinet of Thorbecke, the liberal designer of the 1848 constitution, whom William loathed.

Silver 2½ Guilder Coin of William III, struck in 1857. The obverse Dutch inscription is WILLEM III KONING DER NED[ERLANDEN] G[ROOT] H[ERTOG] V[AN] LUXEMBURG or in English, "William III, King of the Netherlands and Grand Duke of Luxembourg." The reverse Dutch inscription is MUNT VAN HET KONINGRYK DER NEDERLANDEN, or in English, "Currency of the Kingdom of the Netherlands."

In 1849, William announced his intention, in honor of his father's memory, to "look after the army's needs and interests." However, parliament now controlled the purse strings and that very year a cost-cutting exercise led to a reduction in the number of soldiers. Hooker comments that the Dutch people have a history of "aversion to the military" and that "reductions in the military are popular with the public."[4]

When the Roman Catholic hierarchy of bishops was restored in 1853 a popular petition signed by 250,000 people opposed to restoration of the hierarchy was submitted to William, who expressed his sympathy with their opposition. Thorbecke resigned in protest. He then led the opposition until 1862, when William asked him to form a new government.[3] This term of Thorbecke premiership saw the abolition of slavery in the Dutch East Indies but when he tried to the system of "forced labour" used in Java members of his own party joined with the opposition and the bill failed to attract enough support. In 1957, William signed an Education bill that made it a duty for schools to instill "pupils with Christian and social virtues." The Act also denied any state aid to church-related schools.[5]

In the first two decades of William's reign, he dismissed several cabinets and disbanded the States-General several times, installing royal cabinets which ruled briefly as there was no support in elected parliament. Between the first and second Thorbecke government there were six Prime Ministers, at least two of whom were in office for very short periods: Jacob van Zuylen van Nijevelt from March 14, 1861 to November 10 and his successor, Schelto van Heemstra from November 10, 1961 until February 1, 1862. In "both 1866 and 1867 he personally intervened in the elections and in the disputes between parliament and the cabinet, with the purpose of keeping his cabinet in place." He even appealed "directly to the electorate with a manifesto printed in the national colors."[6]

He tried to sell the Grand Duchy of Luxembourg in 1867. The attempt nearly caused a war between Prussia and France, and helped make Luxembourg a fully-independent country.

The King was popular with the ordinary people, presenting himself as a cordial man. This was a prosperous time for the nations as maritime trade was "rejuvenated" and government spending was reduced.[3] New canals were built and there was a "concerted effort" to extend the railroad system.[6]

In 1877, Queen Sophie died and years of war in the palace came to an end. In 1879, King William decided to marry Princess Emma of Waldeck and Pyrmont, a small German principality. Some politicians were quite angry, as she was 41 years the king's junior. Emma showed herself, however, as a cordial woman; and when William asked permission from parliament, this was easily granted and the couple was quickly married. She was not his first choice. He had previously been rejected by her sister, Princess Pauline of Waldeck and Pyrmont, as well as Princess Thyra of Denmark, a sister of England's Princess of Wales (later Queen Alexandra) and of Empress Maria Feodorovna of Russia.

Emma had a relieving influence on William's capricious personality and the marriage was extremely happy. The last decade was without any doubt the best of his reign. In 1880, Wilhelmina was born. She became heiress in 1884 after the death of the last remaining son from William's first marriage. Many potential heirs had died between 1878 and 1884.

King William became seriously ill in 1887. He died in 1890. Because Wilhelmina had not yet reached adulthood, Emma became Queen-Regent for her daughter. She would remain Queen-Regent until Wilhelmina's eighteenth birthday in 1898. Because the Luxembourg Grand Duchy could only be inherited through the male line at the time, under Salic law, it went to Adolphe, Grand Duke of Luxembourg, the former Duke of Nassau. His daughter, granddaughter and great-granddaughter would reign successively so that Holland had a female Head of State throughout the next century and into the twenty-first century.

William III was never happy with his role as a constitutional monarch and endangered the monarchy itself with his constant political interference which "created tensions in Dutch public life."[7] His daughter was more content with her constitutional role, advising from behind the scenes, as did her own daughter. The Dutch monarch has a constitutional role to advise the government, chairing the Council of State. This body must be consulted before a bill is presented to Parliament. Perhaps William's greatest contribution to his people was as father, grandfather and great-grandfather of their next three female monarchs. These women came to represent the values and ideals of the Dutch people and led them through two World Wars, as well as the dismantling of the Dutch colonial empire. Blom writes that both Wilhelmina and Juliana "in different ways - knew how to embody the unity of the Dutch nation."[8] Less interested in the military or in exercising political power, they gave moral leadership to their nation at a time when it was evolving a new role in the world. Dutch neutrality in World War I and resistance to Third Reich occupation in World War II has informed its commitment to global peace-keeping, to defending human rights and to the European Union as a framework for ending war by ensuring that all Europe's citizens are treated with equity and enjoy a reasonable living standard.

Retrieved from https://www.newworldencyclopedia.org/p/index.php?title=William_III_of_the_Netherlands&oldid=822643
Categories:
Hidden category:
This page was last edited on 5 October 2008, at 19:08.
Content is available under Creative Commons Attribution/Share-Alike License; additional terms may apply. See Terms of Use for details.