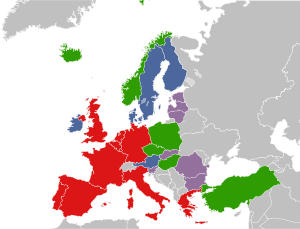 The Western European Union (WEU) is a partially dormant European defense and security organization, established on the basis of the Treaty of Brussels of 1948, with the accession of West Germany and Italy in 1954. Between 1948 and 1954 it was known as the Brussels Treaty Organization. It should not be confused with the European Union (EU). The WEU headquarters are in Brussels. With other post-World War II institutions such as the Council of Europe and the European Coal and Steel Community which evolved into the European Union, the Western European Union aimed to promote the integration of the European space and to make aggression a relic of history. As an alliance, its role has been overshadowed by the North Atlantic Treaty Organization which links European security with North American. However, in 1995, the Union established a Rapid Reaction Force to respond to crises.

As a defense alliance, the Western Union rejects aggression as a way for states to resolve disputes. With the United Nations, to whose Charter the founding Treaty refers, the Union regards war as the last resort and wishes to see the "scourge of war" banished for all time. With the ending of the Cold War, the role of the Union has changed. It sees itself less as a Union needed to defend Europe than as it does as a humanitarian, peacekeeping and peacemaking response system. Behind the founding vision of what some have called the "new Europe" was the idea that the energy and resources invested by past generations in preparing for and prosecuting war ought to be transferred to peace-making. As the human race matures, smelting weapons of war into agricultural tools, neither teaching nor learning war any more, even the Western European Union's current three tasks, agreed in 1992, may become redundant.

The Treaty of Brussels was signed by the United Kingdom, France, Belgium, Luxembourg, and the Netherlands on March 17 1948.[1] It was a mutual intergovernmental self defense treaty which also promoted economic, cultural and social collaboration. As a result of the failure of the European Defense Community on October 23, 1954, the WEU was established by the Paris Agreements with the incorporation of the then West Germany and Italy. The signatories of the Paris Agreements clearly stated their three main objectives in the preamble to the modified Brussels Treaty:

The defense efforts resulting from the Brussels Treaty took form as the Brussells Treaty Organization.[2] The Treaty made explicit commitments to human rights, democracy, personal freedoms and political liberty and also aimed to aid the process of post-War "economic recovery." The opening paragraphs also express commitment to the Charter of the United Nations.

The Brussels Pact had cultural and social clauses, concepts for the setting up of a "Consultative Council." The basis for this was that a cooperation between Western nations would help stop the spread of Communism, thus the Union's origin also lies in the Cold War context. The Treaty of Brussels was amended by the Protocol signed in Paris at the conclusion of the London and Paris Conferences on October 23, 1954, which added West Germany and Italy to the Union. On this occasion it was renamed the Western European Union.

The WEU is led by a Council of Ministers, assisted by a Permanent Representatives Council on ambassadorial level. Social and cultural aspects of the Brussels Treaty were handed to the Council of Europe to avoid duplication of responsibilities within Europe.

On May 15, 1995, the Council of Ministers of the WEU met in Lisbon. Declaration of Eurofor's (European Operational Rapid Force) creation was made by France, Italy, Spain and Portugal. Eurofor became operational in June 1998, as a task force of the Western European Union. The force is intended to be able to respond at short notice to crises, such as those that occurred in Kosovo.

Western European Armaments Organization (WEAO) was intended as an Armaments Agency but operations were limited to a research cell. It provided support services in defense research and technology. It was created in 1996, and closed in August 2006.

A large part of the work of these two agencies has now been taken over by the European Defense Agency.

At the Petersberg Talks in 1992, it was agreed that EEU unites might be deployed for: however that situation is changing. The Petersburg Tasks were agreed at a meeting in Petesberg, Germany in 1992. They are

Examples of the WEU carrying out such function include monitoring the embargo in the former Republic of Yugoslavia in 1993, assisting the UN with enforcing sanction on the Danube, also in 1993. From 1994 to 1996 the WEU stationed a police contingent in Mostar, Bosnia and in 1997 it sent a mission to Albania.[6]

The WEA had taken second place to NATO, with which it shares many aims. However, NATO expressed trans-Atlantic solidarity while the WEA was intended to promote European integration. These two are not always compatible, as Rees and Cahen discuss in their books. On the other hand, the WEU represented what Phelan describes as the "European pillar of NATO" and as such can deal with crises "in which the North Americans would not wish to become directly involved."[6] Under the Amsterdam Treaty, the WEU was given an integral role in giving the EU an independent defense capability.[7] On November 13, 2000, WEU Ministers met in Marseille and agreed to begin transferring the organization's capabilities and functions to the European Union, under its developing Common Foreign and Security Policy (CFSP) and European Security and Defense Policy (ESDP).

For example, on January 1, 2002, the WEU's Security Studies Institute and the Satellite Centre were transferred to the EU and became the European Union Institute for Security Studies and the European Union Satellite Centre. Notably, the role given to the WEU in the Amsterdam Treaty, was removed by the Nice Treaty and the European Constitution gives the role of collective defense to NATO. However the defense commitment, of Article 4 of the Brussels Treaty, has not been subsumed. Article 42(7) of the Treaty of the European Union, once amended by the Treaty of Lisbon, could be viewed as incorporating that defense commitment into the EU framework.[8]

A summary of some of the moves towards a merger of the WEU into the EU;

With the transfer of responsibilities, the WEU's Parliamentary assembly was urged to dissolve itself, as it had a mandate to supervise WEU politics, not the EU's ESDP politics. But the Assembly saw itself as playing an important role, particularly with greater right of scrutiny, membership, experience and expertise in defense policy. Therefore, it renamed itself the "Interim European Security and Defense Assembly" and urged the European Convention to include it as a second chamber within the EU's institutional framework. Hence it argued it could effectively scrutinize the ESDP, help improve EU-NATO relations and be more suited, being composed of national parliamentarians, to the intergovernmental style of the ESDP.

However with the European Constitution aiming to streamline and simplify the EU's foreign policy, for example combining the two main foreign policy posts, it was not seen as wise to then create a separate double legislature for the CFSP, instead, the European Parliament was granted greater scrutiny over foreign policy.

The full merger of WEU into the EU is not yet achieved, or even certain. Even though functions such as crisis-management now fall under the EU, wider membership could mean it continues to exist in some form for a while. Jolyon Howorth's book, Defending Europe, paints the situation as a "revival of the WEU" rather than a shutting down of it.<rer>Howarth, 5.</ref> Whatever shape the Union's future takes or whether its tasks are transferred to the EU, these tasks are likely to remain in sympathy with the three defined at Petersburg, that is, humanitarian, peacekeeping and peacemaking. The emphasis is less on "defense" than on taking the initiative in peacekeeping and peacemaking.

Retrieved from https://www.newworldencyclopedia.org/p/index.php?title=Western_European_Union&oldid=1041073
Categories:
Hidden category:
This page was last edited on 21 August 2020, at 13:01.
Content is available under Creative Commons Attribution/Share-Alike License; additional terms may apply. See Terms of Use for details.