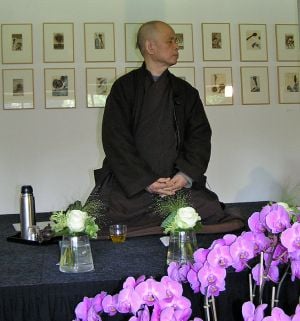 Thich Nhat Hanh, (October 11, 1926 - January 22, 2022) was a Vietnamese Zen Buddhist monk, author, poet, and peace activist. He was said to be the second "best known Buddhist teacher" in the world today, after the Dalai Lama.[1]

He joined a Zen monastery at the age of 16 and was fully ordained as a Zen monk in 1949. During the Vietnam War, he founded a grassroots relief organization that rebuilt bombed villages, set up schools and medical centers, and resettled families left homeless. He traveled to the U.S. a number of times to study at Princeton University, and later lecture at Cornell University and teach at Columbia University. His main goal of those travels, however, was to urge the U.S. government to withdraw from Vietnam. He urged Martin Luther King, Jr. to oppose the Vietnam War publicly, and spoke with many people and groups about peace. In a January 25, 1967, letter to the Nobel Institute in Norway, King nominated him for the Nobel Peace Prize.[2]

After the Vietnam War, he was active in the peace movement and urged warring countries, races, and peoples to stop fighting and look for non-violent solutions to problems.

In addition to his peaceful social activism, Thich Nhat Hanh was also instrumental in bringing Buddhism to the West, and engaging in Interreligious dialogue. He is also credited with coining the term "Engaged Buddhism" in his book, Vietnam: Lotus in a Sea of Fire.[3]

Thich Nhat Hanh was born Nguyễn Xuân Bảo in Thừa Thiên (Central Vietnam) in 1926. At the age of 16 he entered the monastery at Từ Hiếu Temple near Huế, Vietnam, where his primary teacher was Dhyana (meditation; Zen) Master Thanh Quý Chân Thật.[4] A graduate of Bao Quoc Buddhist Academy in Central Vietnam,[3] Thich Nhat Hanh received training in Zen (in Vietnamese: Thiền) and the Mahayana school of Buddhism and was ordained as a monk in 1949. Thich Nhat Hanh was recognized as a Dharmacharya and as the spiritual head of the Từ Hiếu Temple and associated monasteries. On May 1, 1966 at Từ Hiếu Temple, Thich Nhat Hanh received the “lamp transmission,” making him a Dharmacharya or Dharma Teacher, from Master Chân Thật.[4] Thich Nhat Hanh combined his deep knowledge of a variety of traditional Zen teachings with methods from Theravada Buddhism, insights from Mahayana Buddhism, and ideas from Western psychology to form his approach to modern meditation practice.

In 1956, he was named Editor-in-Chief of Vietnamese Buddhism, the periodical of the Unified Vietnam Buddhist Association (Giáo Hội Phật Giáo Việt Nam Thống Nhất). In the following years he founded Lá Bối Press, the Van Hanh Buddhist University in Saigon, and the School of Youth for Social Service (SYSS), a neutral corps of Buddhist peaceworkers who went into rural areas to establish schools, build healthcare clinics, and help re-build villages.

Van Hanh Buddhist University became a prestigious private university that focused on Buddhist studies, Vietnamese culture, and languages. Nhat Hanh taught Buddhist psychology and Prajnaparamita literature. At a meeting in April 1965, Van Hanh Union students issued a Call for Peace statement. Its main theme was: "It is time for North and South Vietnam to find a way to stop the war and help all Vietnamese people live peacefully and with mutual respect." When Thich Nhat Hanh left for the U.S. shortly afterwards, control over Van Hanh University was taken over by one of the Chancellors who wished to sever ties with Thich Nhat Hanh and the SYSS, calling Sister Chan Khong, who was left in control of the organization, a "communist." From that point, the SYSS struggled to raise funds and endured a number of attacks on its members, many of whom were threatened, harassed, and murdered. The SYSS persisted in their efforts, refusing to take sides in the conflict and continuing to provide aid to people in need.[3]

Thich Nhat Hanh was a leader in the Engaged Buddhism movement and he is credited with bringing the idea to the West. He credits the thirteenth-century Vietnamese King Tran Nhan Tong with the origination of the concept. Tran Nhan Tong abdicated his throne to become a monk, and founded the still dominant Vietnamese Buddhist school, the Bamboo Forest tradition.[5]

In 1960, Thich Nhat Hanh went to the U.S. to study comparative religion at Princeton University, and he was subsequently appointed lecturer in Buddhism at Columbia University. By then, he had gained fluency in French, Chinese, Sanskrit, Pali, Japanese, and English, in addition to his native Vietnamese. In 1963, he returned to Vietnam to aid his fellow monks in their non-violent peace efforts.

Thich Nhat Hanh returned to the U.S. in 1966, to lead a symposium in Vietnamese Buddhism at Cornell University and to continue his work for peace. Thich Nhat Hanh had written a letter to Martin Luther King, Jr. in 1965 entitled: “Searching for the Enemy of Man” and it was during his 1966 stay in the U.S. that Thich Nhat Hanh met with King and urged him to publicly denounce the Vietnam War.[6]

Dr. King gave his famous speech at the Riverside Church in New York City in 1967,[7] his first to publicly question the U.S. involvement in Vietnam. Later that year, Dr. King nominated Thich Nhat Hanh for the 1967 Nobel Peace Prize. In his nomination Rev. King said, "I do not personally know of anyone more worthy of [this prize] than this gentle monk from Vietnam. His ideas for peace, if applied, would build a monument to ecumenism, to world brotherhood, to humanity." (Despite King's high praise, the committee decided not to make an award that year. King's revelation of his nomination was a violation of tradition and the explicit "strong request" of the prize committee.)[2]

In 1969, Thich Nhat Hanh was the representative for the Buddhist Peace Delegation at the Paris Peace talks. When the Paris Peace Accords were signed in 1973, the Vietnamese government denied Thich Nhat Hanh permission to return to Vietnam, and he went into exile in France. From 1976 through 1977, he led efforts to help rescue Vietnamese boat people in the Gulf of Siam, but was forced to stop because of the hostility of the governments of Thailand and Singapore.[8] In 1969, Thich Nhat Hanh established the Unified Buddhist Church (Église Bouddhique Unifiée) in France (not a part of the Unified Buddhist Church of Vietnam). 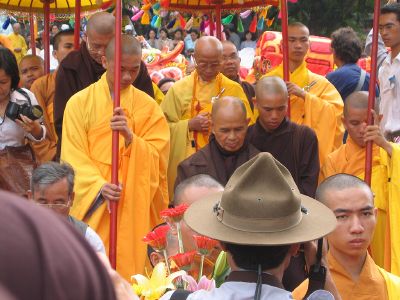 From January 12 until April 11, 2005, Thich Nhat Hanh returned to Vietnam after a series of negotiations that allowed him to teach, have select titles of his books published in Vietnamese, and allowed 100 monastic and 90 lay members of his Order to accompany him in his travels around the country, including a return to his root temple, Tu Hieu Temple in Hue.[8] 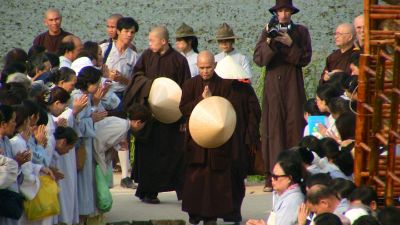 The trip was not without controversy. Thich Vien Dinh writing on behalf of the Unified Buddhist Church of Vietnam (considered illegal by the Vietnamese government) called for Thich Nhat Hanh to make a statement against the Vietnam government’s poor record on religious freedom. Thich Vien Dinh feared that the trip would be used as propaganda by the Vietnamese government, making the world believe that the issues of religious freedom are improving there, while abuses continue.[9][10]

Nhat Hanh returned to Vietnam in 2007 despite continued controversy over his return and the continued house arrest of two top officials of the government-banned Unified Buddhist Church of Vietnam.[11] The three goals of his 2007 trip back to Vietnam were to support new monastics in his Order, organize and conduct "Great Chanting Ceremonies" intended to help heal remaining wounds from the Vietnam war, and to lead retreats for monastics and lay people.[8] The chanting ceremonies were originally called "Grand Requiem for Praying Equally for All to Untie the Knots of Unjust Suffering," but Vietnamese officials objected, saying it was improper to "equally" pray for soldiers in the South Vietnamese army or U.S. soldiers. Nhat Hanh agreed to change the name to "Grand Requiem For Praying."[11]

In November 2014, Nhất Hạnh experienced a severe brain hemorrhage and was hospitalized.[12][13] After months of rehabilitation, he was released from the stroke rehabilitation clinic at Bordeaux Segalen University, in France. On July 11, 2015, he flew to San Francisco to speed his recovery with an aggressive rehabilitation program at UCSF Medical Center.[14] He returned to France on January 8, 2016.[15]

After spending 2016 in France, Nhất Hạnh traveled to Thai Plum Village. He continued to see both Eastern and Western specialists while in Thailand, but was unable to speak.[16]

On November 2, 2018, a press release from the Plum Village community confirmed that Nhất Hạnh, then aged 92, had returned to Vietnam a final time and would live at Từ Hiếu Temple, near Huế, for "his remaining days." [17] In a meeting with senior disciples, he had "clearly communicated his wish to return to Vietnam using gestures, nodding and shaking his head in response to questions."[17] A representative of Plum Village, Sister True Dedication, has described his life in Vietnam (referring to him as "Thầy" which is Vietnamese for "Teacher"):

Thầy's health has been remarkably stable, and he is continuing to receive Eastern treatment and acupuncture," wrote Plum Village representative Sister True Dedication in an email. "When there's a break in the rains, Thay comes outside to enjoy visiting the Root Temple's ponds and stupas, in his wheelchair, joined by his disciples. Many practitioners, lay and monastic, are coming to visit Tu Hieu, and there is a beautiful, light atmosphere of serenity and peace, as the community enjoys practicing together there in Thay's presence.[18]

The Order of Interbeing 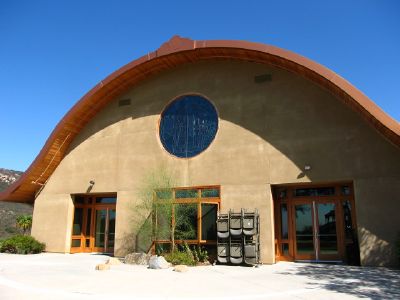 In 1975, he formed the Sweet Potatoes Meditation Center. The center grew and in 1982 he and his colleague Sister Chân Không founded Plum Village Buddhist Center (Làng Mai), a monastery and Practice Center in the Dordogne in the south of France. Since the mid 1960s he has headed a monastic and lay group, the Order of Inter-Being, teaching the Five and Fourteen Mindfulness Trainings and "Engaged Buddhism." The Unified Buddhist Church is the legally recognized governing body for Plum Village (Làng Mai) in France, for Blue Cliff Monastery in Pine Bush, New York, the Community of Mindful Living, Parallax Press, Deer Park Monastery in California, and the Magnolia Village in Mississippi.

There are now two monasteries in Vietnam, at the original Từ Hiếu Temple near Huế and at Prajna Temple in the central highlands. Thich Nhat Hanh and the Order of Interbeing have established monasteries and Dharma centers in the United States at Deer Park Monastery (Tu Viện Lộc Uyển) in Escondido, California, Maple Forest Monastery (Tu Viện Rừng Phong) and Green Mountain Dharma Center (Ðạo Tràng Thanh Sơn) in Vermont both of which closed in 2007 and moved to the Blue Cliff Monastery in Pine Bush, New York, and Magnolia Village Practice Center (Đạo Tràng Mộc Lan) in Mississippi. These monasteries are open to the public during much of the year and provide on-going retreats for lay people. The Order of Interbeing also holds focused retreats for groups of lay people, such as families, teenagers, veterans,[20] and law enforcement officers.[21]

Retrieved from https://www.newworldencyclopedia.org/p/index.php?title=Thich_Nhat_Hanh&oldid=1063735
Categories:
Hidden category:
This page was last edited on 27 January 2022, at 00:58.
Content is available under Creative Commons Attribution/Share-Alike License; additional terms may apply. See Terms of Use for details.