The Secret of the Golden Flower

From New World Encyclopedia
Jump to:navigation, search
Previous (The Salvation Army)
Next (The Song of Roland)

The Secret of the Golden Flower ("Tai Yi Jin Hua Zong Zhi",《太乙金華宗旨》), is one of the most important Daoist classics, attributed to the famous Chinese immortal Lü Dongbin (798 C.E. - ?) who is believed to have lived on earth for more than 800 years. Passed on as an oral tradition for centuries, it was written down on wooden tablets during the Song dynasty by a student of Lü Dongbin, Wang Chongyang (1113 – 1170). It is one of the few Daoist classics that documents the Daoist orthodox “pre-heavenly” approach to cultivating the “golden elixir” (jin-dan, the elixir of life or immortality) that was predominant before the Song dynasty. Largely ignored by Chinese scholars, it became famous in the West when it was translated into German as "Das Geheimnis der Goldenen Blüte: ein chinesisches Lebensbuch” by Richard Wilhelm (1873 – 1930), a scholar of Chinese classical philosophy. The book was then translated into English and several other languages, and a new English translation was produced in 1991 by Thomas Cleary.

“The Secret of the Golden Flower” is an esoteric guide to Daoist meditation techniques, using poetic imagery that informs and confirms the experiences of meditation practitioners according to their own predispositions. The guide describes milestones that mark progress in the course of meditation practice, and the phenomenon that may be observed at each stage of development. The “golden flower” refers to a bright image, or mandala, that the practitioner will see in front of the mid-point between his or her eyes after developing the practice of meditation. Daoists believe this bright image is closely related to the "Original Essence," "Golden Flower," or "Original Light,” and is a sign that the practitioner is entering the first level of the immortal essence. 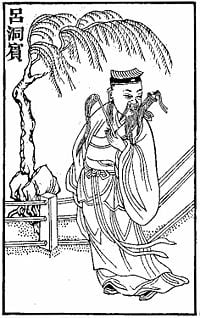 Lü Dongbin of the Eight Immortals

The Secret of the Golden Flower is one of the few Daoist classics, along with the "Tao Teh Ching," "Guan Yinzi" (or "Wenshi Zhenjing"), and the "Jade Emperor Heart Seal Sutra" (Yuhuang Xinyin Jing), that documents the Daoist orthodox “pre-heavenly” approach to cultivating the “golden elixir” (jin-dan), the elixir of life or immortality. This approach, which emphasized the cultivation of “pre-heavenly” or “external” chi acquired from the physical parents at conception, was popular before the Song dynasty. After the Song dynasty, most Daoist schools emphasized the cultivation of “internal” or “post-heavenly” chi, acquired after birth through nourishment, meditation and esoteric practices.[1]

The Secret of the Golden Flower was largely neglected by Chinese scholars because of the relative unpopularity of the “pre-heavenly” approach, and perhaps because Chinese scholars found discrepancies between the theory in this work and other works of Lu Dongbin. It became famous in the West when it was translated into German as "Das Geheimnis der Goldenen Blüte: ein chinesisches Lebensbuch” by Richard Wilhelm, published in 1929. It was translated into English in 1931 as "The Secret of the Golden Flower,” and was later translated into Japanese and other languages.[2] Thomas Cleary, a modern scholar of Eastern studies, produced a new English translation in 1991. 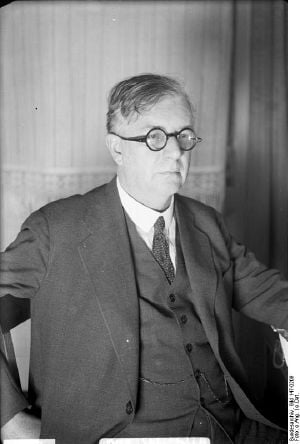 According to Carl Jung, who wrote an introduction and commentary to "Das Geheimnis der Goldenen Blüte: ein chinesisches Lebensbuch,” Richard Wilhelm (May 10, 1873 - March 2, 1930) was introduced to the work in China by his teacher of Chinese classical philosophy, a sage named Lau Nai Suan [3]. Conveying impressions received from his Chinese teacher, Wilhelm's work portrays the more intuitive aspects of The Secret of the Golden Flower. His translations from Chinese to German were later translated to English by Cary F. Baynes.

Thomas Cleary produced a more rational and scholarly English translation in 1991, and took several opportunities to criticize the validity of Wilhelm's translation. There are significant differences between the Wilhelm and Cleary translations.

The vast differences between ancient Chinese philosophy and modern Western rational thought make it difficult for a novice to grasp the meaning of the book without reading it several times. The poetic lines communicate an imagery that informs and confirms the experiences of meditation practitioners according to their own predispositions. The ideas and perceptions conveyed in the book are better understood with the imagination than with logical reason; in time, with reflection and practice, imagery and reason converge in an informative manner.

"Gathering the light"—an illustration of the first stage of meditation

“The Secret of the Golden Flower” focuses on techniques of meditation practice rather than on theory. Though the interpretations and opinions of Wilhelm, Jung and Cleary vary, the meditation technique described by The Secret of the Golden Flower is a straightforward, silent technique (the book's description of meditation has been characterized as 'Zen with details'). The meditation technique, set forth in poetic language, is practiced by sitting, breathing and contemplating. “Sitting” relates to maintaining a straight posture. Breathing is described in detail, primarily in terms of the esoteric physiology of the path of qi (also known as chi or ki), or breath energy. The energy path associated with breathing has been described as resembling an internal wheel vertically aligned with the spine. When breathing is steady, the wheel turns forward, with breath energy rising in back and descending in front. Bad breathing habits (or bad posture, or even bad thoughts) can cause the wheel not to turn, or move backward, inhibiting the circulation of essential breath energy. In contemplation, the practitioner watches thoughts as they arise and recede. 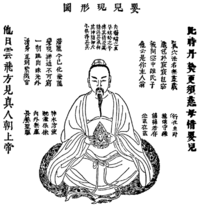 A minimum of 15 minutes of meditation practice per day is recommended. After one hundred days, a novice should begin to get a feel for the method. The meditation technique is supplemented by descriptions of milestones that mark progress in the course of meditation practice, and the phenomenon that may be observed at each stage, such as a feeling of lightness, like floating upward. These benefits are ascribed to an improved flow of internal energy associated with breath energy circulation, and the elimination of previously existing impediments.

Several drawings portray imagery relevant to the personal evolution of a meditation practitioner. The first such illustration represents the first one hundred days, or “gathering the light.” Stage 2 represents an emergence of meditative consciousness. Stage 3 is characterized by a meditative awareness that exists even in mundane, daily life. Stage 4 represents a higher meditative perception, where all conditions are recognized. Then, various conditions are portrayed as separate perceptions that are all part of a complete awareness.

In Wilhelm's translation, his Chinese teacher explained that after developing the practice of meditation, the practitioner will see a bright image in front of the mid-point between his or her eyes. This image, called mandala or dkyil-vkhor in Tibetan Buddhism, is a key element of meditation practices in various spiritual traditions, such as the Hindu Mahavairocana Tantra and Tibetan Buddhism.

Chinese daoists believe this bright image is closely related to the "Original Essence," "Golden Flower," or "Original Light." When a meditation practitioner sees the mandala, he or she is seeing part of the "Original Essence" and entering the first level of the immortal essence. Wilhelm's translation describes some of the pictures of the Mandala.