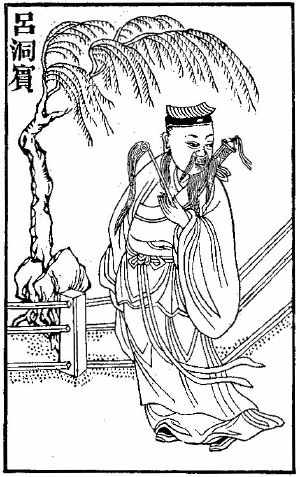 A woodcut of Lu Dongbin, one of the famous Eight Daoist Immortals.

Lǚ Dòngbīn (呂洞賓: meaning "the guest of the cavern") ("Lu Tung-Pin" in Wade-Giles) is the most widely known member of the Eight Daoist Immortals and hence is considered by some to be the de facto leader of the group. He is the most significant of the Eight and is the only one to receive individual veneration outside of the group context.

Lü Dongbin is one of the illustrious Eight Immortals (Ba Xian), a group of Daoist/folk deities who play an important role in Chinese religion and culture. While they are famed for espousing and teaching Daoist philosophy and cultivation practices, they are also figures of popular myth and legend that are known for their devotion to the downtrodden and their collective lifestyle of “free and easy wandering.” Though they are most often depicted and described in the context of their group, each has their own particular set of tales, iconography, and areas of patronage.

Much like Zhongli Quan (a fellow immortal), Lü Yan's spiritual aptitude was presaged by various miraculous events surrounding his birth. As summarized by Yetts,

At the moment when his mother gave him birth an unearthly perfume pervaded the house, and strains of celestial music were wafted from the sky, and a white crane from heaven flew down between the curtains of her bed and was seen no more. Even when a newly-born infant his frame was strong as metal, and his muscles hard as wood. The crown of his head formed a high dome resembling a crane's; his back was arched like that of a tortoise; his eyes were as brilliant as those of a phœnix; and his eyebrows extended on either side to meet the hair round the temples.[2]

After his remarkable childhood, Lü Yan decided to follow in the footsteps of his father and become a member of the imperial bureaucracy. However, despite his aptitude for poetry, philosophy and spiritual cultivation, he could not seem to pass the entrance exam. After failing twice, he started to doubt whether this was, indeed, the path that would bring him the most happiness. Stopping at an inn on his way home, the despondent Lü encountered a jolly obese man who invited him to sit down and share his supper. The future immortal agreed, but no sooner had he seated himself, he abruptly fell asleep.

In his dream, he took the imperial exam and excelled, and was thus awarded a prestigious office and soon promoted to the position of vice-minister. He then married the daughter of a prosperous household and had a son and a daughter. He was promoted again to be the prime minister. However, his success and luck attracted the jealousy of others, causing him to be falsely accused of crimes, which led to the loss of his office and his banishment to a distant rural village. His wife then betrayed him, his children were killed by bandits, and he lost all his wealth. As he was dying on the street, he woke up.

His smiling dinner companion looked at him and commented: "you have lived an entire life in less time than it took your millet to cook." At this, Lü Yan realized that his new friend was no ordinary mortal, and, when questioned, the old man admitted that he was, in fact, Zhongli Quan, a xian who was already over six hundred years old. Seeing for the first time the utter contingency of worldly achievements, Lü pledged that he wanted nothing more than to follow Zhongli's example and learn the path of spiritual attainment. In honor of this resolution, Lü Yan rechristened himself Lü Dongbin ("the guest of the cavern") as a means of constantly reminding himself that the "cavern" of mortal existence was not his true home.[3]

Over the years, Zhongli Quan instructed Lü Dongbin in the ways of magical and spiritual praxis. However, the elder immortal refused to teach his pupil the art of eternal life until he performed at least three thousand good deeds.[4] Testing him, Zhongli offered to teach him the secrets of alchemy—specifically the means of transmuting baser metals into gold. In response, Lü Dongbin asked:

"After the stones have been turned into gold, will they remain gold forever?"
[Quan] replied, "No. The gold nuggest will revert back to stones after three thousand years."
[Dong-bin] then said, "I would rather not learn a technique that could potentially delude and harm people."
[Quan] sighed and admitted, "Your understanding of the Tao surpasses mine."[5]

After this exchange, Zhongli Quan realized that Lü would eventually perform as many good deeds[6] as he could think to require, so he finished his pupil's instruction, allowing him to finally attain immortality.[7]

After he became enlightened, Lü Dongbin remained an active force in the mortal world. For example, he often made a point of testing individuals and rewarding those who proved themselves virtuous. In one instance, he disguised himself as a blind oil seller, and resolved to reward anyone who did not try to cheat him.[8] In another celebrated set of tales, he is seen combating various chimeras and evil spirits.[9] Further, this perceived positive influence remains relevant today, as many faithful Daoists and folk practitioners believe that Lü Dongbin is still an immanent presence in the world, one who is actively punishing evil-doers, vanquishing evil, healing the sick, and aiding the needy.[10]

Like the tales of many other immortals (including Zhang Guo Lao and Lan Caihe), the legendary biography of Lü Dongbin contains an implicit critique of life in medieval China (especially when that life is evaluated through a Confucian lens). Though Lü was seen as an aspiring bureaucrat (and, in some versions, even became one), he realizes that the truest form of self-improvement and social betterment lay beyond this (apparently) limited perspective. This can be seen as an explicit critique of Confucian social mores, which stress hierarchy, conventional morality, and change within the existing cultural context. Likewise, parallels can be drawn between the immortal's drive to use his learning (and magical powers) in the service of all people and the bodhisattva doctrine inherited from Buddhism. Such a correspondence is likely a simple (and probably inadvertent) syncretism, as such ideas would have been an integral part of popular thought and worship when the tales of Lü Dongbin were attaining currency.

In artistic works, Lü Dongbin is portrayed as a handsome, aristocratic man in the traditional robes of an imperial bureaucrat. He is often seen wielding a two-handed sword (thought to repel evil) or holding a fly-whisk (a common symbol for an individual with the power of flight).[11]

As the most important of the Immortals (at least from a popular perspective), Lü Dongbin has become identified as an important patron of many people, places and things.

First, he is seen as an idealized doctor and is often referred to as the "King of Medicine." In historical times, peasants often relied on his oracles as their primary source of health care information.[12] Somehow, this connection with doctors has also extended to barbers, to the extent that his image can be found in most traditional shops.[13]

In contrast with the other immortals, Lü Dongbin (likely due to his historical association with the literate classes) is venerated by the Confucians and is seen as a patron of the literati. For this reason, he is often the subject of elite-level spirit-writing cults.[14]

Much like Zhang Guo Lao, Lü Dongbin is also associated with the generation of progeny, with an especial talent for ensuring their success and prosperity.[15] For this reason, he is often featured on charms that are hung in nurseries.

Finally, he is seen as a protector against all varieties of evil spirits, and is thought to be able to repel them with his demon-killing sword.[16]

Lü Dongbin's significance is such that most Daoist temples and shrines contain at least one statue or image of him.[17] However, “he is a complex personality because, besides being a popular sage, he is also venerated as one of the Complete Realization School patriarchs and became an important patron saint in modern automatic writing cults.”[18] His general importance is further attested by Yetts, who notes that "he is portrayed more frequently than any other single member of the group; and, in addition to innumerable notices of him to be found in general Taoist literature, there are at least two large works entirely devoted to his life and doings."[19]