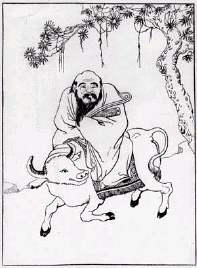 Lǎozǐ (Wade-Giles: Lao Tzu; sixth century B.C.E.) was a naturalistic philosopher-sage attributed with founding the Chinese way of life known as Daoism, and credited with having written the Dao De Jing, though both claims have been historically disputed by scholars. Perhaps a legendary figure, Laozi's influence on Chinese history, thought, and culture has nevertheless been substantial. He insisted on living in a harmonious and spontaneous manner rather than exploiting the earth and other beings for self-aggrandizement. In this way, Laozi's vision seems instructive even today for he emphasized the interconnectedness of life over human self-centeredness.

Despite the fact that the text attributed to Laozi—the Dao De Jing—is one of the most studied and translated documents in human history, it turns out that very little is actually known about Laozi himself.

The Chinese historian Ssu-ma Ch’ien (Pinyin: Sīmǎ Qiān; c. 145-90 B.C.E.) provides the two earliest biographical stories about Laozi in his Record of the Grand Historian (Shih chi (Shiji)). The first describes Laozi as an archivist in the kingdom of Zhou’s grand library. While thus employed, he was visited by a young Confucius, who was seeking advice on the proper performance of rites. Laozi rebuked him savagely, stating that without the correct attitude of non-attachment, all ritual action is pointless. The tale ends with Confucius lamenting the difficulty of following Laozi’s wisdom: “When it comes to the dragon, I have no means of knowing how it rides the wind and the clouds and ascends into heaven. Today I have seen Lao-tzu who really is like unto a dragon” (Graham 1998, 23).

The second story describes Laozi’s departure from Zhou and the composition of the Dao De Jing. After realizing that the power of the current dynasty was waning (resulting in social chaos and corruption), Laozi decided to remove himself from society altogether by retiring to the wilds beyond the Western border. “When he reached the western frontier, Yin Hsi, the guardian of the pass, said: ‘You want to withdraw forever. Please write down your thoughts for me.’ Thereupon Lao-tzu wrote a book in two sections dealing with the Tao and its virtue the Tao-Te-Ching. It had more than five thousand characters. Then he left, and nobody knows what became of him” (Kohn and LaFargue 1998, 1).

It is notable that even at this early date, and even for as revered a historian as Sima Qian, some doubts and confusion existed with respect to Laozi as a historical personage. Indeed, he describes two additional individuals (Lao Lai Zi and Lao Tan (Dan)) and states that it is unknown whether these names also, in fact, referred to Laozi. For example, Sima Qian states, “Some say Tan was Lao-tzu, some say not. No one in our time knows whether or not it is so” (Graham 1998, 24).

The absence of any clear factual evidence concerning the life and existence of Laozi has led to considerable academic consternation. Indeed, was it not for the existence of the Dao De Jing, it is likely that his life would have been dismissed as fiction long ago. Commentators traditionally address the problem of authorship (which, in this case, is primarily concerned with the author’s identity) in one of three ways:

The Legends and Sects of Laozi

As is often the case with hagiographical literature, tales of venerated figures frequently become embossed with various symbolic tropes. The Sima Qian account (the earliest extant biography), for example, begins by describing Laozi's mother conceiving after seeing a falling star. Her miraculous pregnancy continues for 62 years before she gives birth. Her“old child”(a literal translation of Laozi) was born with white hair and the ability to converse wisely (Pas 1998, 195). In the years following the dissemination of this account, interest in Laozi as a figure grew exponentially and a process of deification began.

Interestingly, he was adopted for contrary purposes by two different groups – the alchemists (individual magicians and seekers-of-power) and the ruling class. The first group came to describe him as “an immortal, a particularly gifted human being who, by his own initiative and efforts, has attained the purity and power of the celestials” (Kohn 1998, 41). The second “saw in Lao-tzu the personification of the Tao and worshipped him as a representative of their ideal cosmic and political unity” (41). Both trends reached their logical culmination when Laozi was reinterpreted as the apex of the celestial bureaucracy (either as a “supreme deity” or as a member of the “Three Heavenly Worthies”) (Pas 1998, 196-197).

This deification process was completed by approximately 150 C.E., as evidenced by the development of the Heavenly Masters School of Daoism. This group (“the first Taoist religious organization”) believed that their teachings were revelations from the deified Laozi. Thus, they took the Dao De Jing as their central scripture and concentrated their worship activities on “T'ai-shang Lao-chün (Lord Lao Most High)” (Pas 1998, 74, 155-156).

In addition to his religious significance, Laozi was also centrally important to the development of philosophical Daoism. This development was related both to the text of the Dao De Jing and to the actions of the great Han systematizers. As for the text, its poetic, esoteric style, its focus on the transformative power of non-action (Wu-wei) and its thematic emphasis on the ideal of naturalness (as key to good life and good government) made it an undisputed classic. Its classical status, in turn, caused later Han thinkers (Sima Qian among them) to select it as the quintessential example of a primitivist philosophical movement (whose other members included Zhuangzi and Liezi) (Kohn 1998, 41). As a result, Laozi, as its author, became retroactively identified as the originator of the school of philosophical Daoism.

Intriguingly, this process was completely divorced from Laozi as a historical entity. Thus, his importance as a “philosophical rallying point” is undiminished, regardless of his actual temporal existence.

Note: Some restrictions may apply to use of individual images which are separately licensed.
Retrieved from https://www.newworldencyclopedia.org/p/index.php?title=Laozi&oldid=794766
Categories:
Content is available under Creative Commons Attribution/Share-Alike License; additional terms may apply. See Terms of Use for details.