Wu-wei (Chinese = 無為, meaning "non-action" or "actionless action") is a central principle in the Chinese philosophy of Daoism. The principle affirms that one should live spontaneously in accordance with the natural flow of the cosmos called the Dao, and not act against this natural order and rhythm of nature. According to Daoism, human happiness occurs when one aligns with the Dao, and Wu-wei allows practitioners of Daoism to live in harmony with one's natural surroundings and to be mindful of the interconnectedness of all life. 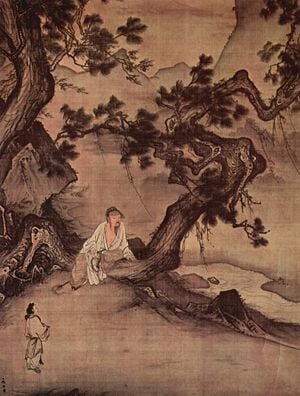 The Chinese term wu-wei is a two-character composite with the first character (無) meaning ‘not’ (in the sense of non-existence or non-presence) and the second (為) meaning ‘do’ or ‘act.’ The term is typically translated into English as “non-action,” although this translation can be misleading: rather than meaning "doing nothing," wu-wei best signifies spontaneous non-thinking action in the sense of 'absence of violent behavior,' 'unmotivated action' or 'acting naturally' (Xiaogan 41).

While wu-wei as a philosophical tenet is frequently associated with Daoism, it was, in fact, central to the majority of early Chinese philosophy. Indeed, as Ted Slingerland demonstrates in his authoritative survey of the topic, wu-wei is best understood as a unifying theme underlying many Chinese philosophical schools. To this end, he argues that “although the term wu-wei itself does not come into widespread use until relatively late in the Warring States period, the ideal that it describes – acting effortlessly and spontaneously in harmony with a normative standard and thereby acquiring an almost magical efficaciousness in moving through the world and attracting people to oneself - can be identified as a central theme in Chinese religious thought in texts as early as the Book of Odes and the Book of History, and later Chinese commentators adopted wu-wei as a term to describe this ideal (Slingerland, 296). It is perhaps this ubiquity that has caused “no common definition of wu wei [to be] accepted by Chinese classical philosophers” (Xiaogan, 41).

Despite the common usage of the term in Chinese philosophy, it was most systematically developed and considered within the writings of the early Daoist sages.

For Daoists, wu-wei is a fairly simple concept. It involves acting without desire, where desire is understood as the force that causes people and things to behave unnaturally. The natural is seen as being complementary to the Tao, while the unnatural is contradictory to it. Thus, wu-wei can be defined as “taking no action, loving tranquility, engaging in no activity and having no desires— all of which lead to natural transformation, correctness, prosperity and simplicity” (Xiaogan, 43). Two of the most common images for this mode of action are water (which naturally flows downhill) and reeds (which naturally bend, rather than breaking, when faced with a high wind). It is for this reason that the Tao Te Ching states:

The most submissive thing in the world can ride roughshod over the hardest in the world (that which is without substance entering that which has no crevices). That is why I know the benefit of resorting to no action (XLIII).

This same stress on wu-wei as a natural mode of action can be seen in the Chuang-tzu (Zhuangzi). That text describes an ideal where “all human actions become spontaneous and mindless as those of the natural world. Man becomes one with Nature, or Heaven ... and merges himself with Dao, or the Way, the underlying unity that embraces man, nature and all that is in the Universe” (Watson, 6). This can be seen as the teleological goal of the wu-wei framework.

As implied above, an innovative aspect of this Daoist conception is the association between the mode of action (wu-wei) and the normative, ontological principle (the Dao). Specifically, the Tao Te Ching suggests that, when the Dao itself acts, it acts in accordance with wu-wei: “The Way never acts yet nothing is left undone” (XXXVII). This notion is further explored in conjunction with an account of the creation of the world:

In this way, the Dao, the ontological and organizational principle of the universe, is seen to act according to the principle of wu-wei. Given the centrality of the Dao in their cosmology, such an assertion can be seen as the ultimate endorsement for this mode of action. For this reason, sages are often portrayed as following wu-wei in their actions:

Given the universality of this conception, it is perhaps not surprising that the idea of wu-wei was also applied to political leadership. This framework implies that an ideal government would be one that was as non-invasive as possible, a fact that gives the tradition a primitivist appeal. The Tao Te Ching argues that:

Should lords and princes hold fast to it [the Dao]
The myriad creatures will be transformed of their own accord.
After they are transformed, should desire raise its head,
I shall press it down with the weight of the nameless uncarved block.
The nameless uncarved block is but freedom from desire,
and if I cease to desire and remain still,
The empire will be at peace of its own accord. (XXXVII)

Therefore in governing the people,
The sage empties their minds but fills their bellies,
Weakens their wills but strengthens their bones.
He always keeps them innocent of knowledge and free of desire,
And ensures that the clever never dare to act.
Do that which consists in taking no action, and order will prevail.” (III)

Wu-wei as a philosophical ideal was not the sole province of the Daoists. Indeed, as Slingerland suggests, it was one of the most ubiquitous notions in early Chinese philosophy, with each major religio-philosophical school developing their own unique conception of it.

Though the Confucians did not frequently use of the term wu-wei in their philosophy, it appears to have been an important ideal in their thinking. Specifically, numerous passages in the Analects describe Confucius’ mastery of the rites (courtly and otherwise) – a mastery so complete that, without any notable exertion or thought, he is able to effortlessly and appropriately respond to any social situation (Slingerland, 302-303). Confucius was seen as the paradigmatic example of the Confucian gentleman (or exemplary person (chün-tzu), who learned the rites and the Classics so intently that one's every thought and action flowed naturally (and without any effort). This understanding finds more detailed exposition in the Mencius, who argues that:

the Confucian virtues, rooted in the gentleman’s mind, so permeate his character that they reveal themselves in his demeanor: clearly manifesting themselves in his face, filling his back and infusing his four limbs. Without the need for words, every movement of his body thus reveals their presence (Mencius 7:A:21; quoted in Slingerland, 303-304).

Thus, though the term wu-wei is rarely used, it can be seen in the earliest (and most influential) Confucian writings. Unlike the Daoists conception, however, it should be noted that their understanding remains strongly tied to realm of human action (a significant difference from the cosmological perspective explored above). This anthropocentric understanding of wu-wei can also be seen in the writings of the Fa Jia (“Legalist”) school.

The Legalists, whose school of thought influenced every element of the Chinese imperial system, developed the doctrine of wu-wei in their own idiosyncratic manner. Similar to the Daoist conception, the Legalists (as specifically exemplified by the Han Fei Tzu (the paradigmatic Legalist text) stressed that wu-wei began as an unselfish and unattached state of mind (Liao, 55). However, given their single-minded devotion to proper leadership, this mode of thought was only considered practicable by the ruler. In a further difference with Daoism, the Han Fei Tzu offers an entirely worldly and pragmatic justification for wu-wei. Specifically, the text suggest that by “waiting empty and reposed” the ruler will be able to observe the true thoughts and motives of his counselors:

For this reason, Peerenboom criticizes the Legalist conception of wu-wei, suggesting that it is “simply means for drawing out the intentions of ministers” (150-151).

Note: Some restrictions may apply to use of individual images which are separately licensed.
Retrieved from https://www.newworldencyclopedia.org/p/index.php?title=Wu-wei&oldid=795334
Categories:
This page was last edited on 29 August 2008, at 16:08.
Content is available under Creative Commons Attribution/Share-Alike License; additional terms may apply. See Terms of Use for details.