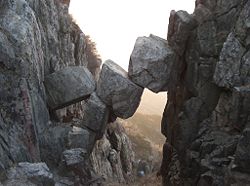 In classical Chinese thought, the natural world provides a clear example of ziran in action.

In many ways, ziran (自然 ; tzu-jan in Wade-Giles) represents a foundational concept in classical Chinese thought, one whose influence transcends the dogmatic lines of religious tradition and philosophical school. Often translated as “the natural” or “naturalness,” it is more literally rendered as the “self-so” or that which is “so-of-itself.” As a result, it can be seen as the positive correlate of wu-wei, the notion of “action-less action,” since acting without desire is only possible when embodying and manifesting one’s true nature.

While this notion receives its most explicit exposition in the philosophical writings of Laozi and Zhuangzi (the retrospectively-acknowledged creators of Daoism), it can also be seen in Confucianism and in Ch’an Buddhism. Further, the aesthetics of thought and action[1] promoted by the idea of ziran were influential in the development of Chinese cuisine, painting, calligraphy, martial arts, and meditation practice.

Ziran in a Daoist Context

From the earliest Daoist texts onward, the notion of ziran played a central role in defining the ideal mode of action and existence for its practitioners. Both the Dao De Jing and the Zhuangzi lionize the concept, suggesting that peace, harmony, and happiness can be achieved if individuals can simply “unlearn” the norms of society and behave in a simple and unaffected manner. Though the two philosophers differ on many specific points in their respective presentations, they share the notion that the Dao is, on a fundamental level, the “path of least resistance” that those behaving naturally (of themselves) will follow. For instance, one of the more metaphysical verses in the Dao De Jing states:

The way [Dao] gives them life;
Virtue [De] rears them;
Things give them shape;
Circumstances bring them into maturity.

Therefore the myriad creatures all revere the way and honor virtue. Yet the way is revered and virtue honored not because this is decreed by any authority but because it is natural [ziran] for them to be treated so.[2]

Exploring the metaphysical ramifications of this notion, Hsu argues that ziran represents the "activity" of Dao in the manifestation of worldly processes and entities. In this view, pain and evil, as experienced by human beings, arise when individuals act "unnaturally" (i.e. against what is ziran (and thus against the Dao)):

Tzu-jan [ziran], literally "self-SO," actually means tzu-huah, "self-transformation." This means that the operations of Tao in the universe are internally determined and not caused by any assertive desire or action. To interfere with the spontaneous transformations of the universe by the assertive use of the human will is to interrupt the ideal state of existence. Since Tao is the source of all things, the interruption will cause the cessation of the normal evolution of things, the destruction or "pollution" of our environment, and the physical and mental pains of living beings.[3]

In a similar manner, the Zhuangzi, in pushing its anti-epistemological agenda,[4] suggests that all divisions and evaluations are merely linguistic accidents, and that learning to see the world without their confounding influence is the most meaningful task a sage can pursue:

It is for this reason that Zhuangzi so esteems the seemingly "useless" (unwieldy gourds, cripples, cows with inauspicious markings, knotty trees)— their alleged imperfections mean that they will never be forced to act in an unnatural manner. He addresses this point in a dialogue with Hui Zi, who is complaining about a twisted, unusable tree in his front yard:

You have this big tree and you're distressed because it's useless. Why don't you plant it in Not-Even-Anything Village, or the field of Broad-and-Boundless, relax and do nothing by its side, or lie down for a free and easy sleep under it? Axes will never shorten its life, nothing can ever harm it. If there's no use for it, how can it come to grief or pain?[6]

Given their mutual stress on maintaining the natural, untrammeled life, it is understandable that the political philosophies outlined by both Laozi and Zhuangzi center on laissez-faire policies formulated so as not to hinder the engendering of ziran in the populace. The Dao De Jing states:

The best of all rulers is but a shadowy presence to his subjects
...
Hesitant, he does not utter words lightly.
When his task is accomplished and his work done
The people all say, "It happened to us naturally [ziran]."[7]

So if the gentleman is left with no choice but to preside over the world, his best policy is doing nothing. Only by doing nothing will people rest in the essentials of their nature and destiny [ziran]. … He will have an unforced air and do nothing, and the myriad things will be smoke piling higher and higher.[8]

In both cases, government is seen as a potentially repressive and life-denying force, in that it is capable of subverting the individual quest to attain naturalness. Thus, the best a ruler can do is to live by the principle of wu-wei and allow matters to resolve themselves.

While the Daoist notion of naturalness certainly seems both life-affirming and freeing, it must be acknowledged that it is also somewhat restrictive, in that it assumes that each individual will have a single optimal response to a given situation. The seemingly-paradoxical ramifications of this fact are discussed in detail in A. C. Graham's magisterial Disputers of the Tao:

Unlike Mohists and Yangists seeking grounds for right choice Chuang-tzu's [Zhuangzi's] ideal is to have no choice at all, because reflecting the situation with perfect clarity you can respond in only one way. If 'spontaneous' [ziran] suggests freedom and 'inevitable' suggests compulsion, that is only another of the dichotomies we should be leaving behind. The inevitability would be that of the artist's casually drawn line, or of the single possible word that the poets finds or fails to find. … The Taoist however wants to show that the Way is, not that which the sage desires, but the course on which he inevitably finds himself in his illuminated state.[9]

Ziran in Other Religious and Cultural Contexts

In addition to its extensive importance in characterizing the Daoist world-view, the notion of naturalness is also utilized in various other Chinese contexts, as will be summarized below.

Though the Confucian tradition did not base its ethical system upon ziran (choosing instead to focus on ritual propriety), the concept of naturalness was still instrumental in defining their "aesthetics of action." More specifically, the sage was seen as an individual who had so internalized the precepts of li that they were able to embody them without effort or guile — in a word, naturally.[10] This process is eloquently described by Edward Slingerland:

In [Analects] 6.20 Confucius describes the progression of affective states that a Confucian practitioner must experience: "One who knows it is not the equal of one who loves it, and one who loves it is not the equal of one who takes joy in it." That is, it is not enough to have a merely intellectual or practical understanding of the meanings of the rites and the contents of the canon (the Way), and even loving (hao 好) the Way involves too much conscious focus upon the object. The goal is to become so immersed in the practice that all distinction between self and object is forgotten.[11]

When Buddhism spread to China, it underwent numerous evolutionary changes as a result of its interaction with the existing religious and philosophical spheres. One of these developments was the extension of the conception of liberation (nirvana) to include the indigenous notion of ziran. This evolution is attested to in the Recorded Conversations of Shen-Hui, an early Ch'an text (ca. 750 C.E.):

The text goes on to argue that "the spontaneity of the monks is the self-nature of living beings. Moreover, the scripture says, 'Living beings [have] spontaneous wisdom and wisdom without teacher.' This is called spontaneity."[13] In this way, the notion of freedom and salvation championed the Buddha adopted a measure of the inherency and naturalism that traditionally characterized Daoist thought.

In addition to the explicitly religious and philosophical contexts introduced above, the notion of naturalness as an "aesthetic of action" was tremendously influential in the development of Chinese arts (from cooking, to calligraphy, to combat). In all cases, the ideal was to have internalized one's respective discipline to the extent that it could be effortlessly manifested in practice:

The expert is also at home with whatever techniques are required, but these are, in the final analysis, secondary and ancillary to the basic retention of balance in being-in-nonbeing. In the creative realm, the aesthetic quality exhibits itself in terms of the sustenance of the balance in becomingness. That is to say, rather than a once-displayed phenomenon of balance, the expert is able to preserve it in such a way that his work will issue forth something novel and unique. The aesthetic quality arises in virtue of capturing the balanced dynamic becoming or the fluid complementarity of sustained being-in-nonbeing. It should be noted that any polarization in the realm of being and attendant attachment to its elements will prevent the rise of any aesthetic quality since becomingness will now be dominated by a mechanical nature/procedure wherein elements are repeated in a strained sense.[14]

In this way, whether one painting with ink, working through a sequence of taiji postures, or simply sweeping the floor, one's actions could be gauged as successful to the extent that they are internalized (and thus unaffectedly natural). It is likely this aesthetically-diffuse notion of ziran that has had the most notable impact on the East Asian cultural sphere.

Note: Some restrictions may apply to use of individual images which are separately licensed.
Retrieved from https://www.newworldencyclopedia.org/p/index.php?title=Ziran&oldid=751673
Categories:
Hidden category:
This page was last edited on 7 July 2008, at 01:13.
Content is available under Creative Commons Attribution/Share-Alike License; additional terms may apply. See Terms of Use for details.