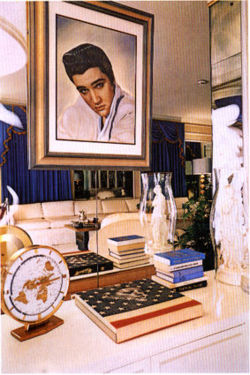 This reproduction of a remarkable photo by William Egglestone shows Elvis Presley's personal office shortly after his death. At the bottom of the pile of books at the right is a copy of the 1973 edition of The Divine Principle.

Elvis Presley impacted American and world culture in a major way. The raw energy of his performances and early recordings helped unleash the youthful passions that led to the sexual revolution in the 1960s. At the same time, his blending of R & B and country music styles did much to break down the racial barriers which continued to plague American society since slavery time.

On a personal level, Elvis maintained a strong belief in God and spirituality throughout his life. Not only did he consistently play and sing gospel music privately, he also performed it publicly — and often — after his 1968 comeback. He was also a searcher, delving into various forms for spirituality. A photo taken shortly after his death even shows a copy of the 1973 edition of The Divine Principle on his credenza under his portrait. [1] How he got the book remains a mystery.

Another interesting connection to the Unification Movement is that Mitsuharu Ishii, who assisted in several of Reverend Sun Myung Moon's cultural endeavors, was in negotiations with Colonel Tom Parker in 1977 to bring Elvis to Japan. Mr. Ishii brought Reverend Moon to see a Presley performance in Las Vegas sometime early that year in connection with the possible tour. Reverend Moon advised him that the plan would not reach fruition. "He is a sick man," Ishii recalls Reverend Moon saying, "and will not live long."

Unification Aspects is designed to relate the subject of this article to Unification Thought and to aid
teachers and researchers who wish to further pursue these topics from a unification perspective.
Retrieved from https://www.newworldencyclopedia.org/p/index.php?title=Talk:Elvis_Presley&oldid=943261
Content is available under Creative Commons Attribution/Share-Alike License; additional terms may apply. See Terms of Use for details.