Stephen III of Moldavia, or Stephen III (c. 1433 - July 2, 1504), also known as Stephen the Great (Romanian: Ştefan cel Mare; Ştefan cel Mare şi Sfânt, "Stephen the Great and Holy" in more modern versions) was Prince of Moldavia between 1457 and 1504, and the most prominent representative of the House of Muşat. During his reign, he turned Moldavia into a strong state and maintained its independence against the ambitions of Hungary, Poland, and the Ottoman Empire, which all sought to subdue the land. Stephen achieved fame in Europe for his long resistance against the Ottomans. He was by his own account victorious in thirty-four of his thirty-six battles, and was one of the first to win a decisive victory over the Ottomans at the Battle of Vaslui, after which Pope Sixtus IV deemed him verus christianae fidei athleta (true Champion of Christian Faith). He was a man of faith who displayed his piety when he paid the debt of Mount Athos to the Ottoman Sultan, ensuring the continuity of Athos as an autonomous monastic community.

With Wallachia and Transylvania, Moldavia was historically one of three principalities that shared Romanian identity. All three were geo-politically situated at the frontier between empires and culture, especially between East and West. Stephen III lived out his life on the edge of the Ottoman expansion into Europe. Inevitably, this made the region vulnerable to conquest, after Stephen's reign Moldavia became a client state under the Ottomans. In the eighteenth century, Russia would also pursue ambitions in the region. Yet, despite conflict and confrontation, a strong identification with Christianity brought about a rich culture which blended East and West, creating a cultural bridge between rival civilizations. Nor was conflict constant. The early seventeenth century under Ottoman rule saw a period of peace and prosperity. As the story of human development is told, ensuring that a one-sided picture of constant conflict and enmity between people of different racial, religious and cultural identities does not dominate at the expense of episodes of harmony, is a vital task. Stephen is remembered as a Christian champion against the Ottomans but in the end he entered a peace treaty.

Early life and rise to power

Stephen was a member of the ruling Muşatin family. His father Bogdan II had ruled Moldavia for two years (1449 to 1451) before being killed in a stealthy raid led by Stephen's uncle, Petru Aron. Bogdan II was attending a wedding of one of his boyars (nobles)—who apparently was in collusion with Petru Aron—and the surprise was complete. Stephen barely escaped with his life, but his father was captured and beheaded on the spot by his half-brother Petru Aron. Between 1451 and 1457, Moldavia was troubled by civil war between Petru Aron and Alexăndrel—a nephew of Alexandru cel Bun.

Following the outbreak of the conflict, Stephen took refuge in Transylvania, seeking the protection of military commander John Hunyadi. After that, he moved to the court of Vlad III Dracula and, in 1457, managed to negotiate 6,000 horsemen as military assistance, putting them to use in a victorious battle against Petru Aron at Doljeşti, known to history as an "irresponsible and bloodthirsty tyrant."[1] Following another lost battle at Orbic, Aron fled to Poland, while Stephen was crowned Prince. Two years later, he led an incursion into Poland in the search for Aron, but was met with resistance. Instead, a treaty was signed between Moldavia and Poland, through which Stephen recognized King Kazimierz IV Jagiellon as his suzerain, while Aron was barred from entering Moldavia. 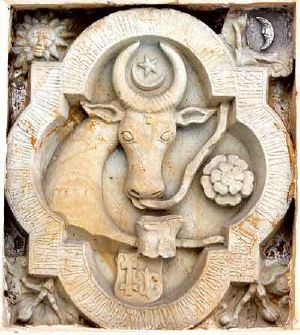 Coat of arms of Moldavia in 1481, at Putna Monastery.

at Războieni (Battle of Valea Albă) the next year, but the Ottomans had to retreat after they failed to take any significant castle (see siege of Cetatea Neamţului) as a plague started to spread in the Ottoman army. Stephen's search for European assistance against the Turks met with little success, even though he had "cut off the pagan's right hand"—as he put it in a letter.[2] According to one source, he felt himself called to defend Christendom and sent out appeals for help from Christian states.[3] According to another source, he also attempted an alliance with the Shah of Persia, suggesting that he saw the enemy more in national terms than religious; "in a vain hope of organizing a world wide coalition against the Turks," he "entered into negotiation with Venice and the Shah of Persia."[4]

Menaced by powerful neighbors, he successfully repelled an invasion by the Hungarian King Matthias Corvinus, defeating him in the Battle of Baia (in 1467), crushed an invading Tartar force at Lipnic and invaded Wallachia in 1471 (the latter had by then succumbed to Ottoman power and had become its vassal). When the Ottoman Sultan Mehmed II launched a retaliation attack on Moldavia, Stephen defeated the invaders at the Battle of Vaslui in 1475, a victory which temporarily halted the Turkish advance.

Stephen helped to oust Vlad Ţepeş's brother, the pro-Ottoman Radu the Handsome, whose daughter he would marry, and installed Laiotă Basarab the Old on the throne in the hope of bringing Wallachia back into the Christian camp. This proved to be illusory, as Laiotă quickly turned his back on Stephen, deeming that Ottoman protection would better help him consolidate his rule. With Stephen's support, Laiotă was removed from the throne in 1482 by Vlad Călugărul, brother to Vlad Tepes, and for the remainder of the fifteenth century Wallachia remained relatively stable under his rule.

After 1484, when he lost the fortresses of Chilia Nouǎ and Cetatea Albǎ to an Ottoman blitz invasion, Stephen had to face not only new Turkish onslaughts which he defeated again on November 16, 1485 at Catlabuga Lake and at Şcheia on the Siret River in March 1486, but also the Polish designs on Moldavian independence. Finally on August 20, 1503, he concluded a treaty with Sultan Beyazid II that preserved Moldavia's self rule, at the cost of an annual tribute to the Turks. Stephen counseled his son to make peace with the Turks provided that the Church was "left untouched." He was saddened that Christians had failed to unite against a common foe.[5]

From the sixteenth century on, the Principality of Moldavia would spend three hundred years as an Ottoman vassal. In his late years, he dealt successfully with a Polish invasion, defeating the Poles at the Battle of the Cosmin Forest. Stephen died in Suceava, and is buried in the Monastery of Putna. His son, Bogdan III, succeeded him.

Stephen said that he had waged 36 battles, of which he won 34.[6] Though it was marked by continual strife, Stephen's long reign brought considerable cultural development; many churches and monasteries were erected by Stephen himself; some of which, including Voroneţ, are now part of UNESCO's World Heritage sites.

Stephen was seen as holy by many Christians, soon after his death. He has been canonized a saint by the Romanian Orthodox Church under the name "The Right-believing Voivod Stephen the Great and the Holy."

In a 2006 Televiziunea Română (Romanian national television) campaign on TVR 1, Stephen III was voted by almost 40,000 viewers as the "Greatest Romanian" of all time.[7] The iconic status enjoyed by Stephen and by Michael the Brave is expressed thus by Boia, who describes the two heroes as "the embodiment of heroism, the wellspring of power, of belief and of pride for the Romanian people."[8]

Seton-Watson says that he was "equally great as a warrior and an administrator," was generous in his "grant of monastic lands" and patronage of art and literature. He commissioned the building of about forty churches.[9]

With Wallachia and Transylvania, Stephen's Moldavia was historically one of three principalities that shared Romanian identity. All three were geo-politically situated at the frontier between empires and culture, especially between East and West. Stephen III lived out his life on the edge of the Ottoman expansion into Europe. Inevitably, this made the region vulnerable to conquest, after Stephen's reign Moldavia became a client state under the Ottomans. In the eighteenth century, Russia would also pursue ambitions in the region. Yet, despite conflict and confrontation a strong identification with Christianity, a rich culture emerged which blended East and West, creating a cultural bridge between rival civilizations. As the story of human development is told, ensuring that a one-sided picture of constant conflict and enmity between people of different racial, religious and cultural identities does not dominate at the expense of episodes of harmony, is a vital task. Stephen is remembered as a Christian champion against the Ottomans but in the end, if reluctantly, he entered a peace treaty.

Retrieved from https://www.newworldencyclopedia.org/p/index.php?title=Stephen_III_of_Moldavia&oldid=1083181
Categories:
Hidden category:
This page was last edited on 21 October 2022, at 17:41.
Content is available under Creative Commons Attribution/Share-Alike License; additional terms may apply. See Terms of Use for details.