This article is about speed and velocity in Physics. 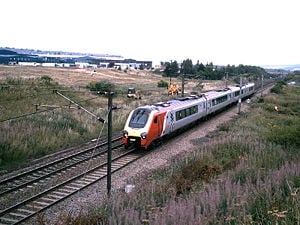 The speed of a train is the distance it is traveling per unit of time. Its speed in a given direction is called its velocity. If the velocity of the train changes with time, the train is said to undergo acceleration or deceleration.

The speed of an object is the rate of motion of the object, or the rate at which the object changes its position. It is usually expressed as the distance d traveled by the object per unit of time t. Speed is a scalar quantity—it indicates how fast the object is traveling, but not the direction in which it is traveling.

The term velocity is used when one combines the speed of a moving object with the direction in which it is moving. Thus, velocity is a vector quantity, and speed may be regarded as the magnitude component of velocity. For example, the phrase "five meters per second" indicates the speed of the object, whereas the phrase "five meters per second east" indicates the velocity of the object.

Vehicles often have a speedometer to measure their speed. When an object (such as an aircraft) is moving horizontally as well as vertically, a distinction is made between its "forward speed" and its "climbing speed."

Measurement of speed and velocity

Both speed and velocity are measured in the same physical units, but speed does not contain the element of direction that velocity has.

The speed or velocity of an object is calculated by a simple mathematical formula:

The average velocity (v) of an object moving a

where d is the distance moved by the object (or its "displacement") and t is the time it takes to move through that distance.

The dimensions for speed are distance/time.

In the SI (metric) system, it is measured in meters per second (m/s).

Units of speed include:

), which is rate of total distance (or length) and time interval. For example, if you go 60 miles in two hours, your average speed during that time is 60/2 = 30 miles per hour, but your instantaneous speed may have varied.

Instantaneous speed defined as a function of time on interval

It is often intuitively expected, but incorrect, that going half a distance with speed

and second half with speed

. The correct value is

(Note that the first is a proper arithmetic mean while the second is a proper harmonic mean).

Average speed can be derived also from speed distribution function (either in time or on distance):

Below are some examples of different speeds (see also main article Orders of magnitude (speed)):

The instantaneous velocity vector (v) of an object that has position x(t), at time t, can be computed as the derivative:

to some point in time later

The final velocity v of an object which starts with velocity u and then accelerates at constant acceleration a for a period of time t is:

The average velocity of an object undergoing constant acceleration is

, where u is the initial velocity and V is the final velocity. To find the displacement, s, of such an accelerating object during a time interval, t, then:

When only the object's initial velocity is known, the expression,

h is the height, v is the velocity, t is the time, and s is the starting height. Usually one will get two answers and must use logic to realize the real answer and what the other one pertains to.

can be used. These basic equations for final velocity and displacement can be combined to form an equation that is independent of time, also known as Torricelli's equation:

The kinetic energy (energy of motion) of a moving object is linear with both its mass and the square of its velocity:

The kinetic energy is a scalar quantity.

V speeds are speeds that define certain performance and limiting characteristics of an aircraft. (The "V" stands for velocity.) They are established by the manufacturer during design and testing and are specific to the aircraft model.

Usually, V speeds are relative to the air through which the aircraft is moving and are thus airspeeds. In many cases, they are defined by reference to the standard atmosphere or other specific conditions, taking into account the aircraft's maximum gross weight. The pilot is responsible for calculating the effective value based on the actual weight and air density. In other cases, the indicated airspeed, the value uncorrected for atmospheric pressure differences (height and temperature), is directly useful for the pilot.

In the U.S., V speeds are stated in knots or (for older aircraft models) miles per hour. For faster aircraft, some speeds are also defined by Mach number.[1] Typically, V speeds are given for an aircraft at maximum gross weight, and are adjusted for lighter weights. The scheduled figures are given in the aircraft Flight Manual and Performance Manual.

Retrieved from https://www.newworldencyclopedia.org/p/index.php?title=Speed_and_Velocity&oldid=1029391
Categories:
Hidden category:
This page was last edited on 22 December 2019, at 21:40.
Content is available under Creative Commons Attribution/Share-Alike License; additional terms may apply. See Terms of Use for details.