Southern rock is a sub genre of rock music. It developed in the Southern United States from rock and roll, boogie and blues, and is focused generally on electric guitar and vocals. Known by its aggressive sound which beamed of a strong regional pride, southern rock revitalized the American rock scene as well as reviving southern cultural identity in the United States. 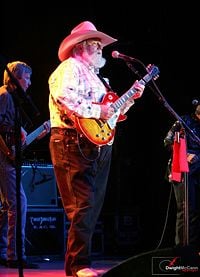 Charlie Daniels in concert at the Chumash Casino Resort in Santa Ynez, California.

Rock music's origins lie mostly in the music of Southerners, and many stars from the first wave of 1950’s rock and roll such as Elvis Presley, Little Richard, Bo Diddley and Jerry Lee Lewis hailed from the Deep South. But the British Invasion, and the rise of folk rock and psychedelic rock in the middle 1960s, shifted the focus of new rock music away from the rural south and to large cities like Liverpool, London, New York, San Francisco, and Los Angeles.

In the late 1960s, traditionalists such as Creedence Clearwater Revival (from Northern California), and The Band (Canadian, though drummer Levon Helm is a native Arkansan) revived interest in the roots of rock music. (See Muscle Shoals Music.)

Eventually the spotlight once again turned to bands from the American South. The Allman Brothers Band out of Macon, Georgia made their national debut in 1969 and soon gained a loyal following. The band was formed in Jacksonville, Florida.[1] Their blues-rock sound on one hand incorporated long jams informed by jazz and classical music, and on the other hand incorporated softer elements of country and folk with a Southern feel. The death of guitarist and leader Duane Allman in 1971 did not prevent them from gaining widespread popular appeal for the next several years, until internal tensions broke them apart after 1976. Because a certain type of blues music, and essentially, rock and roll, was invented in the South, Gregg Allman has commented that "Southern rock" is a bit redundant; it's like saying "rock rock."[2]

The Allman Brothers were signed to Capricorn Records, a small Macon outfit headed by Phil Walden (former manager of Otis Redding). A number of somewhat similar acts also recorded on Capricorn, including the Marshall Tucker Band from South Carolina, Wet Willie from Alabama, Grinderswitch from Georgia (and comprised of Allman Brother's roadies), and the Elvin Bishop Band from Oklahoma.

Not on Capricorn, but loosely associated with this first wave of Southern rock, were Barefoot Jerry from Tennessee and the Charlie Daniels Band from North Carolina. Indeed it was Charlie Daniels, a big-bearded fiddler with a knack for novelty songs, who gave Southern rock its self-identifying anthem with his 1975 hit, "The South's Gonna Do It Again," whose lyrics mentioned all of the above bands and then asserted: "Be proud you're a rebel / Cause the South's gonna do it again." A year earlier, Daniels had started the Volunteer Jam, an annual concert held in Tennessee that would bring together many Southern rock artists in a loose setting. The Winters Brothers Band from Franklin, Tn. was a band Charlie Daniels helped to get started with "Sang Her Love Songs," "Smokey Mountain Log Cabin Jones," and more. They still are performing and have an annual jam in Nolensville, Tennessee every year.

In the early 1970s, a different wave of hard rock Southern groups emerged that emphasized stripped down boogie rhythms, fast guitar leads derived from heavy metal, and lyrical themes borrowed from the concurrent outlaw country movement. Also mentioned in "The South's Gonna Do It," Lynyrd Skynyrd out of Jacksonville, Florida dominated this genre until the deaths of lead singer Ronnie Van Zant and other members of the group in a 1977 airplane crash. This band has more of a hard rock sound than the blues based Allman Brothers.[3] After this tragic plane crash members Allen Collins and Gary Rossington started another band called Rossington-Collins band. Groups such as .38 Special, The Outlaws, Molly Hatchet, Blackfoot, Point Blank and Black Oak Arkansas also thrived in this genre for a time.

The Allmans Brother's Southern feel came more from the temperament of its music ("Hot 'Lanta," "Little Martha," interpolations of "Will the Circle Be Unbroken") than any explicit cultural identification. Phil Walden, the Allman Brother's, and other Capricorn artists had also played a part in Jimmy Carter's successful, unity-based run for the presidency; Carter himself was an avowed Allman Brother's fan. Even within the Skynyrd branch of Southern rock, the appearance of Molly Hatchet on the dance-oriented show Solid Gold showed that the southern rock/metal combination had some universal appeal.

Not all Southern rock artists fit into the above molds. The Atlanta Rhythm Section and the Amazing Rhythm Aces were more focused on tight vocal harmonies, Louisiana's Le Roux ranged from Cajun-flavored southern boogie early on to a more arena rock sound later on, while the Dixie Dregs and Allman Brother's offshoot Sea Level explored jazz fusion.

However, by the beginning of the 1980s, with the Allman Brother's and Lynyrd Skynyrd both broken, with Capricorn Records in bankruptcy, and with Jimmy Carter out of office, much of Southern rock had become thoroughly enmeshed into corporate arena rock. A Southern rock group which began to also gain popularity during this time was Doc Holliday. With the rise of MTV, New Wave, and glam metal, most surviving Southern rock groups were relegated to secondary or regional venues. Bands such as Better Than Ezra, Drivin N Cryin, Cowboy Mouth, Dash Rip Rock and Third Day emerged as popular Southern bands across the Southeastern United States during the ‘80s and ‘90s.

One notable exception was Texas's ZZ Top, who had started in 1970 and were the one other band mentioned in "The South's Gonna Do It." The original band was still together to perform in 2001 at President George W. Bush's Inauguration.[4] In the 1980s they added slick synthesizer production to their boogie blues sound, and skillfully used music videos to achieve great popularity. There were occasional hits by groups such as the The Georgia Satellites as well.

During the 1990s the Allman Brothers reunified and became a strong touring and recording presence again, and the jam band scene revived interest in extended improvised music (although the scene also owed much to the Grateful Dead, a group that relied heavily on southern music traditions). Incarnations of Lynyrd Skynyrd also made themselves heard. Hard rock groups with southern rock touches such as Jackyl renewed some interest in Southern rock. Classic rock radio stations played some of the more familiar 1970s works, and Charlie Daniels's Volunteer Jam concerts were still going.

The influences of southern rock

Even the grunge music scene was influenced in some measure by Southern rock. Songs such as Pearl Jam's "Dissident" and Stone Temple Pilots' "Big Empty" and "Interstate Love Song" feature guitar licks and arrangements that harken back to the classic Southern sound.

But some rock groups from the South, such as Georgia's R.E.M., B-52's, Widespread Panic, and Black Crowes, Florida's Sister Hazel, and Mississippi's Blind Melon, incorporated Southern musical and lyrical themes without explicitly allying with any Southern rock movement.

In the late 1990s and early 2000s, Detroit rapcore star Kid Rock began blending in the southern rock tunes he'd grown up with in his in your face rap tunes in 2001. He included several southern rock tracks on his Cocky (album) album and then a full out blitz of it on his 2003 self-titled album.[5] His major influence has been Lynyrd Skynyrd, the admiration looks like it goes both ways. Leon Wilkeson (on the song "American Beauty"-left off Cocky after his death) and Billy Powell (on the upcoming song "All Summer Long") have joined him on his albums, while they allowed him to cover Free Bird on his 2006 "Live" Trucker album. In 2003 he also joined them on a remake of "Gimmie Back My Bullets." He inducted them into the Rock And Roll Hall of Fame in 2005.

In 2005 Southern rock received new exposure from an unlikely source when singer Bo Bice took an explicitly Southern rock sensibility and appearance to a runner-up finish on the massively watched but normally pop-oriented American Idol television program. Fueled by a key early performance of the Allmans' "Whipping Post" and later performing Skynyrd's "Free Bird" and, with Skynyrd on stage with him, "Sweet Home Alabama," Bice demonstrated that Southern rock still had a place in the American music pantheon.

Post-grunge bands such as Saliva, Nickelback, Default, and Theory of a Deadman, have included a Southern Rock feel to their songs and have gone as far as to cover southern rock classics like "Simple Man" and "Tuesdays Gone." Metallica has also covered "Tuesday Gone" on their Garage Inc. album.

Additionally, Indie Rock groups such as Kings of Leon, My Morning Jacket, Ocha la Rocha, Soulhat, and The Steepwater Band combine Southern rock with rawer genres, such as garage rock, alt-country, and blues-rock.

Much of the old style Southern rock (as well as other classic rock) has made its transition into the country music genre, establishing itself along the lines of outlaw country in recent years. Bands such as Skynyrd and Daniels frequently play country music venues, and the influence of Southern rock can be heard in many of today's country artists, particularly male vocalists.

Beginning in the 1980s and continuing into the new millennium, bands formed that combined heavy metal with southern rock and blues, often including southern references and imagery. The style began with groove metal, an offspring of thrash, whose creation is usually credited to Exhorder. The Texas outfit Pantera popularized the style (beginning with 1990's Cowboys from Hell), though the style's moniker was not often used due to confusion with Post-thrash. Southern Sludgecore, also starting in Louisiana, began a few years later. Some important bands include Eyehategod (from Louisiana), Corrosion of Conformity (from North Carolina), Crowbar (from Louisiana), and Down (from Louisiana).

Zakk Wylde and his Black Label Society, though hailing from New Jersey, have strong Southern rock influences and vibes, perhaps advanced by Wylde's close friendship with Dimebag Darrell of Pantera.