Sinmun of Silla (r. 681 – 692) was the thirty-first king of Silla, one of the early kingdoms of Korea. He was the eldest son of Silla's unifier-king, King Munmu (문무왕, 文武王) and Queen Ja-eui (자의, 慈儀). Sinmun's reign may be characterized by his attempts to consolidate royal authority following unification and to reorganize and systematize the governing apparatus of the newly enlarged Silla state. He faced the challenges of merging the administration of three formerly separate states into one, as well as the adjustments in administration and influence that accompany the transition from a country long at war now entering a period of peace.

The beginning of Unified Silla

The state of Silla, sometimes called Shilla, arose on the southeastern part of the Korean peninsula around 50 B.C.E. and continued for almost 1000 years until 935, when it was absorbed into Goryeo. Sinmun's father, King Munmu, and grandfather, King Taejong Muyeol, expanded the kingdom in the seventh century, with the assistance of an alliance with the Tang Chinese. In the 660s, during Muyeol's reign, a coalition of Silla and Tang forces took over Baekje to the west and Goguryeo to the north of Silla. About a decade later, in 676, while Munmu was on the throne, Silla pushed out the Tang forces, gaining sole control of most of the Korean peninsula, and marking the beginning of the Unified Silla period. The remainder of Goguryeo's territory, the northernmost part of the Korean peninsula and adjacent territory in what is now China, emerged as the new country of Balhae, which lasted from about 698-926.

Sinmun's rise to the throne 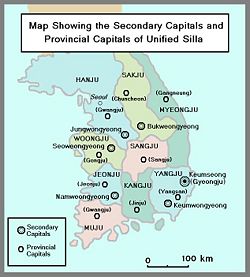 Munmu designated Sinmun as Crown Prince in 665, soon after he took the throne. Munmu had ruled Silla for twenty years when he fell ill in 681. On his deathbed, he abdicated to his son, Prince Sinmun, saying, "A country should not be without a king at any time. Let the Prince have my crown before he has my coffin." Munmu had begun the construction of Gameunsa Temple, about 500 m from the East Sea, to secure Buddha's protection for the kingdom against sea pirates. Sinmun completed the temple, dedicating it to his father's memory. Nothing remains of Gameunsa except two stone pagodas. At 13.4 m high, the pagodas are the tallest three-story stone pagodas from the Silla era, and have been designated as National Treasure No. 112.

Legends about Sinmun and Manmu

Legend has it that King Manum told Sinmun, "Cremate my remains and scatter the ashes in the sea where the whales live. I will become a dragon and protect the Kingdom." King Sinmun did as his father asked, and scattered his ashes over Daewangam (the Rock of the Great King), a small rocky islet a hundred meters or so off the Korean coast. King Sinmun also built a waterway for the sea dragon to come to and from the sea and land, and he built a pavilion, Eegun, overlooking the islet so that future kings could pay their respects to the great King Munmu.

Another legend tells that in a dream, King Munmu and the famous general Kim Yu-shin appeared to King Sinmun and said to him, "Blowing on a bamboo flute will calm the heavens and the earth." King Sinmun awoke from the dream, rode out to the sea and received the bamboo flute, Monposikjuk. Playing the bamboo flute invoked the spirits of King Munmu and General Kim Yu-shin and would push back enemy troops, cure illnesses, bring rain during drought, and halt the rains in floods.

Sinmun came to power in the immediate wake of Silla's unification of the peninsula following its defeats of rival Baekje and Goguryeo with military aid from Tang China, and then its check of Tang ambitions to establish its hegemony over the peninsula. In late summer 681, not long after Sinmun took the throne (the official period of mourning for the recently deceased King Munmu was, in fact, still in effect), a serious revolt broke out. Kim Heumdol (금흠돌 金欽突), a high-ranking Silla official, led a clique of aristocratic officials in a serious challenge against royal authority. The Kim Heumdol Revolt gave Sinmun an opportunity to solidify his power through a purge of the aristocrats involved.

Some of the aristocrats involved in the revolt were military leaders who had enjoyed a measure of influence and control during the previous decades in the struggle to bring Baekje and Goguryo under Silla control and now struggled with their waning influence as the kingdom enjoyed a period of relative peace. Another factor in Sinmun's grievances against Kim Heumdol, who was Sinmun's father-in-law, may have been his daughter's failure to produce a son, leaving Sinmun in jeopardy of lacking a male heir. Some scholars interpret the source of aristocratic grievance as the rising influence of non aristocratic officials, who were increasingly being used to staff government posts. In any case, the 681 revolt was soon put down and Kim Heumdol and those implicated were executed.

Further evidence of Sinmun's ambitious attempts to buttress central authority lies in a 689 royal edict that eliminated the official salary system, called the nogeup (록읍, 錄邑). Under the nogeup system, officials did not receive a salary, but rather were alloted large areas of land, along with the people living on them, and the gained their living expenses by taxing the residents of their plots of land. In place of the nogeup, Sinmun instituted a system wherein officials were allotted only "office land" or jikjeon (직전, 職田) from which they were allowed to procure only taxes on grain. This was clearly meant to sever the landed power base of aristocratic officialdom. In time, however, the aristocracy, who were united in their determination to protect the old system, won out against this royal decree, and eventually (though not in Sinmun's reign) the old stipend village system would be revived.

In 689, Sinmun also attempted to move the Silla capital from Gyeongju to Dalgubeol (달구벌, 達句伐), now the city of Daegu, evidence again that Sinmun was making efforts to strengthen the base of royal power by moving away from Gyeongju, which was so firmly established as the center of influence of the aristocratic clans. Although the plan to move the capital to Dalgubeol is described in the Samguk Sagi, there is no clear explanation of why Sinmun abandoned his attempt to move; however, it is safe to assume that the plan encountered stiff resistance by the aristocrats in the capital.

Following the attempted Kim Heumdol Revolt, Sinmun decided to rescind the fiefdom that had been granted earlier to Anseung, of the former royal lineage of Goguryo, asking Anseung to come live in the Silla capital of Gyeongju in 683. This led to another rebellion the following year when military leaders who had served under Anseung joined with his relatives and seized the land, now in Iksan, that had originally been given to Anseung. Sinmun was successful in suppressing this rebellion as well, confirming his control of the country. Although Sinmun was successful in asserting the strength of the throne against the aristocracy, in the following two centuries of Silla rule, there were frequent problems with social unrest and political upheavals.

Sinmun's reign dealt with the expansion of the Silla government and reorganization of Silla now expanded territory. Several new departments were established and for the first time the kingdom was organized into a system of nine provinces, following the pattern of nine provinces of China established during the reign of King Yu, legendary founder of China's Xia Dynasty. Sinmun also established a series of secondary capitals to which Sinmun relocated many of the peoples subjugated by the defeats of Baekje and Goguryeo. In 682, Sinmun also established the Gukhak, or National Academy, dedicated to training officials in the Confucian classics. Soon after that, he dispatched an emissary to Tang, then under the rule of Empress Wu, to request copies of the Book of Rites and other classics.

Sinmun died in 692, having weathered several serious challenges to royal authority and set up a framework for the organization and governance of the expanded Silla state. Sinmun also reorganized the military, changing it from the yukcheong, or "six garrisons," of earlier Silla, to nine seodang divisions and ten garrisons or cheong. Each of the nine seodang had its own color—green, purple, white, scarlet, yellow, black, cobalt, red, and blue, which were applied in the collars of their uniforms. Unlike the garrisons, the soldiers in the nine seodang included not only natives of Silla, but also the former citizens of Baekje and Goguryeo, incorporating them into the authority structure. Unlike the old yukcheong which were headed by of military leaders of the aristocracy, the new seodangs were under the direct command of the king, adding to the centralization of royal power. The seodang divisions remained in the capital of Gyeongju, while the 10 new garrisons were distributed throughout the other cities of the kingdom, giving the throne a strong base of authority for governing the country.

Retrieved from https://www.newworldencyclopedia.org/p/index.php?title=Sinmun_of_Silla&oldid=1081638
Categories:
Hidden category:
This page was last edited on 9 October 2022, at 08:52.
Content is available under Creative Commons Attribution/Share-Alike License; additional terms may apply. See Terms of Use for details.