Seongdeok Daewang, or Seongdeok the Great reigned from 702–737 C.E. as the thirty-third king of the ancient Korean kingdom of Silla, in the early part of the Unified Silla period. Less than 50 years before Seongdeok took the throne, the neighboring rival kingdoms of Baekje and Goguryeo had come under the control of the Silla Kingdom, creating the larger Unified Silla Kingdom that was the precursor to the later Goryeo and Joseon Dynasty Joseon Dynasties. Seongdeok's reign is recorded as the pinnacle of the Silla period. Territorial disputes continued with Silla's neighbor to the north, Balhae, a young kingdom that had developed in the northern part of the Goguryeo territory when Goguryeo fell to Silla in the late seventh century, and its southern territories were absorbed by Silla.

Ascension to the throne

Seongdeok was the second son of King Sinmun, Silla's thirty-first monarch, who is credited with the successful reorganization of Silla into a unified whole, adjusting the administration to incorporate the recently added territory and people of Baekje and Goguryeo. Sinmun was succeed by his eldest son, who ruled as King Hyoso, and when Hyeso died without an heir, the throne passed to Sinmun's second son, Seongdeok. 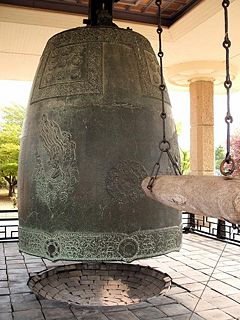 The Emille Bell, the largest bell ever made in Korea, commissioned as a tribute to King Seongdeok, by his son Gyeongdeok, the thirty-fifth monarch of Silla.

Despite suggestions of continued power struggles between aristocratic and royal prerogative, the reign of King Seongdeok is seen by most Korean scholars as the apogee of the Unified Silla state. Relations between Silla and Tang China reached unparalleled levels of cooperation. This accommodation following years of confrontation and competition over hegemony in Korea had much to do with Tang's realization that Silla would prove more valuable as an ally on its flank than as a rival, during a period when Tang was facing continued challenges to its authority in the far west and on the northern steppes—challenges from Tibet, the Malgal, dynamic Islamic forces emerging out of Central Asia, as well as the state of Balhae, which had emerged in the late seventh century in the northern territory of the old Goguryeo state. Indeed, troubled by an increasingly confrontational Balhae (which had actually launched a seaborne attack against Tang in 733), in 733 the Tang emperor Xuanzong enfeoffed King Seongdeok as Military Commander of Ninghai (Ninghai junshi 寧海軍使) with orders to chastise the Balhae/Malgal state. Though King Seongdeok did in fact launch a northern campaign that same year, it was foiled by a blizzard.

Silla, too, was concerned by the Balhae resurgence. In 721 King Seongdeok ordered the construction of a great wall across Silla‘s northern border. Remnants of this wall can still be seen in what is today South Hamgyǒng province, North Korea. Plagued as well by the raids of Japanese pirates along the southern coast, the following year (and quite likely with the same laborers) Seongdeok also had a large fortress erected near the capital of Gyeongju that extended ten kilometers in circumference. According to the Samguk Yusa, a thirteenth–century Korean record of history and fable that deals with the period in question, the fortress (known as Mobeol prefectural fortress) required the labor of nearly 40,000 men, a massive mustering of manpower that is testimony of the increasing power of the centralized monarchy.

The reign of Seongdeok also bears evidence of continued attempts at reforming the land system of Silla. The dispersal of “able–bodied land” (jeongjeon 丁田) is first mentioned as taking place in the twenty–first year of King Seongdeok (722). The exact nature of able–bodied land is disputed since almost no corroborating evidence remains. However, based on the title, it would seem to be land distributed to able bodied commoners, though whether to work or own outright is unclear. In any case, whatever its precise nature, it would appear to be an attempt to buttress royal authority by nurturing relations with the peasantry at the expense of the land holding aristocracy.

In fitting culmination to Seongdeok‘s reign, and symptomatic of improving relations with Tang, in 735 Tang Emperor Xuanzong formally granted the Silla king the territory south of the Pae River (the modern Daedong River running through Pyongyang), land that had been held at least formally by Tang ever since the seventh century and the Tang–Silla campaigns that had toppled Goguryeo.

The Emille Bell of King Seongdeok

King Gyeongdeok, who was the second of Seongdeok's two sons who ruled after Seongdeok, commissioned an enormous bell as a memorial to his father. The largest bell ever struck in Korea, craftsmen had great difficulty in casting it successfully. The first casting was not successful, and the government officials and monks were sent out to collect donations to finance the difficult undertaking. Legend tells that a poor peasant woman had no money to donate, but offered her young daughter as a sacrifice to honor King Seongdeok. According to the legend, the young child was thrown into the molton metal, and this time, when the bell was cast, it had a miraculous beautiful tone, like the voice of a young child.

The bell is 3.3m high, with a diameter of 2.27m, and weighs about 20 tons. The bell's sweet sound could be hear up to 40 miles away when struck on a clear day. Though it was commissioned by King Gyeongdeok, the bell was not completed until 771, during the reign of his successor, King Hyegong. The Emille bell now hangs in the National Museum in Gyeongju.

Seongdeok‘s reign was one of relative prosperity and peace. As one Korean scholar has contended, during his rule "...the paramount authority of the throne was finally secured, and with this accomplished the kingdom at last was able to enjoy unaccustomed domestic tranquility" (Lee, Ki–baik 1984).

According to one account in the Samguk Sagi, Seongdeok invented Korea's first water clock, in Korean nugak 漏刻, in 718. However, this is likely a mistaken rendering of Nugakjeon 漏刻典, for elsewhere the Samguk Sagi relates that in 718 the Nugakjeon, or Office of Timekeeping, was established for the first time .

During Seongdeok's reign Buddhism flourished, as evidenced by the large number of monks at Beopjusa Temple. The temple has an enormous iron rice pot, the largest ever cast in Korea, probably in Asia, which was made during Seongdeok's reign, as well as a 4.46m x 2.4m x 0.94 m granite water tank, used to supply rice and water for up to 3,000 monks at the temple.

Regarding the death date of Seongdeok, as period Chinese histories record that in the second month of 737 a Tang envoy was dispatched to confer investiture upon Seongdeok's son Hyoseong as Seongdeok's successor as King of Silla, it has been posited that King Seongdeok in fact died in 736.[1]

In 704, Seongdeok married Lady Baeso 陪昭夫人 (Queen Seongjeong 成貞), the daughter of Gim Wontae. In 715, their son, Junggyeong 重慶, was named Crown Prince and heir presumptive. Shortly thereafter, and for reasons unclear but quite likely having to do with a power struggle at court between the king and the clan of the queen, Queen Seongjeong was evicted from the palace in 716. As further evidence of a possible power struggle, the next year Junggyeong died under circumstances that remain unknown. Following the fall from favor of his first wife, King Seongdeog married Sodeok in 720, the daughter of the minister Gim Sun-won. Kings Hyoseong and Gyeongdeok were among the children of Seongdeok and Sodeok.

Retrieved from https://www.newworldencyclopedia.org/p/index.php?title=Seongdeok_of_Silla&oldid=1080505
Categories:
Hidden category:
This page was last edited on 30 September 2022, at 02:52.
Content is available under Creative Commons Attribution/Share-Alike License; additional terms may apply. See Terms of Use for details.