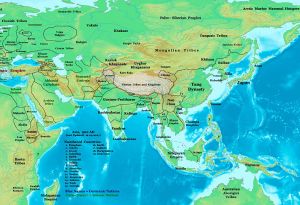 The Samanid Empire at its height.

The Samanids (819–999)Sāmāniyān) were a Persian dynasty in Central Asia and Greater Khorasan, named after its founder Saman Khuda who converted to Sunni Islam despite being from Zoroastrian theocratic nobility. It was among the first native Iranian dynasties in Greater Iran and Central Asia after the Arab conquest and the collapse of the Sassanid Persian empire. Reviving Persian culture, the Samanids spread both Islamo-Persian culture and the Islamic religion deep into the heart of Central Asia. Persian replaced Arabic as the language of governance. The dynasty supported Sunni Islam. It suppressed Ismaili Shiism but tolerated Twelver, which would later become the state religion under the Safavid Dynasty.

The dynasty fell in 999 when their rule was replaced by the Karakhanids. By showing tolerance towards Twelver Shi'a, the Samanids enabled this alternative expression of Islam to survive. Choosing this expression of Islam rather than the Sunni form, which dominated in the Arab world, the Iranian people were able to embed this in their culture in a way they could not have embedded Sunni Islam. The Samanids also encouraged and empowered different ethnic groups such as Tajiks to take pride in their cultural heritage while also identifying themselves as members of the world of Islam. One of the lessons that the Samanid's legacy teaches humanity is that it is possible to take pride in the particularity of our local identities and culture, while yet affirming membership of a wider civilization, indeed of the human race. Loyalty to localized ways of being human that does not clash with but complements other ways of being human will bring about a global shift from competition to cooperation. Only then can humanity build a world of global peace and prosperity.

The Samanid period is considered the beginning of the Tajikistan nation-state (which was a part of Greater Iran). [1] Their rule lasted for 180 years, and their territory encompassed Khorasan, Ray, Transoxiania, Tabaristan, Kerman, Gorgan, and the area west of these provinces up to Isfahan. To legitimize the dynasty, the Samanids claimed to be descendants of Bahram Chobin,[2] and thus descended from the House of Mihrān, one of the Seven Great Houses of Iran. In governing their territory, the Samanids modeled their state organization after the Abbasids, mirroring the caliph's court and organization.[3] They were rewarded for supporting the Abbasids in Transoxania and Khorasan, and with their established capitals located in Bukhara, Samarkand, and Herat, they carved their kingdom after defeating the Saffarids.[2]

The dynasty can be traced to Saman-Khoda, whose grandsons served the Abbadis caliph Al-Ma'mun and were rewarded with provinces in greater Iran. Ismail I (892-907 C.E.) then extended his territory and de facto became an independent ruler, or sultan with his capital at Bukhara. Tradition represents him as an able ruler, an astute politician. He lowered taxes and even took land from the wealthy.

With their roots stemming from the city of Balkh,[1] the Samanids promoted the arts, giving rise to the advancement of science and literature, and thus attracted scholars such as Rudaki and Avicenna. While under Samanid control, Bukhara was a rival to Baghdad in its glory.[4] Scholars note that the Samanids revived Persian more than the Buyids and the Saffarids, while continuing to patronize Arabic to a significant degree.[4] Nevertheless, in a famous edict, Samanid authorities declared that "here, in this region, the language is Persian, and the kings of this realm are Persian kings."[4] They oversaw an urbanization program, developing the existing cities of Bukhara, Samarqand, Merv, Nishapur, Hirat, Balkh, Khujand, Panjekent, and Holbuq into centers of importance.

The Samanids not only revived Persian culture but they also determinedly propagated Sunni Islam. In doing so, the Samanids repressed Ismaili Shiism[6] but remained tolerant of Twelver Shiism.[4] The Samanid state became a staunch patron of Islamic architecture and spread the Islamo-Persian culture deep into the heart of Central Asia. The population within its areas began firmly accepting Islam in significant numbers, notably in Taraz, now in modern day Kazakhstan.

The Samanids patronized science, especially mathematics, astronomy, medicine as well as the humanities, including historiography and philosophy. Literature also flourished. Such activities as mining and agriculture generated revenue and contributed to the welfare of the state. They are said to have sponsored Al-Khwarazmi, the inventor of algebra.[7] They supported public education and generally encouraged creativity and Founding school, colleges and libraries, they accumulated manuscripts by all the leading Muslim scholars. The Sivan al-Hikmat in Bukhara developed a new method to store and retrieve information. It has been said that knowledge from as far off as China reached these academies. Later, much of this knowledge was passed on to the European space through contacts between scholars from Europe and centers of learning in the Muslim world, especially in Andalusia

According to historians, through the zealous missionary work of Samanid rulers, as many as 30,000 tents of Turks came to profess Islam and later under the Ghaznavids higher than 55,000 under the Hanafi school of thought.[4] The mass conversion of the Turks to Islam eventually led to a growing influence of the Ghaznavids, who would later rule the region.

Another lasting contribution of the Samanids to the history of Islamic art is the pottery known as Samanid Epigraphic Ware: plates, bowls, and pitchers fired in a white slip and decorated only with calligraphy, often elegantly and rhythmically written. The Arabic phrases used in this calligraphy are generally more or less generic well wishes, or Islamic admonitions to good table manners. In 999 their realm was conquered by the Karakhanids.

Under Ghaznavid rule, the Shahnameh, was completed. In commending the Samanids, the epic Persian poet Ferdowsi says of them:

"Where have all the great Sassanids gone?
From the Bahrāmids to the Samanids what has come upon?"[8] 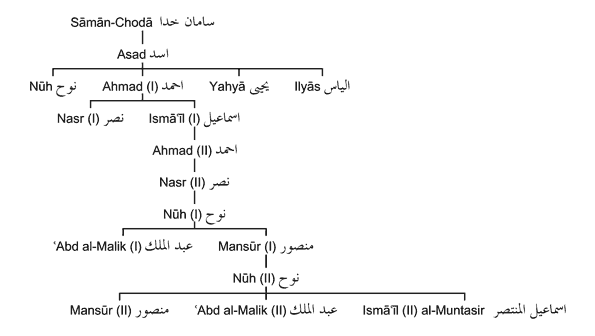 The Amir, through his Chamberlain, appointed provincial governors. A Wazir (prime minister) appointed a cabinet to oversee different areas. At village level, councils reported to the governor. Weights and measures were standardized. Tasks such as street cleaning, distributing water were organized by the village councils. Local officials appointed by the governor dealt with policing and with all except serious legal matters. The Amir also had an intelligence service to keep himself informed of affairs throughout the emirate. The Tajik people were widely employed and trusted and allowed to take pride in their own language and identity, just as Iranians did in theirs but within the broader, shared environment of an Islamic order.

The Samanid legacy lives on in Tajik identity, which they helped to nurture. Non-Arabs under Islamic rule had experienced a degree of discrimination under the Umayyads and although this was less marked under the Abbasids, once they had established their quasi independent state, the Samanids were eager to reassert distinctive Persian identity, to "reestablish their heritage within an Islamic framework."[9] The Sassanids' age was one "of security, progress, and unprecedented achievement in government, the arts and sciences on the one hand, and an age of decadence, barbarity, and intrigue, on the other hand."[9] The Samanids not only enabled Iranians to affirm their cultural identity, they empowered the Tajiks as well by allowing "indigenous people to become acquainted with their true identity, as seen and described by their own people rather than by Arab or Arabized scholars." [9].

The tolerance that the Samanid showed towards Twelver Shi'a enabled this alternative expression of Islam to survive, until under a later dynasty it became the established religion of the Iranian state. Choosing this expression of Islam rather than the Sunni form, which dominated in the Arab world, the Iranian people were able to embed this in their culture in a way they could not have embedded Sunni Islam. One of the lessons that the Samanid's legacy teach humanity is that it is possible to take pride in the particularity of our local identities and culture while yet affirming membership of a wider civilization, indeed of the human race. The hope of many for a unified world of peace is unlikely to become reality if people think they have to relinquish their age-long cultural heritages. A unified world, in which loyalty to localized ways of being human does not clash with other ways of being human will enable people to replace competition with cooperation. Only then can humanity build a world of global peace and prosperity.

Retrieved from https://www.newworldencyclopedia.org/p/index.php?title=Samanid_dynasty&oldid=1078184
Categories:
Hidden category:
This page was last edited on 6 September 2022, at 11:36.
Content is available under Creative Commons Attribution/Share-Alike License; additional terms may apply. See Terms of Use for details.