Saint Francis Solano, also known as Francisco Solano and Francis Solanus (March 10, 1549 – July 14, 1610), was a Spanish missionary in South America, belonging to of the Order of Friars Minor (the Franciscans).

Born near Cordoba, Spain, he joined the Franciscans at the age of 20, later becoming a priest and developing a talent for preaching and music. Although an ascetic, he was known as a joyful presence, as well as a unselfish minister to his people, even at great personal risk. In 1589, he joined a missionary voyage to Peru, where he was assigned to work with the native peoples of today's Argentina and Paraguay. There, he developed a reputation as a remarkable communicator and miracle worker. After 20 years, he returned to Lima, where he spent the remainder of his life preaching, overseeing Franciscan establishments, and working to defend the rights of the indigenous people.

Saint Francis Solano was beautified in 1675 and canonized 1725. He is known as the "Wonder Worker of the New World" and the "Apostle of Peru and Argentina."

Francis Solano was born in Montilla, in the Diocese of Córdoba, Spain. His parents, named Mateo Sanchez Solano and Anna Ximenes, were of the local nobility. His mother reportedly consecrated him to Saint Francis of Assisi while her child was still in the womb. His parents gave him a strongly religious upbringing and education.

When Francis turned 20, he joined the Franciscan Order at Montilla. He became a priest seven years later in 1576. He was an eloquent preacher, but also spent a good deal of time in silent contemplation. During the plague of 1583 at Granada, he ministered heroically to the sick, a sacrifice which resulted in his contracting the disease himself, from which he made a remarkably rapid recovery. His ministry, even in the midst of suffering, was a joyous one, and he was known to sing and dance ecstatically before the image of the Madonna and child, exclaiming, "Look at how well treated the child Jesus is in the arms of Our Lady. That is how he lived on earth! Let’s be happy!” 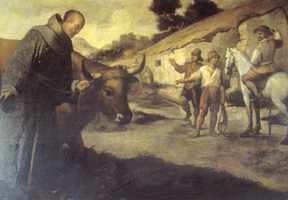 Saint Francis and the bull

A legend tells how one day in the town of San Miguel a ferocious bull escaped and began to attack the local people with a terrible savagery. The townsfolk appealed to Francis. He bravely but calmly confronted the dangerous beast, distracting him from the townsfolk. The bull gently approached Francis and licked his hands, as the people watched in utter amazement. The animal then followed the saint tamely back to its pen.

In 1589, Francis was sent by his superiors to the convent of Arifazza as master of novices. He was soon chosen by Father Balthazar Navarro to join a missionary expedition to the Americas. They sailed first to Panama, then crossed the Isthmus to the Pacific, and boarded another ship for Peru.

They soon encountered a bad storm, however, and the ship's captain ordered her to be abandoned, leaving on board a cargo of African slaves, for whom there was no room in the ship's single lifeboat. Francis, who had been instructing the slaves in the Christian faith, refused to leave them. With the ship breaking up, Francis gathered the men around him and baptized them. Almost immediately, the ship broke asunder and several of the men were swept away. The rest of the hull had lodged firmly around, and there Francis remained with his new flock for three days, encouraging them with prayers, songs, and words of faith. When the storm finally abated, the lifeboat returned to rescued the survivors, who eventually made their way to Lima.

For 20 years, Francis worked at evangelizing the vast regions of Tucuman (present day northwestern Argentina) and Paraguay. He had a skill for languages and succeeded at learning many of the regions' native tongues in a fairly short period. It is said that he had the gift of tongues and could address tribes of different tongues in one language and yet be understood by them all. Being a musician as well, Francis played the lute or the violin frequently for the natives. He was noted for singing hymns to to the Virgin Mary before her altar while playing the lute. Although joyful in his demeanor, he was also an ascetic who fasted often and engaged in frequent acts of penance. Like his namesake, Francis could reportedly communicate with the animal world and was said to have commanded a swarm of grasshoppers to leave a field which a native tribe had recently planted. He was extremely careful about his chastity, and had a rule that women could not come within a hundred paces of his personal dwelling.

After his ministry in Tucuman, Francis was elected to serve as the guardian of the Franciscan convent in Lima, around 1601. He also oversaw the monastic establishments of his order in Tucuman and Paraguay. In Lima, he preached against the corruption of the colonists, called them to repentance, and worked to protect the indigenous peoples from oppression.

In 1610, Francis reportedly predicted the devastating 1618 earthquake of Trujillo, Peru. He is also said to have foretold his own death, which occurred in 1610 at Lima. Remarkably, he died at the moment of the consecration of the Eucharist, his last words being "Glory to God."

Francis' spirituality was already legendary by the mid-seventeenth century, as the painting of Saint Francis and the Bull (1645) clearly shows. Just nine years later, one of the South Sea Armada galleons was named after him.

St. Francis Solano was beatified by Pope Clement X in 1675, and canonized by Pope Benedict XIII in 1726. He is the patron saint of Argentina, Bolivia, Chile, Paraguay, and Peru. His feast day in the Catholic Church is July 14.[1]

Saint Francis became especially popular among the Spanish Franciscans who worked in the Americas. He was reportedly the favorite saint of Father Junipero Sera, the founder of the missions established by the Franciscan friars in California. One of these missions, in Sonoma Valley, is named for Francis Solano. The Franciscan friars there grew grapes and produced sacramental wine from the first vineyard in the area. Today, the region has become a world famous producer of California wines.

Another mission was named for Francisco Solano in Coahuila, Mexico. Numerous schools and churches are named for him as well. The county of Solano, California, was named indirectly for him, deriving its name directly from Chief Solano of the Sisunes tribe, who in turn was named after the saint.

Retrieved from https://www.newworldencyclopedia.org/p/index.php?title=Saint_Francis_Solano&oldid=1078068
Categories:
Hidden category:
This page was last edited on 5 September 2022, at 13:07.
Content is available under Creative Commons Attribution/Share-Alike License; additional terms may apply. See Terms of Use for details.