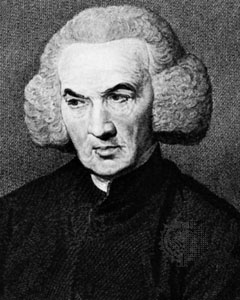 Richard Price (February 23, 1723 - April 19, 1791), was a Welsh moral and political philosopher, a Dissenting minister, and an expert on government finance and insurance, whose writings influenced the philosophy and public life of Britain during the late eighteenth century. His ethical treatise, Review of the Principal Questions and Difficulties in Morals (1757), emphasized the role of reason in making moral judgments. He criticized empiricism as not being able to account for morality’s necessity and for not providing an adequate explanation for moral agency. Price argued that reason contributed to all knowledge, and that it could intuitively discern certain simple and self-evident ideas, such as right and wrong. In determining moral action, Price removed emotions and feelings from the central position and kept them as accompaniments to rational intuition, arguing that acting according to instincts and feelings would be like following a blind guide in the dark.

Two pamphlets which he published in 1771, Appeal to the Public on the Subject of the National Debt and Observations on Reversionary Payments, influenced William Pitt the Elder in reestablishing the sinking fund for the extinction of the national debt. Price became famous for defending the independence of the American colonies in his pamphlet called Observations on the Nature of Civil Liberty, the Principles of Government, and the Justice and Policy of the War with America (1776). He also supported the French Revolution, and was criticized by Edmund Burke in his Reflections on the Revolution in France.

Richard Price was born February 23, 1723, at Tynton, Glamorgan, Wales, the son of a Dissenting minister. Educated privately and at a Dissenting academy in London, he became chaplain and companion to a Mr. Streatfield at Stoke Newington. Streatfield's death and that of an uncle in 1756, improved his circumstances, and on June 16, 1757, he married Sarah Blundell, originally of Belgrave in Leicestershire. A Dissenter like his father, he ministered to Presbyterians near London. In 1758, he published Review of the Principal Questions and Difficulties in Morals, arguing for ethical intuitionism and rationalism, foreshadowing the ethics of Kant.

In 1765, Price was admitted to the Royal Society for his work on probability, which he later used as the basis for a scientific system for life insurance and old age pensions (Observations on Reversionary Payments 1771). In 1767, Price published a volume of sermons, through which he made the acquaintance of Lord Shelburne; this established his reputation and helped determine the direction of his career. In 1769, Price received the degree of doctor of divinity from the University of Glasgow. It was, however, as a writer on financial and political questions that Price became widely known. In 1769, in a letter to Benjamin Franklin, he wrote some observations on life expectancy, the increase of mankind, and the population of London, which were published in the Philosophical Transactions of that year; in May 1770, he presented a paper to the Royal Society on the proper method of calculating the values of contingent reversions. The publication of these papers helped draw attention to the inadequate calculations on which many insurance and benefit societies had recently been formed. In 1771, he published Appeal to the Public on the Subject of the National Debt. This pamphlet excited considerable controversy, and together with Observations on Reversionary Payments (1771), is supposed to have influenced William Pitt the Elder in reestablishing the sinking fund for the extinction of the national debt, created by Robert Walpole in 1716 and abolished in 1733. (The means proposed for the extinction of the debt were described by Lord Overstone as "a sort of hocus-pocus machinery," supposed to work "without loss to any one," and consequently unsound.)

Price then turned his attention to the question of the American colonies. He had from the beginning been strongly opposed to the war, and in 1776, he published a pamphlet entitled Observations on Civil Liberty and the Justice and Policy of the War with America. Several thousand copies of this work were sold within a few days, and a cheap edition was soon issued. The pamphlet was extolled by one set of politicians and attacked by another; among its critics were William Markham, John Wesley, and Edmund Burke. Price rapidly became one of the best- known men in England. He was presented with the freedom of the city of London, and his pamphlet was said to have had considerable influence in determining the Americans to declare their independence. A second pamphlet on the war with America, the debts of Great Britain, and related topics followed in the spring of 1777, and Price thus became identified with the cause of American independence. He was the intimate friend of Benjamin Franklin; he corresponded with Turgot; and in the winter of 1778, he was invited by Congress to go to America and assist in the financial administration of the states. He refused the offer, unwilling to leave his own country and his family connections. In 1781, he received the degree of doctor of divinity from Yale College.

One of Price's most intimate friends was Joseph Priestley, in spite of their opposing views on morals and metaphysics. A correspondence between these two liberal theologians on the subjects of materialism and necessity was published in 1778. Price maintained, in opposition to Priestley, the free agency of man and the unity and immateriality of the human soul. Both Price and Priestley were what would now loosely be called "Unitarians," though they occupied respectively the extreme right and the extreme left positions of that school. Price's opinions seem to have been Arian rather than Socinian.

The pamphlets on the American Revolutionary War made Price famous. He preached to crowded congregations, and, when Lord Shelburne rose to power, not only was he offered the post of private secretary to the premier, but it is said that one of the paragraphs in the king's speech was suggested by him and even inserted in his own words. In 1786, Mrs. Price died. They had had no children. Price’s own health was failing, and the remainder of his life appears to have been clouded by solitude and dejection. Only the progress of the French Revolution cheered him. On April 19, 1791, he died, worn out with suffering and disease.

Much of Price's most important philosophical work was in the field of ethics. His entire theory was explained in Review of the Principal Questions in Morals (1757). The first of its ten chapters, though a small part of the whole, contains a complete demonstration of his ethical theory. The remaining chapters investigate details of minor importance, and are especially interesting as they show his relation to Butler and Kant (ch. iii and vii). The work is supposed to be a refutation of Francis Hutcheson, but is more constructive than polemical. The theory he propounds is closely allied to that of Cudworth, but is interesting mainly in comparison with the subsequent theories of Kant.

Price was also a friend of the mathematician and clergyman Thomas Bayes. He edited Bayes' most famous work Essay towards Solving a Problem in the Doctrine of Chances, which contains Bayes' Theorem, one of the most fundamental theorems of probability theory. Price wrote an introduction to Bayes' paper that provides some of the philosophical basis for Bayesian statistics.

Price also wrote Essay on the Population of England (2nd ed., 1780) which directly influenced Thomas Robert Malthus; two Fast-day Sermons, published respectively in 1779 and 1781; and Observations on the importance of the American Revolution and the means of rendering it a benefit to the World (1784). A complete list of his works is given as an appendix to Dr. Priestley's Funeral Sermon. His views on the French Revolution are denounced by Edmund Burke in his Reflections on the Revolution in France. References to Price's ethical system occur in James Mackintosh's Progress of Ethical Philosophy, Jouffroy's Introduction to Ethics, William Whewell's History of Moral Philosophy in England, and Alexander Bain's Mental and Moral Sciences. Price’s nephew, William Morgan, wrote a memoir about his life.

Price did not like the moral sense theory, especially as advanced by Hume, which favored subjectivism and allowed instinct and feeling to determine human conduct. Price argued that reason contributed to all human knowledge. Reason, not emotion, was authoritative in moral concerns, and it could discern objective moral distinctions. Locke believed that all simple ideas were derived from sensation and reflection; Price held that certain simple and self-evident ideas, such as ideas of right and wrong, were immediately perceived by the understanding. Reason, a distinct intellectual operation, considers the relations among ideas which people already possess. The understanding, however, intuits self-evident ideas that cannot be broken down into mere elements derived from sense-experience. “Common sense” tells people that the understanding has original and self-evident ideas, which are so basic and simple that they cannot be analyzed further.

Price’s rejection of the moral sense theory did not imply a total rejection of an emotional element in morality. Price removed emotions and feelings from the central position and kept them as accompaniments to rational intuition. Price argued that acting according to instincts and feelings would be like following a blind guide in the dark. Instinct “drives” and “precipitates” action, but reason commands and controls it. Price conceived of happiness as the destiny envisaged for man by Divine Providence, and of virtuous action as producing happiness. Virtue would ultimately produce perfect happiness. True virtue meant doing right actions simply because they are right, and not in expectation of some other reward. Therefore, true happiness depended on “rectitude.” Price proposed an ethics of integrity that emphasized the duty of each individual to diligently seek out moral truth and then act upon it. Price believed that the moral duty of the individual, to seek out moral truth and determine his actions by it, grounded the values of political liberty, independence, and democracy.

Retrieved from https://www.newworldencyclopedia.org/p/index.php?title=Richard_Price&oldid=1091338
Categories:
Hidden category:
This page was last edited on 14 December 2022, at 01:46.
Content is available under Creative Commons Attribution/Share-Alike License; additional terms may apply. See Terms of Use for details.