Richard Lowell Rubenstein (January 8, 1924 - May 16, 2021) was a renowned American educator in religion, rabbi, and writer, noted particularly for his contributions to Holocaust theology. He was the first American Jewish theologian to address the impact of the events of the Holocaust in Europe on conventional Jewish thought.

His most well-known publication, After Auschwitz, explored radical theological frontiers in Jewish thought. He argued that the experience of the Holocaust shattered the traditional Judaic concept of God, especially as the God of the covenant with Abraham, going so far as to say that we lived in the time of the "death of God." In fact, he did not lose faith in God, but rather his faith was transformed into an understanding that God's purpose extended beyond the traditional understanding of Judaism. He was even bold enough to associate himself with the controversial Unification Church founded by Reverend Sun Myung Moon.

Richard Lowell Rubenstein was born on January 8, 1924 in New York City. He was the son of Jesse George Rubenstein and Sarah Fine Rubenstein, non-observant Jews. They did not celebrate his bar mitzvah.

He attended Townsend Harris High School, and considered entering Unitarian ministry. However, instead he embraced his Jewish heritage and after attending the College of the City in New York from 1940 to 1942, he entered the Hebrew Union College, an institution within the Reform Judaism tradition. He studied there for the rabbinate from 1942 to 1945, while at the same time, he completed his undergraduate education at the University of Cincinnati, and was awarded his Bachelors in 1946. He met his first wife there, Ellen van der Veen, with whom he had three children, Aaron, Hannah, and Jeremy.

Unable to reconcile the thinking of Reform Judaism with the horror of the Holocaust, he then attended the Jewish Theological Seminary of America (Conservative tradition). He and was awarded the Master of Hebrew Letters in 1952 and was also ordained as a rabbi by that institution. He then studied at Harvard Divinity School and was awarded a Master of Sacred Theology degree in 1955. Finally, he pursued doctoral studies and received a Ph.D. from Harvard University, in 1960. His dissertation was entitled "Psychoanalysis and the Image of Evil in Rabbinic Literature," and he remained interested in [1]

He married his second wife, art historian Dr. Betty Rogers Rubenstein, on August 21, 1966. It was her second marriage, having three children from her first marriage. She predeceased him in 2013.

Richard Rubenstein died on May 16, 2021 at age 97 in Bridgeport Hospital, Bridgeport, Connecticut. He was buried at Beth El Cemetery on May 19, 2021, with a service held at his home in Fairfield, Connecticut.

Following his ordination in 1952, Rubenstein was the rabbi of two Massachusetts congregations in succession, and then in 1956 became assistant director of the B'nai B'rith Hillel Foundation and chaplain to the Jewish students at Harvard University, Radcliffe, and Wellesley, where he served until 1958. 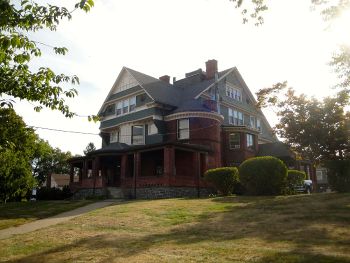 He then taught Religious Studies at Florida State University from 1970 to 1995 and held the Robert O. Lawton Distinguished Professor of Religion professorial chair. After leaving Florida State, he became president and professor of Religion at the University of Bridgeport, where he served from 1995 to 1999.[2] After stepping down from the presidency, he continued as a faculty member and became the director of the Center for Holocaust and Genocide Studies.

In addition to his teaching career, Rubenstein was active in a number of organizations, both academic and socially conscious, including participating in interfaith conferences and serving as head of the Washington Institute for Values and Public Policy.

Rubenstein was a prolific author, writing countless articles for journals and magazines, as well as a number of significant books, most notably his first book, After Auschwitz: Racial Theology and Contemporary Judaism, published in 1966. He continued with Holocaust themes and the influence of that atrocity on the nature of God in Judaism. He also undertook a psychoanalytic study of Paul the Apostle in his book My Brother Paul, published in 1972.

The Holocaust and Death of God

Rubenstein emerged in the 1960s as a significant writer on the meaning and impact of the Holocaust for Judaism. His first book, After Auschwitz, explored radical theological frontiers in Jewish thought. Rubenstein argued that the experience of the Holocaust shattered the traditional Judaic concept of God, especially as the God of the covenant with Abraham, in which the God of Israel is the God of history. Rubenstein argued that Jews could no longer advocate the notion of an omnipotent God at work in history or espouse the election of Israel as the chosen people. In the wake of the Holocaust, he believed that Jews had lost hope:

[A]s children of the Earth, we are undeceived concerning our destiny. We have lost all hope, consolation and illusion.[3]

In After Auschwitz, Rubenstein argued that the covenant had died, and that the only intellectually honest response to the Holocaust was to reject God, and to recognize that all existence is ultimately meaningless. According to this view, there is no divine plan or purpose, no God that reveals His will to humankind, and God does not care about the world. Human beings must assert and create their own value in life. Since that time, Rubenstein moved away from this view; his later works affirm a form of deism in which one may believe that God may exist as the basis for reality and some also include Kabbalistic notions of the nature of God:

He stated that the "death of God" did not mean he was now an atheist, nor that religion had to be discarded as irrelevant. Rubenstein explored what the nature and form of religious existence could possibly be after Auschwitz, after the experience of the Holocaust. He suggested that perhaps the way forward was to choose some form of paganism. He presented in place of the transcendent God who creates and then stands separate from His creation, an understanding of God as the ground of being:

Terms like "ground" and "source" stand in contrast to the terms used for the transcendent biblical God of history who is known as a supreme king, a father, a creator, a judge, a maker. When he creates the world, he does so as do males, producing something external to himself. He remains essentially outside of and judges the creative processes he has initiated. As ground and source, God creates as does a mother, in and through her own very substance. As ground of being, God participates in all the joys and sorrows of the drama of creation which is, at the same time, the deepest expression of the divine life. God's unchanging unitary life and that of the cosmos' ever-changing, dynamic multiplicity ultimately reflect a single unitary reality.[4]

During the 1960s, the "Death of God" movement achieved considerable notoriety and was featured as the cover story of the April 8, 1966, edition of Time magazine. This movement was emerging in radical theological discussions among Protestant theologians such as Gabriel Vahanian, Paul Van Buren, William Hamilton, and Thomas J. J. Altizer. Theologians such as Altizer felt at the time that "as 'Death of God' theologians we have now been joined by a distinguished Jewish theologian, Dr Richard Rubenstein."[5] Among those Protestants, the discussions centered on modern secular unbelief, the collapse of the belief in any transcendent order to the universe, and their implications for Christianity. However, among theologians in Protestant circles, it had dissipated from its novelty by the turn of the 1970s.

Rubenstein was a defender of the Unification Church and served on its advisory council,[1] as well as on the board of directors of the church-owned Washington Times newspaper. In the 1990s, he served as president of the University of Bridgeport, which was then affiliated with the church.[6] Rubenstein said about the church's founder Sun Myung Moon:

I especially appreciated Rev. Moon's commitment to the fight against Communism. From his own first-hand, personal experience and out of his religious convictions, he understood how tragic a political and social blight that movement had been. I had been in East and West Berlin the week the Berlin Wall was erected in August 1961 and had visited communist Poland in 1965. Unfortunately, many of my liberal academic colleagues did not understand the full nature of the threat as did Rev. Moon. I was impressed with the sophistication of Rev. Moon's anti-communism. He understood communism's evil, but he also stood ready to meet with communist leaders such as Mikhail Gorbachev and Kim Il Sung in the hope of changing or moderating their views.[7]

Rubenstein was a renowned scholar and rabbi, whose towering opus addressed the meaning of modern Jewish life in the aftermath of the Holocaust, including its implications for our understanding of God and God's covenant with the Jewish people. He dared to ask penetrating questions about God, and did not limit his intellectual inquiry to traditional understandings of Judaism.

He made a significant contribution to broadening acceptance of New Religious Movements, in particular the Unification Church, having been impressed by its founder Sun Myung Moon's bringing together of Eastern understandings into Western religious thought.

Florida State University named him "Distinguished Professor of the Year," the university's highest academic honor, and in 1994 the university sponsored a scholars' conference on his work in honor of his seventieth birthday, presenting a Festschrift, entitled What Kind of God?, in his honor In February, 2001, the university created the Richard L. Rubenstein Professorship of Religion.

Retrieved from https://www.newworldencyclopedia.org/p/index.php?title=Richard_L._Rubenstein&oldid=1091335
Categories:
Hidden category:
This page was last edited on 14 December 2022, at 01:44.
Content is available under Creative Commons Attribution/Share-Alike License; additional terms may apply. See Terms of Use for details.