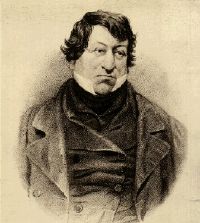 Richard Jones (1790 – January 26, 1855) was a British economist and a clergyman. He is famous for his criticism of David Ricardo and his insistence on the historical relativism of political economy. Jones attacked the Ricardians for their theory of rent, their wages fund doctrine, and their lack of empirical content. Inductivist in his method, Jones' work may be regarded as foundational to the English Historical School, of which well-known members include Walter Bagehot and Thomas E. Cliffe Leslie.

He also worked as a commissioner on the Tithe Commutation Act of 1836. The maps of the area developed during the survey in preparation for the Act had great historical value and have been of great value to genealogists and other historical researchers.

Richard Jones was born in Royal Tunbridge Wells in England, the son of a solicitor. He was intended for the legal profession, and was educated at Gonville and Caius College, University of Cambridge. His university friends included Charles Babbage, John Herschel, and William Whewell. He received his B.A. in 1816 and M.A. in 1819. Due to ill-health, however, Jones abandoned the idea of the law and decided to enter ministry.

In 1817, Jones was ordained priest of the Church of England, and until 1833 he held several ministerial posts in different parishes in Sussex and Kent. During that period he wrote his famous The Essay on the Distribution of Wealth and on the Sources of Taxation (1831) which drew wide nation-wide attention.

Jones took an active part in the commutation of tithes in 1836 and showed great ability as tithe commissioner, an office which he filled till 1851. He also served for some time as charity commissioner.

Jones died on January 26, 1855, in Haileybury, Hertfordshire, England, shortly after he had resigned his professorship.

In 1831, Jones published his Essay on the Distribution of Wealth and on the Sources of Taxation, his most important work. In it he showed himself to be a thorough-going critic of the Ricardian system.

Jones was influenced by the inductivism of Francis Bacon, which played a key role in the development of his economic ideas. Jones' conclusions were founded on a wide observation of contemporary facts, aided by the study of history. He believed that economic theories needed to be rooted in real empirical facts. He thus criticized Ricardo for his deductive method and generalization of laws of economics.

The world Jones studied was not an imaginary world, inhabited by abstract "economic men," but the real world with the different forms that the ownership and cultivation of land, and the conditions of production and distribution, assume at different times and places. His recognition of such different systems of life in communities occupying different stages in the progress of civilization led him to propose what he called a "political economy of nations." This was a protest against the practice of taking the exceptional state of facts which existed in a small corner of our world as representing the uniform type of human society, and ignoring the effects of the early history and unique development of each community as influencing its economic phenomena.

Whilst holding Malthus in perhaps undue esteem, Jones declined to accept the proposition that an increase of the means of subsistence was necessarily followed by an increase of population. He also believed that with the growth of population in all well-governed and prosperous states, the command over food, instead of diminishing, rather increases.

Jones also played an instrumental role in the Tithe Commutation Act of 1836. Being elected by the Archbishop of Canterbury as his representative to the commission to assist in preparing the act, Jones joined other two commissioners - William Balmire (chairman) and Thomas Wentworth Buller.

Before this act, tithes were ten percent of the produce of the land, payable in crops, eggs, cattle, or other goods. They were brought to the rector as payment for his services or as alms, and were stored in a tithe barn attached to a church or a monastery. However, as that became impractical for numerous reasons, other new arrangements surfaced. The commission in which Jones was a member had as its goal to level the national standard for paying tithes.

The commission identified all properties and made detailed maps of all the area affected by the act. A map was made for each "tithe district." Then the amounts of the tithes were calculated. The majority of this work was done between 1841 and 1851.

Unlike Ricardo, whose ideas were absolute and universal, Jones insisted on historical relativism in political economy. He observed real economic phenomena, as occurring at different places and at different times. His Essay on the Distribution of Wealth (1831) can thus be regarded as a precursor of the English Historical School of economists such as Walter Bagehot and the Institutionalist school of economics.

The maps and apportionments that were the result of Jones’ work as Tithe Commissioner have continued to be used as references by genealogists and other historical researchers.