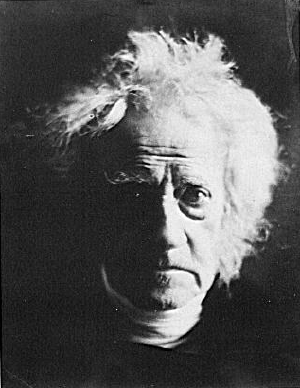 Sir John Frederick William Herschel, 1st Baronet KH (March 7, 1792 – May 11, 1871) was an English mathematician, astronomer, chemist, and experimental photographer/inventor, and the son of astronomer William Herschel. He published several star catalogs based on his own observations, and contributed to the development of photography when it first emerged in 1839. Herschel believed that the study of nature was an avenue to the understanding of God's creation, and was supportive of the design theories of Charles Babbage. 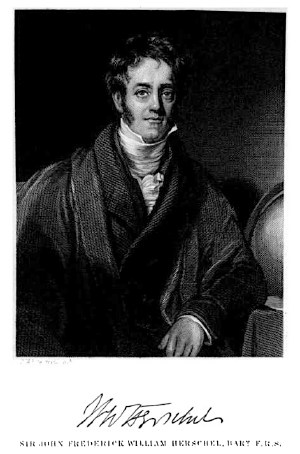 Herschel was born in Slough, Buckinghamshire, the son of William and Mary Herschel. Herschel's father was a world-famous astronomer who had discovered the planet Uranus in 1881, and who continued to make many contributions to astronomy and physics until his death in 1822. When Herschel was seven, he was briefly enrolled at a boarding school at Eaton, but his mother feared the rough treatment he endured there at the hands of the students. He was later placed in a local school, where he made more progress, particularly in languages, although he lagged somewhat in mathematics, not demonstrating an innate proficiency in the subject at that early age.

He later studied at Eton College and St John's College, Cambridge. He graduated as senior wrangler in 1813. It was during his time as an undergraduate that he became friends with computer pioneer Charles Babbage and George Peacock. In 1813, he became a fellow of the Royal Society of London after submitting a mathematics memoir. Herschel, Babbage, and Peacock established a group called the Analytical Society, which championed the introduction into Great Britain of mathematical methods and notation developed on the continent. The group was formed in reaction to the perception that science in England was on the decline, and it blamed this decline at least in part for ignorance of the infinitesimal calculus as developed in France. In 1816, the three translated a popular calculus text by Silvestre François Lacroix, and by 1820, the continental style had taken firm root in Britain. Herschel contributed a volume devoted to the calculus of finite differences in a two-volume work that the society published that same year.

Inspired by the work of William Hyde Wollaston and David Brewster in optics, Herschel was gradually drawn back to the family tradition of studying astronomy that had been established by Herschel's father and his aunt, Caroline Herschel. Herschel assisted his father in making observations and building telescopes. In 1819, he reported the discovery of sodium thiosulfate and its ability to dissolve silver salts. This property was later used extensively in photography.

In 1821, the Royal Society bestowed upon him the Copley Medal for his mathematical contributions to their Transactions. In the same year, accompanied by Charles Babbage, Herschel took a tour of Europe, one of three such excursions he would make in a space of four years. Herschel and Babbage spent much time in the Alps taking measurements and making observations. During a stopover in Paris, they met the naturalist and world traveler Alexander von Humboldt. Von Humboldt would become a lifelong friend of Herschel, and the two would later work together to improve the new science of photography.

Between 1821 and 1823, Herschel re-examined, with James South, the double stars cataloged by his father, and added observations of his own, thus expanding the list of double stars from 850 to 5,075. For this work he was presented in 1826 with the Gold Medal of the Royal Astronomical Society (which he won again in 1836), and with the Lalande Medal of the French Institute in 1825. Also that year, he published monographs on the Andromeda and Orion nebulae, including hand-rendered illustrations of the two objects. He was made a Knight of the Royal Guelphic Order in 1831.

In 1830, Herschel was a candidate for the presidency of the Royal Society of London, but the Duke of Sussex, King George III's son, won the election. After that, Herschel's group gradually distanced itself from the society. In 1833, Herschel published A Treatise on Astronomy. In the same year, the death of his mother and his waning enthusiasm for the activities of the Royal Society prompted him to embark on a long-dreamed-of journey to South Africa, to observe and catalog the stars and other celestial objects observable only from the Southern Hemisphere. This was to be a completion as well as extension of the survey of the northern heavens undertaken initially by his father. He arrived in Cape Town on January 15, 1834. Amongst his other observations during this time was that of the return of Comet Halley.

In addition to his astronomical work, this voyage to a far corner of the British empire also gave Herschel an escape from the pressures under which he found himself in London, where he was one of the most sought-after of all British men of science. While in Africa, he engaged in a broad variety of scientific pursuits free from a sense of strong obligations to a larger scientific community. It was, he later recalled, probably the happiest time in his life.

Upon Herschel's return to England after four years in Capetown, he was welcomed with a dinner attended by about 400 persons, including such notables as Michael Faraday, Charles Darwin, William Rowan Hamilton, Charles Lyell, Charles Babbage, William Whewell, and the antarctic explorer James Ross. In the same year, he was created a baronet. He did not publish Results of Astronomical Observations made at the Cape of Good Hope until 1847. In this publication, he proposed the names still used today for the seven then-known satellites of Saturn: Mimas, Enceladus, Tethys, Dione, Rhea, Titan, and Iapetus. In the same year, Herschel received his second Copley Medal from the Royal Society for this work. A few years later, in 1852, he proposed the names (still used today) for the four then-known satellites of Uranus: Ariel, Umbriel, Titania, and Oberon. 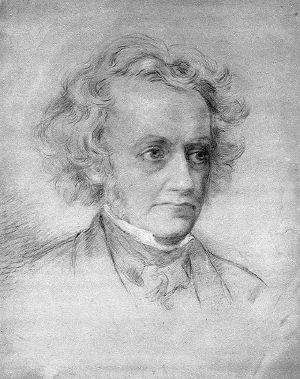 Louis-Jacques-Mandé Daguerre announced his invention of photography in 1839. That same year, Herschel developed his own process of fixing a photographic image, which differed from both Daguerre's and that of another pioneer of photography, Fox Talbot. However, Herschel refrained from publishing a complete account of his process, instead deferring to Talbot, as Herschel was unaware that his process differed from Talbot's. Herschel used paper to capture his images, a process which eventually overtook imagery on metal and glass. He discovered sodium thiosulfate to be a solvent of silver halides in 1819, and informed Talbot and Daguerre of his discovery that this "hyposulphite of soda" ("hypo") could be used as a photographic fixer, to "fix" pictures and make them permanent, after experimentally applying it.

He made numerous experiments on different chemical processes that could produce an image, including organic dyes such as are found in flowers, and recorded and published his results. He invented the cyanotype process and variations, the precursors of the modern blueprint process. He experimented with color reproduction, noting that rays of different parts of the spectrum tended to impart their own color to a photographic paper. He is often credited with coining the words "positive" and "negative," referring to images that reflect the normal and reverse shades in a photographic image. Most of Herschel's work in photography was accomplished between the years 1839 and 1844.

During this same period, he continued to process the data he gathered during his trip to Africa, a process that was time-consuming. He finally finished this grand task in 1847, and published his results.

When HMS Beagle called at Cape Town, Captain Robert FitzRoy and the young naturalist Charles Darwin visited Herschel on June 3, 1836. But after the appearance of Darwin's Origin of the Species, Herschel was, at least at first, not so accommodating to Darwin's ideas, as he believed a directive force, lacking in Darwin's work, was necessary to account for speciation. "We do not believe that Darwin means to deny the necessity of such intelligent direction. But it does not, so far as we can see, enter into the formula of his law; and without it we are unable to conceive how the law can have led to the results" (Hodge and Radick, 2003, p. 182).

Darwin had, however, expected support from Herschel, since Herschel had been on record as saying that the emergence is species is a "natural in contradistinction to a miraculous process." (Hodge and Radick, 2003, p. 181).

In 1861, Herschel wrote, "...an intelligence, guided by a purpose, must be continually in action to bias the directions of the steps of change...." In later remarks, Herschel indicated, however, that he was not inclined to "repudiate" Darwin's hypothesis. (Hodge and Radick, 2003, pp. 182-183).

Babbage, Herschel's friend who is best known for his "difference engine" that is often seen as the precursor of the modern computer, published the The Ninth Bridgewater Treatise, in which he quotes extensively from the correspondence of Herschel in support of his theory of the design of the universe by a creator.[2]

In 1849, Herschel published Outlines of Astronomy, a popular exposition that went through many editions and was considered a must-read in intellectual circles in Britain, although the content was often challenging even to educated minds.

Herschel devoted his later years largely to updating previous publications and corresponding with other scientists.

In 1867, the society photographer Julia Cameron was allowed to complete a series of portraits of Herschel, and these are among the best-known images of the scientist. It is said that Cameron had the scientist's hair washed for the portraits, and fashioned it in a way that radiated a feeling of the romantic that was reflective of the times. She returned to complete another series of photographic portraits in 1869.

In Herschel's later years, he kept up a lively correspondence with his friends and with the scientific community. But gout and bronchitis eventually took its toll as he entered his late 1870s. Herschel lamented the deaths of his close friends such as Peacock, and felt that his was soon to follow.

On May 11, 1871, Herschel died at his home in Collingwood near Hawkhurst in Kent. He was given a national funeral and buried in Westminster Abbey.

Herschel Island (in the Arctic Ocean, north of the Yukon Territory) and J. Herschel crater, on the Moon, are named after him.

John Herschel could have easily been overshadowed by his famous father, who, among his many accomplishments, discovered the planet Uranus. But instead, he first established his own reputation in mathematics before deciding to follow and expand upon his father's path. In his day, he was as legendary as his father, and was the personification of nineteenth-century science, particularly in England. In real terms, he made substantial contributions to many fields, beyond his astronomical exploits. He always remained a firm believer in the divine. In his Preliminary Discourse on the Study of Natural Philosophy, he supported the association of nature with divine creation. This probably brought him into conflict with the theory of evolution proposed by Charles Darwin, although Darwin was quick to point out that Herschel sought to find an explanation for the emergence of species that Darwin's theory attempted to shed light on.