Random access memory (also hyphenated as random-access memory), usually known by its acronym RAM, is a class of media used in computers for data storage and retrieval. A RAM device is designed to allow data to be read or written in any order—that is, "at random." In addition, the speed at which a set of data can be accessed is independent of its location in the device.

In today's computers, the main memory takes the form of a RAM device, which is usually an integrated circuit containing millions of "memory cells." This memory stores software programs as well as other data that are actively being used. RAM is a volatile type of memory, where the information is lost when the power is switched off.

RAM stands in contrast to sequential access memory (SAM), where the reading or writing functions are carried out sequentially. For example, a magnetic tape stores data that can be accessed in only a sequential manner. 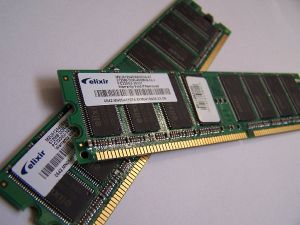 An early type of widespread writable random access memory was the magnetic core memory, developed in 1949-1951. It was used in most computers until the development of the static and dynamic integrated RAM circuits in the late 1960s and early 1970s. Before that, computers used relays, delay lines, or various kinds of vacuum tube arrangements to implement "main" memory functions (that is, hundreds or thousands of bits), some of which were random access, some not. Latches built out of vacuum tube triodes, and later out of discrete transistors, were used for smaller and faster memories such as registers and (random access) register banks. Prior to the development of integrated read-only memory (ROM) circuits, permanent (or read-only) random access memory was often constructed using semiconductor diode matrices driven by address decoders. 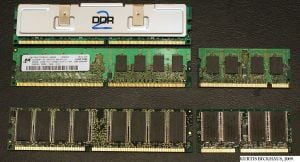 Various types of RAM have been developed. The most common type of semiconductor RAM is called "dynamic random access memory," or DRAM. In this case, each memory cell is formed by pairing a transistor with a capacitor, and each bit of data is stored as an electric charge in a capacitor.[1] There are millions of memory cells in each memory chip. In a DRAM chip, the content (or charge) at every location is held for a fraction of a second and needs to be refreshed repeatedly.[2]

A second type of semiconductor RAM is called "static random access memory," or SRAM. Here, a bit of data is stored in the state of an electronic "flip-flop." An SRAM chip retains its contents at all locations as long as the power supply is present.[2]

Many other types of memory can be classified as RAM as well, including most types of read only memory (ROM) and a kind of flash memory called NOR-Flash. RAM of the read-only type uses a metal mask to permanently enable/disable selected transistors, instead of storing a charge in them. Some types of RAM have circuitry to detect and/or correct random faults called memory errors in the stored data.

As both SRAM and DRAM are volatile, other forms of computer storage, such as disks and magnetic tapes, have been used as "permanent" storage in traditional computers. Many newer products instead rely on flash memory to maintain data between sessions of use: examples include PDAs, small music players, mobile phones, synthesizers, advanced calculators, industrial instrumentation and robotics, and many other types of products; even certain categories of personal computers, such as the OLPC XO-1, Asus Eee PC, and others, have begun replacing magnetic disk with so called flash drives (similar to fast memory cards equipped with an IDE or SATA interface).

There are two basic types of flash memory: the NOR type, which is capable of true random access, and the NAND type, which is not. The former is therefore often used in place of ROM, while the latter is used in most memory cards and solid-state drives, due to a lower price.

Many computer systems have a memory hierarchy consisting of CPU registers, on-die SRAM caches, external caches, DRAM, paging systems, and virtual memory or swap space on a hard drive. This entire pool of memory may be referred to as "RAM" by many developers, even though the various subsystems can have very different access times, violating the original concept behind the random access term in RAM. Even within a hierarchy level such as DRAM, the specific row, column, bank, rank, channel, or interleave organization of the components make the access time variable, although not to the extent that rotating storage media or a tape is variable. (Generally, the memory hierarchy follows the access time with the fast CPU registers at the top and the slow hard drive at the bottom.)

In many modern personal computers, the RAM comes in an easily upgraded form of modules called memory modules or DRAM modules about the size of a few sticks of chewing gum. These can quickly be replaced should they become damaged or too small for current purposes. As suggested above, smaller amounts of RAM (mostly SRAM) are also integrated in the CPU and other ICs on the motherboard, as well as in hard-drives, CD-ROMs, and several other parts of the computer system.

The overall goal of using a memory hierarchy is to obtain the higher possible average access performance while minimizing the total cost of entire memory system.

If a computer becomes low on RAM during intensive application cycles, the computer can perform an operation known as "swapping." When this occurs, the computer temporarily uses hard drive space as additional memory. Constantly relying on this type of backup memory is called thrashing, which is generally undesirable because it lowers overall system performance. In order to reduce the dependency on swapping, more RAM can be installed.

Other uses of the "RAM" term

Other physical devices with read/write capability can have "RAM" in their names: for example, DVD-RAM. "Random access" is also the name of an indexing method: hence, disk storage is often called "random access" because the reading head can move relatively quickly from one piece of data to another, and does not have to read all the data in between. However the final "M" is crucial: "RAM" (provided there is no additional term as in "DVD-RAM") always refers to a solid-state device.

Sometimes, the contents of a ROM chip are copied to SRAM or DRAM to allow for shorter access times (as ROM may be slower). The ROM chip is then disabled while the initialized memory locations are switched in on the same block of addresses (often write-protected). This process, sometimes called shadowing, is fairly common in both computers and embedded systems.

As a common example, the BIOS in typical personal computers often has an option called “use shadow BIOS” or similar. When enabled, functions relying on data from the BIOS’s ROM will instead use DRAM locations (most can also toggle shadowing of video card ROM or other ROM sections). Depending on the system, this may or may not result in increased performance. On some systems the benefit may be hypothetical because the BIOS is not used after booting in favor of direct hardware access. Of course, somewhat less free memory is available when shadowing is enabled.[3]

Several new types of non-volatile RAM, which will preserve data while powered down, are under development. The technologies used include carbon nanotubes and the magnetic tunnel effect. In summer 2003, a 128 KB (128 × 210 bytes) magnetic RAM (MRAM) chip manufactured with 0.18 µm technology. In June 2004, Infineon Technologies unveiled a 16 MB (16 × 220 bytes) prototype again based on 0.18 µm technology. Nantero built a functioning carbon nanotube memory prototype 10 GB (10 × 230 bytes) array in 2004. Whether some of these technologies will be able to eventually take a significant market share from either DRAM, SRAM, or flash-memory technology, however, remains to be seen.

Since 2006, "Solid-state drives" (based on flash memory) with capacities exceeding 642 gigabytes and performance far exceeding traditional disks have become available. This development has started to blur the definition between traditional random access memory and "disks," dramatically reducing the difference in performance. Also in development is research being done in the field of plastic magnets, which switch magnetic polarities based on light.

The "memory wall" is the growing disparity between the speed of the central processing unit (CPU) and that of the memory outside the CPU chip. An important reason for this disparity is the limited communication bandwidth beyond chip boundaries. From 1986 to 2000, CPU speed improved at an annual rate of 55 percent, while memory speed improved at only 10 percent. Given these trends, it was expected that memory latency would become an overwhelming bottleneck in computer performance.[4]

Currently, CPU speed improvements have slowed significantly, partly because of major physical barriers and partly because current CPU designs have already hit the memory wall in some sense. Intel summarized these causes in its white paper titled "A Platform 2015 Workload Model,"[5] as follows:

“First of all, as chip geometries shrink and clock frequencies rise, the transistor leakage current increases, leading to excess power consumption and heat (more on power consumption below). Secondly, the advantages of higher clock speeds are in part negated by memory latency, since memory access times have not been able to keep pace with increasing clock frequencies. Third, for certain applications, traditional serial architectures are becoming less efficient as processors get faster (due to the so-called Von Neumann bottleneck), further undercutting any gains that frequency increases might otherwise buy. In addition, partly due to limitations in the means of producing inductance within solid state devices, resistance-capacitance (RC) delays in signal transmission are growing as feature sizes shrink, imposing an additional bottleneck that frequency increases don't address.”

The RC delays in signal transmission were also noted in a report titled "Clock Rate versus IPC: The End of the Road for Conventional Microarchitectures,"[6] which projects a maximum of 12.5 percent average annual CPU performance improvement between 2000 and 2014. The data on Intel Processors[7] clearly show a slowdown in performance improvements in recent processors. However, Intel's new processors, Core 2 Duo (codenamed Conroe), show a significant improvement over previous Pentium 4 processors; due to a more efficient architecture, performance has increased while clock rate actually decreased.

Contrary to simple models (and perhaps common belief), the contents of modern SDRAM modules aren't lost immediately when the computer is shutdown; instead, the contents fade away, a process that takes only seconds at room temperatures, but which can be extended to minutes at low temperatures. It is therefore possible to get hold of an encryption key if it was stored in ordinary working memory (i.e. the SDRAM modules).[8] This is sometimes referred to as a cold boot attack.

Retrieved from https://www.newworldencyclopedia.org/p/index.php?title=Random_access_memory&oldid=1090885
Categories:
Hidden category:
This page was last edited on 8 December 2022, at 00:35.
Content is available under Creative Commons Attribution/Share-Alike License; additional terms may apply. See Terms of Use for details.