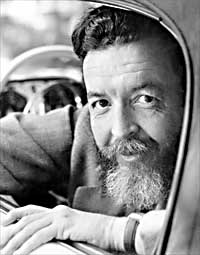 Randall Jarrell (May 6, 1914 - October 15, 1965) was an American poet and literary critic. A key figure in the development of Modernist American poetry, Jarrell's poetry walks a fine line between the deeply symbolic Imagism of poets such as T.S. Eliot and Ezra Pound, and the formal rigor and traditionalism of Robert Frost. Like Frost, Jarrell was a master of strict meter and rhyme, and his poems are praised as some of the most technically masterful in the history of American verse. His subjects, however—war, depression, and anecdotes drawn from his own autobiography—were strikingly modern and realistic. Jarrell is often considered one of the most under appreciated poets of the early twentieth century; although he corresponded closely with a number of other leading poets from both Britain and America, and although his colleagues generally revered his work, Jarrell was writing in the shadows of literary giants, and it is only within recent years that his poetry has been given the serious critical appraisal that it deserves.

In part, Jarrell's significant talents as a poet may have gone unnoticed, ironically, because of his even greater talents in another literary genre: Criticism. Jarrell is unanimously believed to be the most astute and influential critic of the early twentieth century. It was largely thanks to Jarrell's critical essays on Walt Whitman, William Carlos Williams, and Robert Frost that those poets began to receive serious attention from scholars and writers. His critiques of these poets and others—including Eliot, Pound, Moore, and Stevens—in large part still form the foundation for critical analysis of Modernist poetry. He was the most respected (and most feared) poetry critic of his generation, and it was largely through Jarrell's essays and reviews that the literary tastes of the early twentieth century were formed in America.

In addition, Jarrell also attained a great deal of fame in a third field: He was a world-renowned educator, and his influence on young poets was tremendous. As a student himself, Jarrell had interacted with such luminaries as John Crowe Ransom and Robert Lowell; later, as an instructor, he would see a number of major poets come through his classroom. In particular, Jarrell had a major influence on several young poets who would go on to become the principle figures of Confessionalism. Jarrell was known to be as harsh a critic to his students as he was to the poets he would excoriate in his reviews, but he was nonetheless praised as a wise and compassionate teacher who helped many poets find their own voices. Through his poetry, his essays, and his pedagogy, Jarrell has had an enormous impact on twentieth century American literature—the full extent of his influence has yet to be fully appreciated.

Jarrell was a native of Nashville, Tennessee, and graduated from Vanderbilt University. At Vanderbilt, he became acquainted with a group of poets, writers, and critics known as the Fugitives. The Fugitives were a reactionary group, created explicitly to counter what they perceived as the more radical tendencies of Modernism. They were devoted to a degree of traditionalism in poetry and art, as well as to the unique culture of the American South. Among the Fugitives were a number of figures who would go on to become the leaders of the New Criticism, including John Crowe Ransom, Cleanth Brooks, Robert Penn Warren, and Allen Tate. Jarrell came particularly under the spell of John Crowe Ransom, and when Ransom left Vanderbilt for Kenyon College in Gambier, Ohio, Jarrell followed. At Kenyon, Jarrell wrote a masters thesis on the poetry of A.E. Housman, and roomed with a young Robert Lowell, who had also transferred to Kenyon to study under Ransom.

In 1942, Jarrell joined the U.S. Air Corps, the same year he published his first volume of poems, Blood for a Stranger. He soon transferred to a post in the U.S. Army, where he served as a control-tower operator. His experiences in the armed forces would provide him with the material to write his next major book Little Friend, Little Friend, which is considered to be among the most powerful war poetry written in the twentieth century.

On October 14, 1965, while walking along a road in Chapel Hill near dusk, Jarrell was struck and killed by a car. The coroner ruled the death accidental, but Jarrell had recently been treated for mental illness and a previous suicide attempt. In 2004, the Metropolitan Nashville Historical Commission approved placement of a historical marker in his honor, to be placed at Hume-Fogg High School, which he attended

Jarrell's first collection of poetry, Blood from a Stranger, was published in 1942—the same year he enlisted in the United States Army Air Corps. He failed to qualify as a pilot, however, instead working for the Army stateside as a control tower operator. His second and third books, Little Friend, Little Friend (1945) and Losses (1948), drew heavily on his Army experiences, dealing with the fears and moral struggles of soldiers. The Death of the Ball-Turret Gunner is a particularly famous Jarrell poem in this vein. Unlike many of Jarrell's other poems, The Death of the Ball-Turret Gunner is hauntingly modern, spare and stripped of all rhyme and meter and compressed to five harrowing lines, ending with the line:

…When I died they washed me out of the turret with a hose.

During this period, however, he earned a reputation primarily as a critic, rather than as a poet. Encouraged by Edmund Wilson, who published Jarrell's criticism in The New Republic, Jarrell quickly became a fiercely humorous critic of fellow poets. In the post-war period, his criticism began to change, showing a more positive emphasis. His appreciations of Robert Lowell, Elizabeth Bishop, and William Carlos Williams helped to establish their reputations as significant American poets. He is also noted for his essays on Robert Frost—whose poetry was a large influence on Jarrell's own—Walt Whitman, Marianne Moore, Wallace Stevens, and others, which were mostly collected in Poetry and the Age (1953). Many scholars consider him the most astute poetry critic of his generation.

His reputation as a poet was not established until 1960, when his National Book Award-winning collection, The Woman at the Washington Zoo, was published. His final volume, The Lost World, published posthumously in 1966, cemented that reputation; many critics consider it his best work. Jarrell also published a satiric novel, Pictures from an Institution, in 1954—drawing upon his teaching experiences at Sarah Lawrence College, which served as the model for the fictional Benton College—and several children's stories. He translated poems by Rainer Maria Rilke and others, a play by Anton Chekhov, and several Grimm fairy tales. He served as Consultant in Poetry to the Library of Congress—a position today known as Poet Laureate Consultant in Poetry—from 1956-1958.

Retrieved from https://www.newworldencyclopedia.org/p/index.php?title=Randall_Jarrell&oldid=1090884
Categories:
This page was last edited on 8 December 2022, at 00:34.
Content is available under Creative Commons Attribution/Share-Alike License; additional terms may apply. See Terms of Use for details.