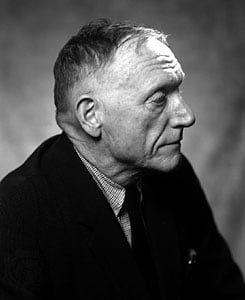 Robert Penn Warren (April 24, 1905 – September 15, 1989) was an American poet, novelist, and literary critic, and was one of the founders of The New Criticism. He was also a charter member of the Fellowship of Southern Writers. While most famous from the success of his novel about Louisiana politician and demagogue, Huey Long—All the King's Men (1946)—Warren also won two Pulitzer Prizes for his poetry and became the first Poet Laureate of the United States in 1986.

Warren's work focused on the moral and spiritual conflicts in the South caused by the clash of values between the older rural culture and the modern urban realities.

Warren was born in Guthrie, Kentucky, on April 24, 1905. He graduated from Clarksville High School in Tennessee, Vanderbilt University in 1925, and the University of California, Berkeley in 1926. Warren later attended Yale University and obtained his B. Litt. as a Rhodes Scholar from New College, Oxford, in England in 1930. That same year he married Emma Brescia, from whom he divorced in 1951. He then married Eleanor Clark in 1952. They had two children, Rosanna Phelps Warren (born July 1953) and Gabriel Penn Warren (born July 1955). Though his works strongly reflect Southern themes and a Southern mindset, Warren published his most famous work, All the King's Men, while a professor at The University of Minnesota and lived the latter part of his life in Fairfield, Connecticut, and Stratton, Vermont. He also received a Guggenheim Fellowship to study in Italy during the reign of Benito Mussolini. He died on September 15, 1989 of complications from bone cancer.

While still an undergraduate at Vanderbilt, Warren became associated with the group of poets there known as the Fugitives, and somewhat later, during the early 1930s, Warren and some of the same writers formed a group known as the Southern Agrarians. He contributed "The Briar Patch" to the Agrarian manifesto, I'll Take My Stand, along with 11 other Southern writers and poets (including fellow Vanderbilt poet/critics John Crowe Ransom, Allen Tate, and Donald Davidson). In "The Briar Patch" the young Warren defends racial segregation, in line with the traditionalist conservative political leanings of the Agrarian group, although Davidson deemed Warren's stances in the essay so progressive that he argued for excluding it from the collection.[1] However, Warren recanted these views in the 1950s by writing an article in Life magazine on the American Civil Rights Movement and adopted a high profile as a supporter of racial integration. He also published Who Speaks for the Negro, a collection of interviews with black civil rights leaders including Malcolm X, in 1965, further distinguishing his political leanings from the more conservative philosophies associated with fellow Agrarians such as Tate, Cleanth Brooks, and particularly Davidson.

Warren served first as the Consultant in Poetry to the [[United States} Library of Congress, then as Poet Laureate in 1944-1945 and went on to win the Pulitzer Prize in 1947 for his best known work, the novel, All the King's Men. The novel's main character, Willie Stark, resembles the radical populist governor of Louisiana, Huey Pierce Long (1893-1935), whom Warren was able to observe closely while teaching at Louisiana State University in Baton Rouge from 1933-1942. Warren won a Pulitzer Prize in poetry in 1958 for Promises: Poems 1954-1956, and again in 1979 for Now and Then. He is the only writer ever to win the Pulitzer in both fiction and poetry. All the King's Men, starring Broderick Crawford, became a highly successful film, winning the Academy Award for Best Picture in 1949. A 2006 film adaptation by writer/director Steven Zaillian featured Sean Penn as Willie Stark and Jude Law as Jack Burden.

In 1981, Warren was selected as a MacArthur Fellow and later was named as the first U.S. Poet Laureate Consultant in Poetry on February 26, 1986. Warren was co-author, with Cleanth Brooks, of Understanding Poetry, an influential literature textbook (which was followed by other similarly coauthored textbooks Understanding Fiction, which was praised by Southern Gothic and Roman Catholic writer Flannery O'Connor, and Modern Rhetoric, written from what can be called a New Critical approach.

In April 2005, the United States Postal Service issued a commemorative stamp to mark the 100th anniversary of Penn Warren's birth. Introduced at the Post Office in his native Guthrie, it depicts the author as he appeared in a 1948 photograph, with a background scene of a political rally designed to evoke the setting of All the King's Men. His son and daughter, Gabriel and Rosanna Warren, were in attendance.