Read-only memory, usually known by its acronym ROM, is a class of storage media used in computers and other electronic devices. In its strictest sense, ROM refers to semiconductor-fabricated memory that contains data permanently stored in it, with no allowance for future modification. This is the the oldest type of solid state ROM and is known as mask ROM.

The simplest type of solid state ROM is as old as semiconductor technology itself. Combinational logic gates can be joined manually to map n-bit address input onto arbitrary values of m-bit data output (a look-up table). With the invention of the integrated circuit came mask ROM. Mask ROM consists of a grid of word lines (the address input) and bit lines (the data output), selectively joined together with transistor switches, and can represent an arbitrary look-up table with a regular physical layout and predictable propagation delay.

In mask ROM, the data is physically encoded in the circuit, so it can only be programmed during fabrication. This leads to a number of serious disadvantages:

Subsequent developments have addressed these shortcomings. PROM, invented in 1956, allowed users to program its contents exactly once by physically altering its structure with the application of high-voltage pulses. This addresses problems 1 and 2 above, since a company can simply order a large batch of fresh PROM chips and program them with the desired contents at its designers' convenience. The 1971 invention of EPROM essentially solved problem 3, since EPROM (unlike PROM) can be repeatedly reset to its unprogrammed state by exposure to strong ultraviolet light. EEPROM, invented in 1983, went a long way to solving problem 4, since an EEPROM can be programmed in-place if the containing device provides a means to receive the program contents from an external source (e.g. a personal computer via a serial cable). Flash memory, invented at Toshiba in the mid-1980s, and commercialized in the early 1990s, is a form of EEPROM that makes very efficient use of chip area and can be erased and reprogrammed thousands of times without damage.

All of these technologies improved the flexibility of ROM, but at a significant cost-per-chip, so that in large quantities mask ROM would remain an economical choice for many years. (Decreasing cost of reprogrammable devices had almost eliminated the market for mask ROM by the year 2000.) Furthermore, despite the fact that newer technologies were increasingly less "read-only," most were envisioned only as replacements for the traditional use of mask ROM.

The most recent development is NAND flash, also invented by Toshiba. Its designers explicitly broke from past practice, stating that "the aim of NAND Flash is to replace hard disks,"[1] rather than the traditional use of ROM as a form of non-volatile primary storage. As of 2007, NAND has partially achieved this goal by offering throughput comparable to hard disks, higher tolerance of physical shock, extreme miniaturization (in the form of USB flash drives and tiny microSD memory cards, for example), and much lower power consumption. 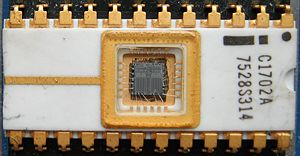 The first EPROM, an Intel 1702, with the die and wire bonds clearly visible through the erase window.

Classic mask-programmed ROM chips are integrated circuits that physically encode the data to be stored, and thus it is impossible to change their contents after fabrication. Other types of non-volatile solid-state memory permit some degree of modification:

There are other types of non-volatile memory that are not based on solid-state IC technology, including: 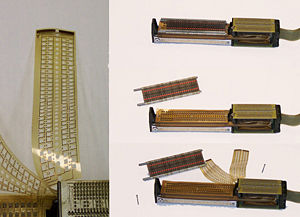 Although the relative speed of RAM vs. ROM has varied over time, as of 2007 large RAM chips can be read faster than most ROMs. For this reason (and to make for uniform access), ROM content is sometimes copied to RAM or "shadowed" before its first use, and subsequently read from RAM.

For those types of ROM that can be electrically modified, writing speed is always much slower than reading speed, and it may require unusually high voltage, the movement of jumper plugs to apply write-enable signals, and special lock/unlock command codes. Modern NAND Flash achieves the highest write speeds of any rewritable ROM technology, with speeds as high as 15 MiB/s (or 70 ns/bit), by allowing (indeed requiring) large blocks of memory cells to be written simultaneously.

Because they are written by forcing electrons through a layer of electrical insulation onto a floating transistor gate, rewritable ROMs can withstand only a limited number of write and erase cycles before the insulation is permanently damaged. In the earliest EAROMs, this might occur after as few as 1,000 write cycles, while in modern Flash EEPROM the endurance may exceed 1,000,000, but it is by no means infinite. This limited endurance, as well as the higher cost per bit, means that flash-based storage is unlikely to completely supplant magnetic disk drives in the near future.

The time span over which a ROM remains accurately readable is not limited by write cycling. The data retention of EPROM, EAROM, EEPROM, and Flash may be limited by charge leaking from the floating gates of the memory cell transistors. Leakage is exacerbated at high temperatures or in high-radiation environments. Masked ROM and fuse/antifuse PROM do not suffer from this effect, as their data retention depends on physical rather than electrical permanence of the integrated circuit (although fuse re-growth was once a problem in some systems).

The contents of ROM chips in video game console cartridges can be extracted with special software or hardware devices. The resultant memory dump files are known as ROM images, and can be used to produce duplicate cartridges, or in console emulators. The term originated when most console games were distributed on cartridges containing ROM chips, but achieved such widespread usage that it is still applied to images of newer games distributed on CD-ROMs or other optical media.

ROM images of commercial games usually contain copyrighted software. The unauthorized copying and distribution of copyrighted software is usually a violation of copyright laws (in some jurisdictions duplication of ROM cartridges for backup purposes may be considered fair use). Nevertheless, there is a thriving community engaged in the illegal distribution and trading of such software. In such circles, the term "ROM images" is sometimes shortened simply to "ROMs" or sometimes changed to "romz" to highlight the connection with "warez."

Use of ROM for program storage

Forms of read-only memory were employed as non-volatile storage for programs in most early stored-program computers, such as ENIAC after 1948 (until then it was not a stored-program computer as every program had to be manually wired into the machine, which could take days to weeks). Read-only memory was simpler to implement since it required only a mechanism to read stored values, and not to change them in-place, and thus could be implemented with very crude electromechanical devices (see historical examples above). With the advent of integrated circuits in the 1960s, both ROM and its mutable counterpart static RAM were implemented as arrays of transistors in silicon chips; however, a ROM memory cell could be implemented using fewer transistors than an SRAM memory cell, since the latter requires a latch (comprising 5-20 transistors) to retain its contents, while a ROM cell might consist of the absence (logical 0) or presence (logical 1) of a single transistor connecting a bit line to a word line.[2] Consequently, ROM could be implemented at a lower cost-per-bit than RAM for many years.

Most home computers of the 1980s stored a BASIC interpreter or operating system in ROM as other forms of non-volatile storage such as magnetic disk drives were too expensive. For example, the Commodore 64 included 64 KiB of RAM and 20 KiB of ROM contained a BASIC interpreter and the "KERNAL" (sic) of its operating system. Later home or office computers such as the IBM PC XT often included magnetic disk drives, and larger amounts of RAM, allowing them to load their operating systems from disk into RAM, with only a minimal hardware initialization core and bootloader remaining in ROM (known as the BIOS in IBM-compatible computers). This arrangement allowed for a more complex and easily upgradeable operating system.

In modern PCs, "ROM" (or Flash) is used to store the basic bootstrapping firmware for the main processor, as well as the various firmware needed to internally control self contained devices such as graphic cards, hard disks, DVD drives, and TFT screens, in the system. Today, many of these "read-only" memories – especially the BIOS – are often replaced with Flash memory (see below), to permit in-place reprogramming should the need for a firmware upgrade arise. However, simple and mature sub-systems (such as the keyboard or some communication controllers in the ICs on the main board, for example) may employ mask ROM or OTP (one time programmable).

ROM and successor technologies such as Flash are prevalent in embedded systems. This governs everything from industrial robots to appliances and consumer electronics (MP3 players, set-top boxes, etc) all of which are designed for specific functions, but nonetheless based on general-purpose microprocessors in most cases. With software usually tightly coupled to hardware, program changes are rarely needed in such devices (which typically lack devices such as hard disks for reasons of cost, size, and/or power consumption). As of 2008, most products use Flash rather than mask ROM, and many provide some means for connection to a PC for firmware updates; a digital audio player's might be updated to support a new file format for instance. Some hobbyists have taken advantage of this flexibility to reprogram consumer products for new purposes; for example, the iPodLinux and OpenWRT projects have enabled users to run full-featured Linux distributions on their MP3 players and wireless routers, respectively.

ROM is also useful for binary storage of cryptographic data, as it makes them difficult to replace, which may be desirable in order to enhance information security.

Use of ROM for data storage

Since ROM (at least in hard-wired mask form) cannot be modified, it is really only suitable for storing data which is not expected to need modification for the life of the device. To that end, ROM has been used in many computers to store look-up tables for the evaluation of mathematical and logical functions (for example, a floating-point unit might tabulate the sine function to facilitate faster computation). This was especially effective when CPUs were slow and ROM was cheap compared to RAM.

Notably, the display adapters of early personal computers stored tables of bitmapped font characters in ROM. This usually meant that the text display font could not be changed interactively. This was the case for both the CGA and MDA adapters available with the IBM PC XT.

The use of ROM to store such small amounts of data has disappeared almost completely in modern general-purpose computers. However, Flash ROM has taken on a new role as a medium for mass storage or secondary storage of files.