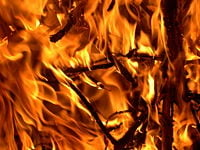 Pyromania is an obsession with fire

Pyromania is an intense obsession with fire, explosives, and their related effects. It is also an obsession with starting fires in an intentional fashion. An individual with pyromania is referred to as a pyromaniac or "pyro" for short. In colloquial English, the synonyms "firebug" and "firestarter" are sometimes used. Pyromaniacs are identified specifically as not having any other symptoms but obsession with fire causing their behavior. Pyromania is distinct from arson; pyromaniacs are also distinct from those who start fires because of psychoses, for personal, monetary or political gain, or for acts of revenge. Pyromaniacs start fires to induce euphoria, and often tend to fixate on institutions of fire control like fire stations and firefighters.

Fire is a wonderful and entrancing thing — a flickering flame is a thing of beauty and endless fascination. Due to our ability to control fire, it has played an enormous role in the development of human civilization. However, control over fire and appreciating its beauty are different from the obsession of the pyromaniac. When starting and watching fires becomes the greatest pleasure in life, and a release from the tensions and stresses of every day, such a person is far from fulfilling their true purpose and potential in life.

'Pyromania is an intense obsession with fire and starting fires. It is distinct from arson, in which fires are started for a particular purpose. The pyromaniac experiences satisfaction from the fire itself, not the damaging results of the fire.

There are six criteria that must be met for a patient to be diagnosed with pyromania[1]:

Pyrophilia is a relatively uncommon condition in which the patient derives gratification from fire and fire-starting activity. It is distinguished from pyromania by the gratification being of a sexual nature. Pyrophilia has been diagnosed in very few instances, and is not fully accepted by the general psychological community.

Some described cases of pyrophilia do not include behaviors commonly associated with pyromania, such as being a regular “watcher” at fires in his neighborhood; setting off false alarms; deriving pleasure from institutions, equipment, and personnel associated with fire, spending time at the local fire station, setting fires in order to be affiliated with the fire department; and either showing indifference to the consequences to life and property caused by the fire or deriving satisfaction from the resulting destruction of property. Sexual gratification need not involve actual fire; arousal or masturbatory aids may include fantasies or talk of setting a fire. In other instances, the patient may derive arousal primarily from setting or watching his fire.

Since 1850, there have been many arguments as to the cause of pyromania — the intense obsession with fire, and starting fires. Whether the condition arises from mental illness or moral deficiency has changed depending on the development of psychiatry and mental healthcare in general.[2]

Few scientifically rigorous studies have been done on the subject, but psychosocial hypotheses suggest pyromania may be a form of communication from those with few social skills, or an ungratified sexuality for which setting fires is a symbolic solution. Medical research also suggests a possible link to reactive hypoglycemia or a decreased concentration of 3-methoxy-4-hydroxyphenylglycol and 5-hydroxyindoleacetic acid (5-HIAA) in the cerebrospinal fluid.[3] Some biological similarities have been discovered, such as abnormalities in the levels of the neurotransmitters norepinephrine and serotonin, which could be related to problems of impulse control, and also low blood sugar levels.[4] Little is known about this impulse control disorder, except some research suggesting there is an environmental component arising in late childhood.[5]

The earliest studies in this field were based on Sigmund Freud’s hypothesis that fire setting represented a regression to a primitive desire to demonstrate power over nature. Other researchers used Freud's notion that fire has a special symbolic relationship to the male sexual urge to explain the fact that pyromania is predominantly a male disorder. A study done in 1940 attributed fire setting to fears of castration in young males, and theorized that adolescents who set fires do so to gain power over adults.

Pyromania is included in the "MacDonald triad" (named after the researcher who popularized it in the 1960s) three childhood behaviors that are considered significant predictors of violent behaviors in adult life: (1) bedwetting at a later than normal age; (2) fire starting, or fascination with fire; and (3) cruelty to animals.[6] However, the validity of the MacDonald triad has been called into question by a number of researchers.

On the other hand, researchers have found that children who are pyromaniacs often have a history of cruelty to animals. They also frequently suffer from other behavior disorders and have learning disabilities and attention disorders. Other studies have linked pyromania to child abuse.[7] Pyromania is rare in adults and more common in childhood and adolescence. Following are some individual and environmental factors found to correlate with pyromania in children and adolescents:

Pyromaniacs are known to have feelings of sadness and loneliness, followed by rage, which leads to the setting of fires as an outlet.[8] For a positive diagnosis, there must be purposeful setting of fire on at least two occasions. There is tension or arousal prior to the act, and gratification or relief when it is over. It is done for its own sake, and not for any other motivation. [9] In some cases it is all about the pleasure of seeing what other people have to do to extinguish the fire, and the pyromaniac may enjoy reading of the effects of what they have done.[10] Many claim that they just like to set fires for the sake of fires and the blaze of dancing flames. Many pyromaniacs feel a relief of stress in watching things burn or smolder, and the condition is fueled by the need to watch objects burn.

Other symptoms that may accompany fire setting include depressed mood, thoughts of suicide, repeated conflicts in interpersonal relationships, and poor ability to cope with stress.

Pyromania is a very rare disorder, and its incidence is less than one percent in most studies; also, pyromaniacs are a very small proportion of psychiatric hospital admissions.[11] Pyromania can occur in children as young as age three, but it is rare in children and even rarer in adults. Only a small percentage of children and adolescents arrested for arson have pyromania. Of all those diagnosed with pyromania, 90 percent are male.[12] Based on a survey of 9282 Americans using the Diagnostic & Statistical Manual on Mental Disorders, 4th edition, impulse-control problems such as gambling and pyromania affect nine percent of the population.[13] And a 1979 study by the Law Enforcement Assistance Administration found that only 14 percent of fires were started by pyromaniacs and others with mental illness.[14]

Behavior modification is the usual treatment for pyromania. Other treatments include seeing the patient's actions as an unconscious process and analyzing it to help the patient get rid of the behavior. Often, this treatment is followed by a more psychodynamic approach that addresses the underlying problems that generated the negative emotions causing the mania.[15] The prognosis for treatment in adults is generally fair to poor, but can increase with a positive therapeutic relationship and a strong motivation to change the behavior.[16]

Treatment of children and adolescents involved with repeated firesetting appears to be more effective when it uses a case-management approach rather than a medical model, because many young fire setters come from chaotic households. Recommended treatment begins with a structured interview with the parents as well as the child, in order to evaluate stresses on the family, patterns of supervision and discipline, and similar factors. The next stage in treatment is typically customized to the individual child and his or her home situation. There are a variety of treatment approaches, including problem-solving skills, anger management, communication skills, and aggression replacement training. Cognitive restructuring may be necessary to address all the emotional and cognitive issues involved in each case.

When begun in childhood, treatment appears to work in 95 percent of children that exhibit signs of pyromania, which include family therapy and community intervention. Community-based intervention programs, some of which have the youngsters spend some time with firefighters who can serve as positive role models. have been effective and help build the child's self esteem. Selective serotonin reuptake inhibitors (SSRIs) are also used to treat this condition. Studies have also shown there are therapuetic benefits associated with playing out the mania in a simulated environment.[17]

Retrieved from https://www.newworldencyclopedia.org/p/index.php?title=Pyromania&oldid=1090771
Categories:
Hidden category:
This page was last edited on 7 December 2022, at 03:40.
Content is available under Creative Commons Attribution/Share-Alike License; additional terms may apply. See Terms of Use for details.