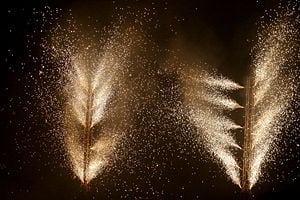 Pyrotechnics are used in the entertainment industry.

Pyrotechnics is generally considered the technology of manufacturing and using fireworks, but its scope is wider and includes items for military and industrial uses. Items such as safety matches, oxygen candles, explosive bolts and fasteners, and the automobile safety airbag all fall under the purview of pyrotechnics. Without pyrotechnics, modern aviation and spaceflight would be impracticable; this is because pyrotechnic devices combine high reliability with very compact and efficient energy storage: Essentially in the form chemical energy which is converted via expanding hot gases often propagated by a shock wave as in bolt and cable cutters.

The controlled action of a pyrotechnic device (initiated by any of several means, including an electrical signal, optical signal, or mechanical impetus) makes possible a wide range of automated and remote mechanical actions, such as the deployment of safety equipment and services, or precisely timed-release sequences. Most of the technical pyrotechnic devices use propellants in their function; a minority use materials that are classified as primary or secondary explosives to obtain very fast and powerful mechanical (mostly cutting) actions.

The use of explosions, flashes, smoke, flames or other propellant driven effects on-stage is known as "Proximate Pyrotechnics." The term "proximate" indicates that it takes place near an audience. Special licensing must be obtained from local authorities to legally prepare and use proximate pyrotechnics.

In general, pyrotechnics can be divided into categories based on the main effects produced. The range of effects include:

A basic pyrotechnic device consists of a sufficiently strong, non-flammable container to hold its active contents. The contents may consist of either flammable compositions, such as nitrocellulose or blackpowder or a mixture of a fuel and oxidizer blended in situ. Various ingredients may be added to provide color, smoke, or sparks.

Special additives are used to modify the character of the effect produced, either to enhance or subdue the effect. For example, the production of an effects—a wave that changes as the effect progresses from several similar devices—to make the similar effect rise or fall towards or away from a crescendo, and so forth. In general, such pyrotechnic devices are initiated by a remote-controlled electrical signal that causes an electric match (or e-match) to produce ignition. The remote control may be manual, via a switch console, or computer controlled, according to a pre-programmed sequence and/or a sequence that tracks the live performance via stage cues.

If not handled and properly pyrotechnics can be dangerous. In 2003, improper use of pyrotechnic devices caused a fire in a Rhode Island nightclub called The Station. The Station nightclub fire was started when fireworks the band, Great White, was using accidentally ignited flammable soundproofing foam, which was not appropriate and/or not installed properly. The foam caused the fire to spread rapidly and the resulting fire led to 100 deaths, ostensibly because quick escape was blocked by ineffective exit doors.

Indoor and/or proximate pyrotechnics is a sub-specialty that requires additional training beyond that of other professional pyrotechnics areas and additionally requires the use of devices especially made for indoor and/or close proximity use. While the type of foam used and the lack of a required sprinkler system were important factors in the fire, the Great White tragedy could have been prevented had those involved paid even minimal attention to standard safety practices around the use of pyrotechnics.

Use by musical groups

Retrieved from https://www.newworldencyclopedia.org/p/index.php?title=Pyrotechnics&oldid=1090773
Categories:
Hidden category:
This page was last edited on 7 December 2022, at 03:53.
Content is available under Creative Commons Attribution/Share-Alike License; additional terms may apply. See Terms of Use for details.